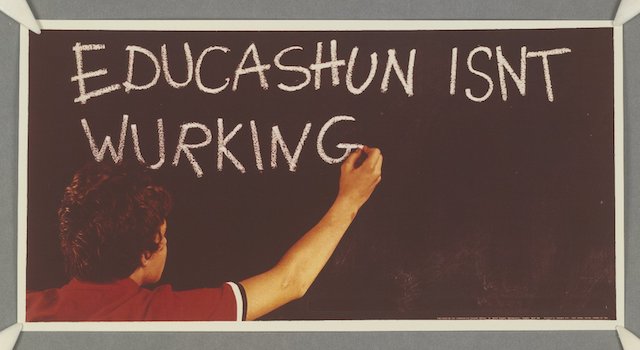 Before the War of Northern Aggression public schools as we have them today did not exist in the South. Mostly, the Southern States had the good sense to leave education where it belonged–in the hands of parents. After the War, public schools were forced upon the defeated South so that the ascendancy of the Radical Republican Deep State of that day could be pushed down the throats of Southern folks so that their children would be taught Yankee/Marxist propaganda passing as education.

That sad version of history has continued to this day and only gotten worse.

It goes without saying that there have been many dedicated and sincere public school teachers over the years. I have known several myself, teachers whose integrity I do not question. They have honestly sought to impart knowledge and truth to the kids they taught. The system they have labored in, however, is corrupt, and has, in a sense sold the honest teachers out, betrayed their efforts.

Since our days in the West Virginia Textbook Protest, back in the mid-1970s, I have studied, where possible, the trajectory of the public school system. Its beginnings as a tool of the anti-Christian Unitarians and socialists has been well documented so I won’t get into it here. I have done so in the past. One source you should check out in this regard is the book Crimes of the Educators – How utopians are using government schools to destroy America’s children. This was written in 2014 by Sam Blumenfeld and Alex Newman and published by World Net Daily. Believe me, it is worth checking out.

Many have mistakenly viewed John Dewey as a paragon of public education. Dewey wasn’t an educator. He was a social engineer. An article on Upstream Politics for 2/28/13 stated that “Dewey and other progressives viewed the school as an agent of change. He was not so much an educator as a social engineer who saw education as a means to an end.” The article continued: “From my limited reading on Dewey I must agree. Education was a Trojan horse through which Dewey and other progressives could effect their utopia…Dewey saw education as an instrument of change.” In other words, Dewey was what we refer to as a “change agent.” He was not there to educate. He was there to change attitudes and social mores–something no parent had given him the authority to tamper with. But he didn’t need parental authority–he just usurped what have never been given to him. And while we are talking about it, the term “progressive” is just another word for socialist!

I got a quote from John Dewey off a site called Liberty Tree. Dewey said: “The teacher is engaged not simply in the training of individuals, but in the formation of the proper social life…In this way, the teacher always in the prophet of the true God and the usherer-in of the true Kingdom of God.” Seeing that Dewey was an atheist and socialist, one has to wonder what, to him, was the “true God.” It certainly was not the God of Holy Scripture–Dewey had long since rejected Him! And what did he consider the Kingdom of God to be? The public school system?

An informative article on The Epoch Times by Alex Newman for 10/24/19 noted: “Widely recognized as the founding father of America’s ‘progressive’ public education system, John Dewey was a man on an unprecedented religious mission. With more fervor and devotion than many Christian missionaries or Islamic jihadists, he set out to win America over to his religious worldview. Like the collectivists whose shoulders he stood upon, government-controlled education was Dewey’s weapon of choice. And now, more than a century after he began, it’s clear that Dewey and his disciples are winning–big time.” And that is not an assertion that Christians should take any comfort in!

Newman continued: “In a previous article in this series, Dewey’s well-known collectivist views were documented, including his fascination with the Soviet Union and his desire to radically transform the United States into a socialist nation.” He utilized the public schools toward that end. Sounds as if AOC and her socialist Democratic friends would have loved Dewey. He wanted what they all long for–a socialist United States and they are not bashful anymore about admitting that.

If you look at all these kids in our day who long for socialism (without really understanding what it is they want), how many of them do you think have been “educated” in public schools? The vast majority have. That tells you what the public schools are really doing!

I wish I knew a way to wake the Christians in this country up to this so they would give a tinker’s damn about it, but if there’s a way to do that, I haven’t discovered it yet.