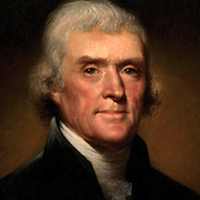 Ten days before the 50th anniversary of the signing of that historical document, and being in poor health, Jefferson was forced to decline an invitation by the committee to honor he and the others, who had so boldly gone where no man had gone before. He sent a letter, which included the following words:

“I should, indeed, with peculiar delight, have met and exchanged there, congratulations personally with the small band, the remnant of that host of worthies, who joined with us on that day, in the bold and doubtful election we were to make for our country, between submission or the sword, and to have enjoyed with them the consolatory fact, that our fellow citizens, after half a century of experience and prosperity, continue to approve the choice we made. May it be to the world, what I believe it will be (to some parts sooner, to others later, but finally to all), the signal of arousing men to burst the chains under which monkish ignorance and superstition had persuaded them to bind themselves, and to assume the blessings and security of self-government. That form which we have substituted, restores the free right to the unbounded exercise of reason and freedom of opinion. All eyes are opened, or opening, to the rights of man. The general spread of the light of science has already laid open to every view the palpable truth, that the mass of mankind has not been born with saddles on their backs, nor a favored few booted and spurred, ready to ride them legitimately, by the Grace of God. These are grounds of hope for others.” 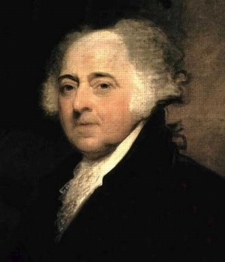 On the eve of the 50th anniversary of the signing of the Declaration of Independence, Thomas Jefferson was in his home at Monticello, struggling to stay alive for one more day. Some 500 miles away in Quincy, Massachusetts, John Adams also lay dying. Adams passed away early on the day of the fourth, his last words reflecting the thoughts of an old friend; “Thomas Jefferson still survives.” Shortly after midnight, Jefferson awoke and asked his granddaughter who stood at his bedside, “Is it the fourth?” She said that it was, and then perhaps, he smiled. In one of the most remarkable coincidences in history, Thomas Jefferson and John Adams – the two great architects of the Declaration of Independence – died within hours of each other on July 4th, 1826, fifty years after they gave birth to this great land of liberty.

John Quincy Adams, Plymouth, Massachusetts, December 22, 1802
…in Commemoration of the Landing of the Pilgrims

Clearing up the confusion about Marbury v. Madison, Feb. 24, 1803
What are the logical implications of the foregoing? That when an act of Congress violates the Constitution, and the issue is brought before a court in a lawsuit, it is the sworn duty of the Court to side with the Constitution and against Congress.

Gouverneur Morris ~ 1804
“I charge you to protect his fame. It is all that he has left.”

Red Jacket Chief, of the Seneca Tribe (1805)
“Brother, we do not wish to destroy your religion or take it from you. We only want to enjoy our own.”

Congressman Daniel Webster (1825)
“Mind is the great lever of all things; human thought is the process by which human ends are ultimately answered.”

Edward Everett ~ 1826
“The fabric of American freedom . . . may crumble into dust. But the cause in which these our fathers shone is immortal.”

Andrew Jackson and the Bankers (1832)

John C. Calhoun (1833) – On Nullification and the Force Bill

President Andrew Jackson – Second Inaugural Address
“Without union, our independence and liberty would never have been achieved; without union they never can be maintained.”

Lt. Col. William Barret Travis (February 24, 1836)
“I call on you in the name of Liberty, of patriotism & everything dear to the American character, to come to our aid, with all dispatch”

Texas Declares Independence from Mexico ~ March 2, 1836
“When a government has ceased to protect the lives, liberty, and property of the people, from whom its legitimate powers are derived, and for the advancement of whose happiness it was instituted; and so far from being a guarantee for their inestimable and inalienable rights, becomes an instrument in the hands of evil rulers for their oppression”

John Quincy Adams (1841) – Before the Supreme Court on Amistad

Jefferson Davis, (1845) ~ Eulogy on the Life and Character of Andrew Jackson

Henry David Thoreau ~ Resistance to Civil Disobedience (1849)
“… government is best which governs least; and I should like to see it acted up to more rapidly and systematically.”

John C. Calhoun, Defender of Constitutional Government
” ..the greatest and gravest question that ever can come under your consideration: How can the Union be preserved?”

Senator Rufus Choate, November 26, 1850
“There are influences that never sleep.”

Henry Clay, The Great Compromiser (1850)
“Let us look to our country and our cause, elevate ourselves to the dignity of pure and disinterested patriots.”

Charles Sumner (May 1856)
“An essential wickedness that makes other public crimes seem like public virtues.”