“Deep Equity”, developed by the Corwin company, is quickly becoming the new standard curriculum being taught in our public schools. If you’ve never heard of it, you soon will. It’s in San Tan valley in Arizona, Chicago, Illinois, Louisville, Kentucky, the entire Cleveland, Ohio public school district, charter schools in California and many more American cities as well as Canada.

“The Deep Equity framework, based on the work of Gary Howard, helps schools and districts establish the climate, protocols, common language, and common goal of implementing culturally responsive teaching practices.

The Deep Equity approach is based on the belief that scholastic inequities are symptomatic of institutional biases and norms that must be directly challenged through systemic, ongoing, and authentic work.

Deep Equity is a comprehensive and systemic professional development process aimed at producing the deep personal, professional, and organizational transformations that are necessary to create equitable places of learning for all of our nation’s children.

Disparities: Translation: The monolithic gap in education between disadvantaged people and those who are privileged.

Culturally responsive teaching practices: Translation: If you’re not white, you will get much more leniency in matters of academic performance.

Organizational transformations: One of Obama’s favorites. Remember the “I’m going to fundamentally Transform the US” speech? In other words, substitute the current white privileged based curriculum for a new Marxist one.

From this, it is clear Deep Equity teaches that America is a deeply racist nation with a “hierarchy of various oppressions,” (intersectionality). It demonizes whites, halts all debate and tells teachers to reject and resist parents who disagree. Social Justice demands that everyone must believe that white people are simply too ignorant and privileged to understand that they are the oppressors within our society.

According to Merriam-Webster, intersectionality is ‘the idea that people whose individual identities overlap with a number of marginalized groups experience multiple, overlapping threats of discrimination’.

Intersectionality has been expanded to include people of all races, genders and classes. Each one is assigned a number of oppressions that they are automatically subjected to by American institutions and society in general. Marxist professors have mapped this all out using Ven diagrams.

“Corwin describes its curriculum “as a teacher training program that is ‘aimed at producing real school improvement for equity and social justice,’” Carlson relates. How does Deep Equity purport to accomplish this?

“Mainly “by attacking the students on the basis of their skin color,” says Carlson.

“According to deep equity, America is based on a hierarchy of various oppressions: Men oppress women, Christianity oppresses Islam, English oppresses Spanish, white people oppress everyone,” the pundit continues. “

“And, by the way, if you have a problem with this explanation, you are yourself entrenching oppression; you are part of the problem. According to Corwin, differences in academic performance have nothing to do with culture or effort; they are purely the product of racism.”

“How does Deep Equity fight this “racism”? By instructing teachers on “different types of ‘white identity orientations,’” Carlson further explained, calling it “pseudoscience.”

“Deep Equity instructs teachers that most white people have a “Fundamentalist White Identity,” defined by “denial,” “ignorance,” and “supremacy,”. However, they might be able to work their way up the ladder to “wokeness,” as the instructional sheet below informs. 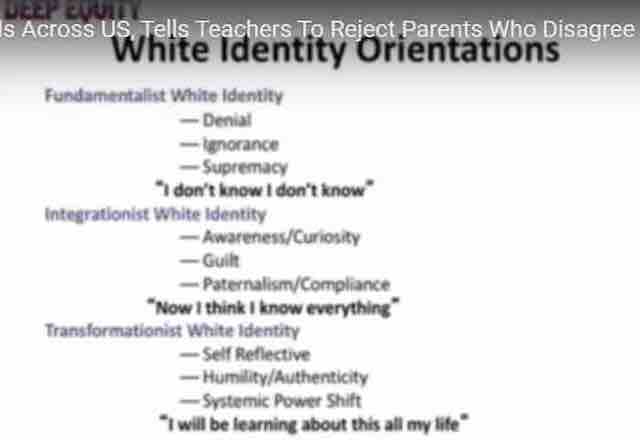 “Moreover if whites are willing to respectfully and obediently sit at the feet of their edified betters and learn “their whole life,” they can advance to what the curriculum called the “White Allies Action Agenda,” whose instructions for becoming a “woke” white person are below.

We must fight this type of systematic indoctrination in our schools 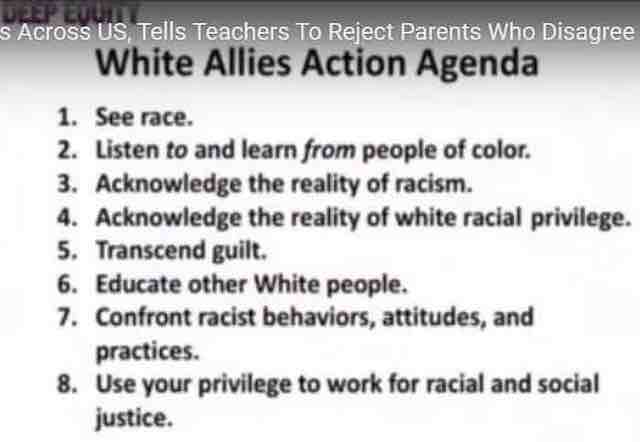 Carlson’s team spoke to a teacher who has used Deep Equity who maintains that the curriculum forces educators to become “racial activists”.

It’s a divisive, resentment-rousing program “certain to confuse and wound and divide our kids of all colors,” as Carlson states.

And if you think, “This couldn’t possibly be in my kid’s school,” think again. “It’s taught all over, even in places such as Fauquier County, Virginia, which voted for President Trump by 25 points, Carlson points out.”

How can radical social engineering exist in the “better” school districts? Remember that whether in the city or country, the schools’ educators come from the same teachers’ colleges and are similarly indoctrinated. School administrators tend to be far more left-wing than their respective communities and it’s no surprise that the radicalism taught by Deep Equity is spreading rapidly.

“Moreover, “No one will ask you if you like it or not, and don’t bother to complain,” notes Carlson. “Deep Equity orders teachers, and we’re quoting now, ‘to explicitly reject and resist any parents who disagree with it.’”

“Unfortunately, in government and private schools, the only “side” presented is the one that wants to “love” your kids to death – and it’s killing our civilization. This is why support for homeschooling is registering a marked increase. “

As the “participation trophy” mentality increases in the educational establishment, parents are forced into this choice. 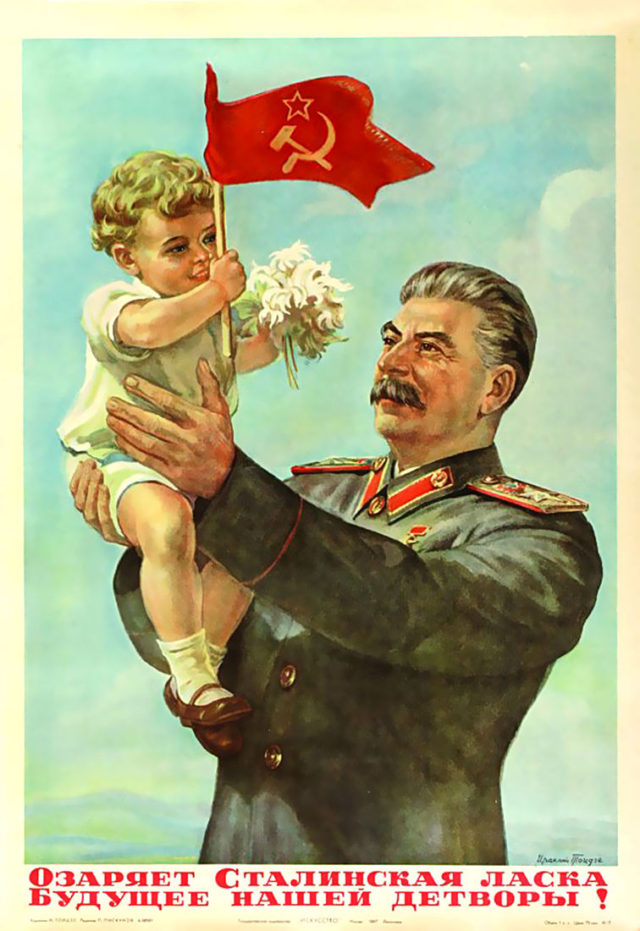 The left also wants people to believe they can avoid physical gender-based reality. This is a Marxist system of indoctrination where any student can decide what gender and even what race they want to be. The teachers of the minority students get to decide what grade they get in English, Mathematics and other stem fields so they don’t fail. Social justice in action.

Arizona State Representative Kelly Townsend said, “Before we spend $400,000 plus on a Deep Equity program, we first need to invest into the basics to address our own academic neglect. For example, more than half of our 3rd graders are unable to read proficiently and yet we prioritize social engineering”.

“These programs may please the politically correct, but it is academically wrong to spend time on anything else while our students are failing,” continued Townsend. “Let’s get back to basics.”

We must fight this type of systematic indoctrination in our schools. If the kids are all brainwashed with this far left propaganda, what will happen to our country when they grow up and start voting? We could see the constitution destroyed along with our liberty and freedom. That’s why I believe that the knowledge of what Deep Equity is doing to our public schools is so important to understand.