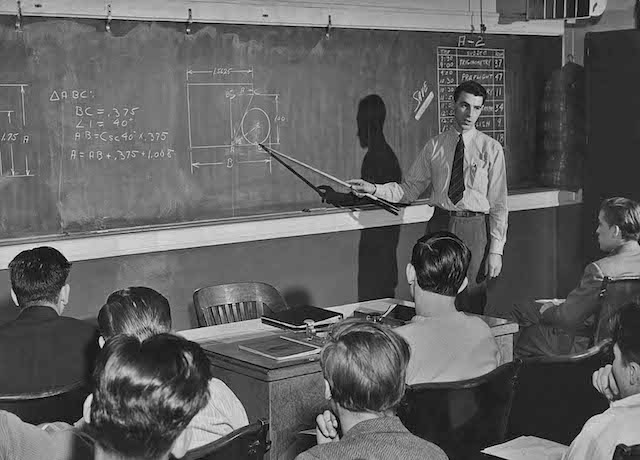 Back in the 60s and early 70s, some of the best minds were in the education field. These were veteran teachers, who had begun their careers in the 50s, some earlier, but their sole purpose was to TEACH, TO EDUCATE, not indoctrinate, not by rote or Common Core….. The methods taught by these teachers, by which we serious students learned to think for ourselves, grasped our studies in civics and government, how to figure math in our heads, learn to parse sentences, spell, read profusely, and use critical thinking skills, are probably verboten or not used any more.

We won’t discuss the execrable gender bending and social engineering extant in the classrooms, now, which wastes teacher time, student time, resources, and taxpayer dollars, as well as being idiotic.

The teachers I remember fondly were also the most strict, and the kids loved them, save for the few trouble makers who were indeed, disciplined, as well they should have been. The teachers also recognized students who were hard workers and leaders in the class, and rewarded them with increased responsibilities and work, to which I can attest. There was something for which to strive, and better yourself. None of this “we are all equal” business in the classroom, or dumbing down the studies to the lowest common denominator.

At that age, kids NEED discipline, and I am not talking about swats or other physical methods….I am talking about learning to be RESPECTFUL, LISTENING TO THE TEACHER, AND KEEPING YOUR MOUTH SHUT. Be mindful of others, and be courteous, and teach these common niceties by example. If the kids have not learned that at home from their parents, this is where “in loco parentis” comes into play….up to a point. That, as well as serious studies in our nation’s history, science, math, world history, dabbling in art history, music, and the composers….The teachers gave us a solid education as well as learning about the arts, and I appreciate their efforts every day of my life.

The local citizens, mostly farmers and ranchers, did not trifle with the coming protestations among the Left or the subsequently vomited forth teachers and educators from liberal colleges and universities. My rural community actually weeded out a “socialist” from the high school, in the early 70s. The school board felt he was a menace and too much of an influence over the impressionable students, and removed him from teaching. His daughter was in my class and her ongong whines about Daddy were rather tiresome, but he found another teaching position in a much larger city, where he “fit in”. The tentacles and rot were setting in, regardless.

Now we have the total coverage of all things social engineering and mindless indoctrination, and the attacks against Christians and those teachers who have conservative beliefs in our schools. This has been over a period of 45 years, since I graduated early from high school. I find it quite sad that these good teachers, who are also leading by their own examples of morals and ethics, are being castigated for their beliefs. It is one reason the rural folks in my farming and ranching area have teamed up for group home schooling of their children, eschewing the horrid public schools and their indoctrination. It will take a mass movement of home or group schooling by parents and others, to force a change in the public schools. I will not be holding my breath.