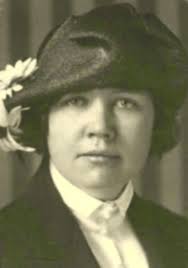 My eight-year-old daughter Abby recently started reading Little House in the Big Woods by Laura Ingalls Wilder. It was prompted, in part, by watching the Little House on the Prairie television episodes with her great-aunt. Coincidentally, I have been reading more lately about some of the key women in history who promoted the ideals of individual freedom, limited government, non-coercion, and voluntary cooperation through trade. Rose Wilder Lane is one of these women. She was born on this day in 1886.

Liberty Should Always Trump Coercion
The daughter of Laura Ingalls Wilder and Almanzo Wilder, baby Rose is the child many of us remember from the ninth Little House book, The First Four Years.

Perhaps those years of growing up on the prairie instilled in Lane a sense of rugged individualism and self-reliance that ultimately found their way into her writings throughout the 20th century. By the late 1920s, she was said to be one of the highest-paid women writers in the U.S. She became an outspoken critic of Roosevelt’s New Deal, Social Security, and other government programs she felt disempowered individuals and gave greater authority to the state.

In her 1943 book The Discovery of Freedom, Lane makes a compelling case for individual freedom and limited government power. She traces the roots of compulsion in many areas of life, including education, and explains why liberty should always trump coercion. She writes:

American schooling is now compulsory, enforced by the police and controlled by the State (that is, by the politicians in office) and paid for by compulsory taxes. The inevitable result is to postpone a child’s growing-up. He passes from the authority of his parents to the authority of the police. He has no control of his time and no responsibility for its use until he is sixteen years old. His actual situation does not require him to develop self-reliance, self-discipline and responsibility; that is, he has no actual experience of freedom in his youth. (pp. 259-60).

Lane goes on to say that this type of American education, imported from Prussia by 19th-century education reformers, “is ideal for the German state, whose subjects are not expected ever to know freedom,” but it is “not the best preparation for inheriting the leadership of the World Revolution for freedom” (p. 260). She laments the “substitution of compulsory State education for the former American free education,” saying that formerly “American children went to school because they wanted to go, or because their parents sent them,” not because it was mandated of parents under a legal threat of force (p. 258).

As Abby digs into the Little House series (which Lane was instrumental in helping to create to catalog the experiences of her parents), I learn alongside my daughter, fascinated by the life and works of baby Rose, who would grow up to become a pioneer of liberty.

Written by Kerry McDonald for Foundation for Economic Education ~ December 5, 2019