Caution: The following article contains a video that may be deeply disturbing to some viewers. 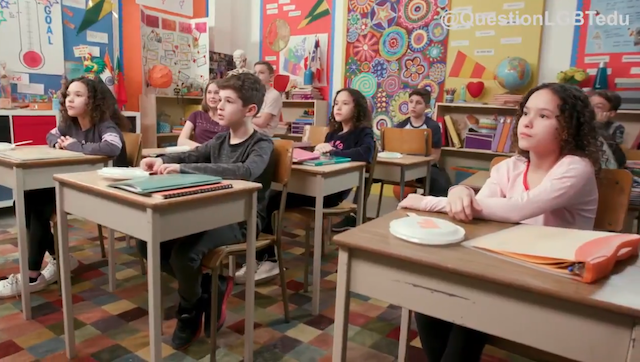 If we’ve learned anything from years of sharing the truth about the leftist agenda, it’s that there is no bottom floor. Every time we think we’ve uncovered the sickest depths of depravity, something more vile and heinous soon proves us wrong.

While the source of the footage is currently unknown, the use of professional lighting, filming, and a clearly staged classroom leads us to believe that this may have been filmed as an educational video or school resource.

The video, shared by an anonymous Twitter user, features a pair of teachers talking “all about the different types of love” with a small group of young male and female students who appear to be between ages 8-13

“True or false: there’s no right or wrong age to fall in love,” the first teacher says, breaking the ice on the topic.

The children, armed with paper plates on sticks marked with a “T” or an “F,” unanimously affirm this highly questionable statement as any decent viewer is left wondering where this is going.

While the teachers should never have been asking such an inappropriate question in the first place, a sensible teacher would have perhaps guided the kids toward the understanding that they are children and that any romantic “love” they may fall into wouldn’t be the same as the kind of love that adults experience when they decided to get married.

Instead, the second teacher confirms the students’ answers, saying, “This is true, people fall in love at all different kinds of ages.”

She then asks the students if any of them are in love right now and, demonstrating their childish innocence, assorted students share that they are in love with “pizza,” “sour candy,” or a favorite teen TV star.

The children seem to inherently understand that their idea of romantic love is different than an adult’s, but nonetheless, determined to tear down that innocence, the teachers proceed to kick up their grooming a few notches.

Editor’s NOTE: Although the following video is not the one originally posted for this column, it is among the few which are available for re-posting. ~ Ed.

The second teacher chimes in with the obligatory leftist tagline and tells the children, “When it comes down to it, love is just love.”

Stop right there! These “teachers” just went from creepy and inappropriate to downright evil!!

There are no polite words to express how unequivocally wrong it is for this sort of “education” to be taking place! How on earth does anyone think this is a good idea, much less enough people to put together a film crew!!

Oh, but it gets worse. Much, much worse.

And, once more, rather than giving a reasonable response that sex is inappropriate for children, the first teacher instead tells them that more often than not they won’t need to have sex because “you can make yourself feel good on your own.”

How we wish we knew the source of this video and where children are being exposed to the sexual grooming propaganda therein so we could start flipping some tables! Even if this is some kind of sick, twisted joke, there are real children in this video having this conversation with adults, being filmed for either the disturbing pleasure of the adults involved or actually meant for educational purposes.

It’s hard to decide which would be worse.

The reality is, in 2019, it wouldn’t even be all that surprising if this were a real educational video for schoolchildren. This is consistent with many, many examples of pornographic sex ed lessons that we have reported on here at this website which are the reason the Sex Ed Sit Out movement was created.

Folks, there is a consistent trend towards exploiting young minds with highly graphic, inappropriate sexual information and material that is far beyond their maturity level, even if it were remotely appropriate for such topics to be discussed in a government school.

We need to fight for our children’s future and for their innocence. For their ability to grow up to have a healthy, moral view of their sexuality once they are old enough to consider the holy institution of marriage to which sex is most safely constrained…and for their childhood to be a childhood until then.