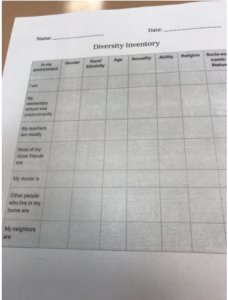 A high school in North Carolina is under fire for an assignment entitled “Diversity Inventory” that left students crying and parents outraged. Heritage High School English teacher Melissa Wilson gave out an assignment to her class last week that asked them to categorize themselves, their parents, their doctor, friends, and more by race, class, sexuality, and religion, among other things.

Students reported that Wilson made them go stand by a sign on the wall that correlated with their sexuality. One student called a parent during the exercise to express her discomfort with it. Another student broke down crying. North Carolina Values Coalition reports.

Students were also asked to stand up, and walk towards posters in different areas of the room that correlated with their sexual identities. Students were traumatized. Some were even brought to tears.

At this morning’s meeting, one parent said that her student had been experiencing PTSD from the incident. Another student didn’t attend school on Friday, and is so scared to return to Wilson’s classroom environment that they told their parent they hoped the hurricane would distract everyone from this incident. Another parent’s child Facetimed them in the middle of the classroom to tell them how uncomfortable they were with the assignment. Another student had a friend who had recently shared very private information about themselves to a select number of their peers, and went white when the teacher asked students to now stand and reveal their private identities.

When the students expressed discomfort, the teacher’s response was to tell them it was alright because she used to be Catholic and is now a bi-sexual atheist.

Colorado Teachers Asked to Take ‘White Privilege’ Survey
PJM reached out to the school for comment and was told by district Communications Director Lisa Luten that the assignment has been removed from the curriculum, but questions remain. The same assignment, without the worksheet, was used by the same teacher in February and met similar criticism. Luten claimed that the assignment had been reworked before being done again. But this go-around the outcry was even greater, resulting in a letter to parents from the principal that read in part,

At Heritage High, we value the opportunity to learn and to grow from challenges we face in teaching and encouraging constructive discussion around sensitive topics.

This week, one of our teachers conducted a classroom activity that included a worksheet titled Diversity Inventory. After learning of concerns from a parent, I reviewed the activity and resource and directed the teacher to discontinue the lesson immediately.

This particular worksheet was not a resource that was provided by our school or our school district. My team and I are committed to working together around the important classroom conversations connected to identity, culture and other sensitive topics as appropriate.

We value efforts to build a classroom community that is inclusive and respectful of all students and backgrounds. But we also must respect and value student privacy, along with their right to engage in discussion about personal identity only when they are comfortable doing so.

The North Carolina Values Coalition found that the teachers at this school district are involved in a district-sponsored program called WCPSS Equity. 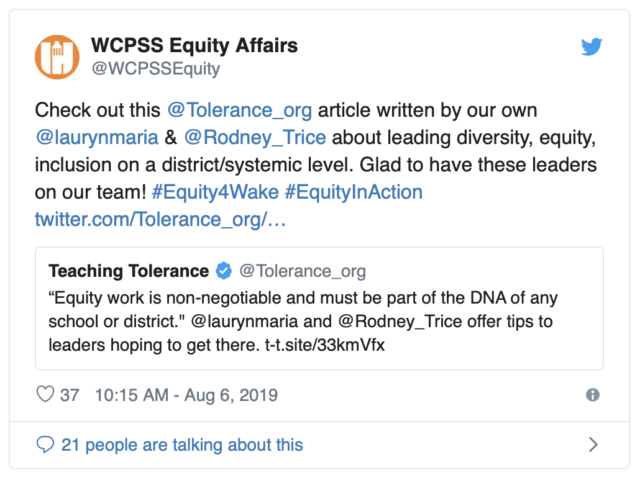 The SPLC Urges Teachers to Talk to Kids About Microaggressions … in First Grade
This office promotes a far-left “social justice” curriculum written by the controversial anti-Christian Southern Poverty Law Center. The assignment, created by Wilson, is taken from lessons found on a website founded by the SPLC called Tolerance.org. The district also contributes to Tolerance.org via articles written by at least one staff member, assistant superintendant of WCPSS, Rodney Trice, who wrote:

Equity work is not a one-off professional development training or an office that works in isolation. This work requires embedded and systemic shifts. Diversity, equity and inclusion must be infused within the very fabric of your organization, school or district. The transportation department needs to be operating with an equity lens just as much as an academic department, and so on. While traditional leadership is top-down, equity leadership looks more like a lattice—everyone from families to support staff to educators all the way to the school board must be in.

A school that operates under the assumption that the fabric of the educational system must be embedded with cultural Marxism and race theory is a school that is interested in churning out nothing but politically and culturally brainwashed students. It also, by default, must necessarily target for censorship any dissenting voices. One wonders how Christian students fare in Ms. Wilson’s class.

The Tolerance.org website is full of far-left propaganda, including lessons about gender that are completely unscientific and based in the far-left fantasy that biological boys can be girls and biological girls can be boys. 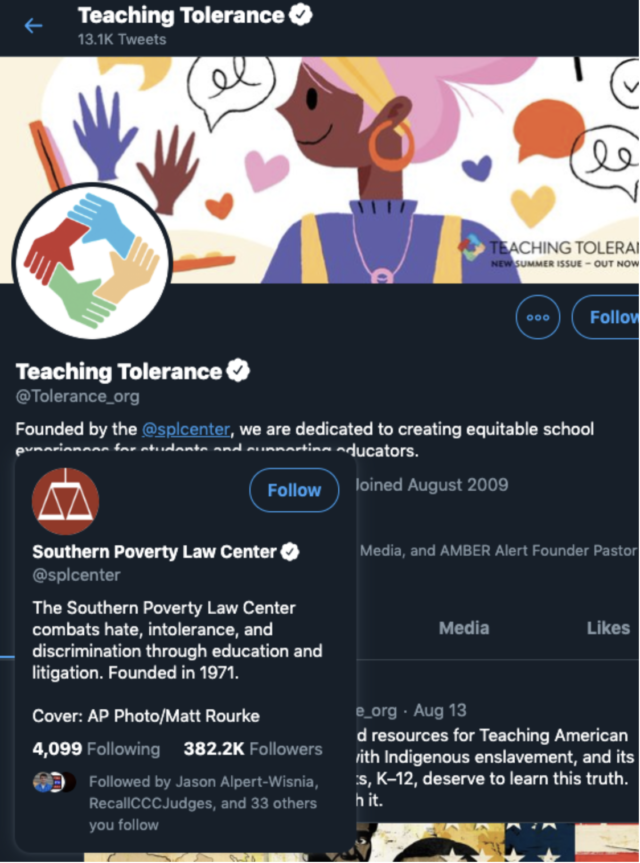 The site also gives away grants to schools that use their radical teaching materials.

Teaching Tolerance Educator Grants support educators who embrace and embed anti-bias principles throughout their schools. These grants, ranging from $500-$10,000, support projects that promote affirming school climates and educate youth to thrive in a diverse democracy.

Luten did not answer whether or not the school is participating in these grant programs through the SPLC. The taxpayers in this North Carolina district ought to be very concerned that their tax dollars are supporting a very organized, subversive movement operated by the district under the WCPSS equity office to infiltrate every academic subject and radicalize students to turn them into good little Democrat voters. Removing this assignment does absolutely nothing to stop the problem. Disbanding the “equity” office and cutting all ties to radical anti-Christian hate groups like the SPLC would be the best place to start rooting it out.

Written by Megan Fox and published by PJ Media ~ September 5, 2019