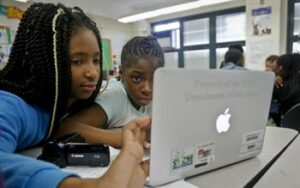 Jude Schwalbach of The Heritage Foundation says there’s a waiting list of nearly 12,000 students wanting to escape poor-performing and dangerous D.C. public schools. So the current budget needs to increase by $7 million to meet the need.

“It’s no surprise at all,” he says, “that parents want to get their kids out of the traditional public school and give their kids a real shot in a safe and healthy academic environment in a private school in the area.”

But the Democrat-controlled House, which oversees the budget, is more likely to favor teachers’ unions which oppose the scholarships, and the teachers unions traditionally support Democrats.

“And I’m sure they’ll make their opposition to the program know,” Schwalbach says of the unionized public school teachers.

An op-ed in The Hill defending the Opportunity Scholarship Program suggested D.C. public schools spend $28,000 per student compared to approximately $9,600 for each OSP student.

D.C. public schools, meanwhile, are facing a $23 million deficit with an annual budget of $900 million, The Washington Post reported.

In the Post story, a school district official called the deficit a “sign of something positive” because much of the spending has gone to overtime pay for teachers for performing jobs beyond their contract. So the extra spending shows teachers are working harder, the official said.

A 2018 ranking of D.C. compared to all 50 states showed it has the worst dropout rate in the country and was ranked 49th overall, behind Louisiana and New Mexico.