At every Olympic Games, a 26.2-mile race celebrates Pheidippides’ grueling run back to Athens to bring news of the great Athenian victory over the Persian army at the Battle of Marathon. According to last year’s California-approved ancient-history textbook from McGraw-Hill, however, the Greeks “defeated the Persian navy.” The author of this text also wrote the 2006 edition of the same book, from the same publisher. That earlier edition correctly describes the battle as a clash of armies.

American ideas of republican, representative government; the dangers of dictatorship; and the tensions between a republic and an empire all come directly from the experience of republican Rome.

Our ideas about democracy and a natural law for all human beings come from the ideas and politics of the Greek poleis. More than 2,000 years ago, Greece and Rome wrestled with what citizenship meant, what freedom meant, what justice meant – just as we wrestle with them today. But in order for us to benefit from what they wrote, we must teach it effectively.

In recent years, debates over math and reading instruction have been intensified by the adoption in virtually all states of the federally promoted Common Core standards in mathematics and English Language Arts (ELA). The new standards move in exactly the wrong direction: they systematically neglect the content of history and literature in favor of reading skills. By narrowing the focus to a single state, California, and a single subject, Greco-Roman history, we can see that the Common Core has done harm.

The most compelling evidence is the decline in quality between two versions of a textbook written by Jackson Spielvogel before and after California adopted the Common Core. Both have been California-approved textbooks for the sixth grade. Spielvogel’s earlier book is much easier to read and has fewer errors.

The earlier edition was a California-specific subset of Spielvogel’s History of the World for middle schools (a different subset is used in Florida). That book is itself a simplified version of his widely used World History for high schools; it is used, for example, in Texas. This California edition follows a conventional narrative structure largely based on chronology, but with digressions on relevant subjects. The illustrations are appropriate and reasonably well-chosen. There is only one “reading skills” interruption per section. A study
that I conducted with Williamson M. Evers and Victor Davis Hanson found some errors, but a clear narrative. Our main complaint was that the text was not engaging enough for younger readers. 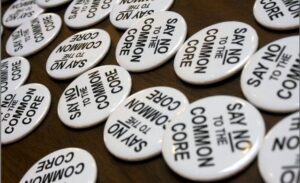 Far from improving the teaching about the ancient world, however, the Common Core has made it more difficult – as shown in the textbook’s later edition, which dispenses with a single clear narrative in favor of a fashionable and confusing hypertext-like structure consisting of a sequence of disconnected units, each with a title and a few paragraphs of text. It appears as if a more continuous text had been broken up into “bites” by a subsequent editor who apparently believed that students cannot absorb a narrative, only short single-topic units. The new edition contains fewer illustrations but many more “reading skills” questions – often one per page.

What is the result of the Common Core changes? The newer text is harder to follow, less interesting, and less well written. More surprisingly, it also has many more errors. We found the same 16 errors in both editions, but an additional 20 errors in the 2019 edition. How do we explain this deterioration? In line with the Common Core focus on “reading skills,” as implemented in 2016 by California’s 855-page “Framework” for history/social-science instruction, textbook publishers now include “reading specialists” in the editorial process. These editors apparently do not know a book’s subject, so their work introduces errors while also seeming to drain life from the text. These changes can be directly attributed to the Common Core.

Reading classes should emphasize reading skills; history classes should focus on content – namely, history. We should make the history and literature of the classical world more memorable – more stories, less hypertext – and we should tie them directly to the American republican experiment. Before 1776, before 1619, before 1492, before AD, there was 490 BC and the Battle of Marathon, which freed Athens to found our civilization. To adapt Milton’s advice, we should “justify the ways of America to her children.” We can’t do that with the Common Core standards, which take exactly the wrong approach to reforming history education.