NOTE: In our personal opinion, we will return to normal if we keep the children OUT of the Public School System and begin to guide them down the proper paths once more. During 2020, we have seen more than ever before just EXACTLY what our school system had done to misguide our kids for at least two generations. ~ Ed.

They say they’re worried about our children’s safety. Don’t believe them. 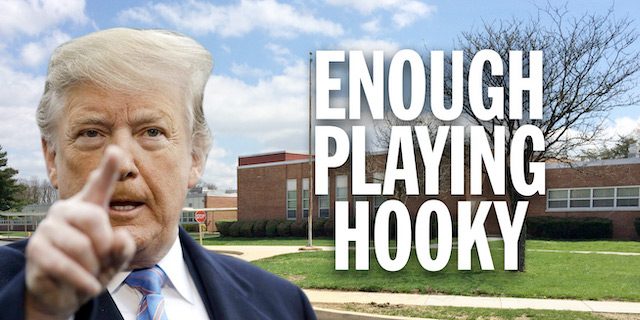 That societal marker, perhaps more than any other, will tell us when we’ve finally gained the upper hand on COVID-19. It’s understandable, then, that the reopening of our schools has become a hot-button issue. And President Donald Trump is on the side of concerned parents across the political spectrum.

“Corrupt Joe Biden and the Democrats don’t want to open schools in the Fall for political reasons, not for health reasons!” the president tweeted on Monday. “They think it will help them in November. Wrong, the people get it!” Earlier today, he upped the ante: “In Germany, Denmark, Norway, Sweden and many other countries, SCHOOLS ARE OPEN WITH NO PROBLEMS. The Dems think it would be bad for them politically if U.S. schools open before the November Election, but is important for the children & families. May cut off funding if not open!”

The battle over our schools seems to fit a pattern — a pattern in which the Democrats and their mainstream-media enablers sow uncertainty and chaos in an effort to derail the Trump presidency between now and November 3. Coronavirus lockdowns, civil unrest, the toppling of statues, the suspension of our professional sports leagues — all of these restrictive measures and more have the support of a particular political party. And only on November 4, when Joe Biden has been elected president and his fellow Democrats have been rightfully returned to power, will order be restored to our lives.

“School districts across the U.S. are working to implement social distancing measures in schools so that kids can return in the fall,” reports Naomi Lim in the Washington Examiner. “Lily Eskelsen Garcia, president of the National Education Association, the nation’s largest educators’ union, has argued that the Trump administration does not have a plan in place to ensure student safety come fall. She responded to Trump’s tweet calling for schools to reopen, saying, ‘You forgot to add the word “SAFELY.”’“

Ah, “SAFELY.” This is the ground on which our nation’s rotten teachers’ unions will do battle. “Think of the children,” they’ll tell us, when in fact our children aren’t at risk at all. The coronavirus mortality data indicates that it’s less lethal for children than the standard flu. Indeed, a normal child’s chance of dying from the coronavirus is just barely above zero.

We have much more data available to us today, and it’s telling us that the coronavirus isn’t nearly as deadly as we’ve been led to believe. But you won’t hear this from the pro-chaos, Trump-deranged media.

According to Stanford professor of medicine and epidemiology Dr. John Ioannidis, the COVID-19 fatality rate is “between 0.02%-0.4%, far lower than the 1%-and-way-up numbers that were once bandied about — and much closer to the 0.1% death rate of the flu.” That’s one person in a thousand for ages across the board, and it’s far, far lower still when we factor out the elderly. Dr. Ioannidis, as the Washington Examiner reports, puts the fatality rate for folks under 45 at “almost zero.”

This comes on the heels of the release of American Academy of Pediatrics guidelines “strongly advocating” that school districts should take precautions but make sure children are “physically present in school.”

But, as for the schools and the Democrats who run them, Fox News’s Laura Ingraham, a mother herself, shed plenty of light on their no-school scheme last night. Her segment is well worth watching.

So when you hear the Democrats, the union reps, and even your local principals and superintendents say that they’re eager to open up the classrooms just as soon as it’s safe for the children, don’t believe them. Because they’re either willfully lying or grossly misinformed.

If our kids aren’t back in school this fall, remember who’s to blame. And be sure to take it out on them on November 3.

Update: In an NBC News interview that took place after this analysis was posted, “five top pediatricians across the country” were unanimous on this point: “The benefits of being in the classroom far outweigh the risk of getting the disease.” And when asked directly about letting their own children go back to school, they responded: “I will. My kids are looking forward to it.” “Yes, period.” “Absolutely. As much as I can. Without a hesitation, yes.” “I have no concerns about sending my child to school in the fall.” “I would let my kids go back to school.”

Written by Douglas Andrews for The Patriot Post ~ July 8, 2020