Critics blast back: ‘Parents have a fundamental constitutional right to raise and educate their children‘ 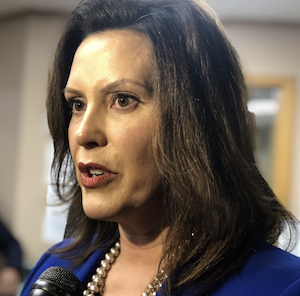 “The Great Lakes Justice Center calls upon Gov. Whitmer to correct this unconstitutional action and assure parents in Michigan that they may continue to safely home school their own children while the EO is in effect,” the organization said in a statement Thursday.

The April 2 order states “in-person instruction for pupils in kindergarten through grade 12 … is suspended for the remainder of the 2019-2020 school year.”

It applies to all “non-public … schools in the state.”

One homeschooler explained to WND that some homeschooling in the state remains allowed, because there are two different statutes that can apply, and only one is targeted by the governor’s order.

“The governor clearly has the authority to close school buildings,” the legal team acknowledged. However, “Michigan law defines home schools as nonpublic schools.”

That means the executive order bars parents from directly teaching their children at home, the organization argued.

“While this may be an unintended consequence of faulty drafting, the EO’s plain language bans all ‘in-person instruction’ of all children.”

Great Lakes Justice spokesman David Kallman said: “The governor has no authority to direct nonpublic schools (i.e., private schools and home schools) to operate their educational programs and processes in any particular way. Further, parents have a fundamental constitutional right to raise and educate their children.”

The organization noted the Michigan Constitution assigns leadership of public education to the State Board of Education, not the governor.

“Gov. Whitmer’s EO usurps the authority of the State Board of Education over public schools,” the organization said. “The governor overstepped her authority by ordering public schools to operate in a certain manner, to mandate educational credit, etc.

“The governor holds no legal authority to enact the expansive educational orders mandated in EO 2020-35. Declaring an emergency to deal with a public health crisis does not bestow control over the public-school system to the governor. When officials improperly exercise power beyond that provided in law it violates principles of good governance and the Rule of Law,” the organization said.

“The Great Lakes Justice Center calls upon Gov. Whitmer to rewrite the EO consistent with the Constitution and the laws of the state of Michigan.”

The governor’s order also dictates the contents of “other than in-person” education.

It also continues food distribution to students, pay for school employees and the provision of “mental health support.”