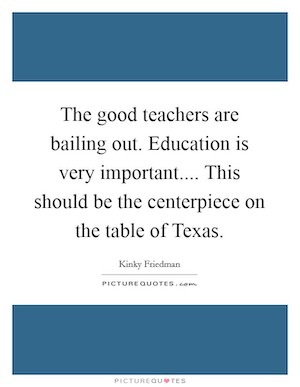 According to a study released last year by the Economic Policy Institute nearly 14% of America’s teachers are either leaving their school or leaving teaching altogether, and school systems are having a hard time replacing them.

Often, it’s because of the pay, but a growing lack of respect for the profession is also to blame.

WPMI spoke with one Alabama teacher who called it quits after just two months on the job.

That’s how long this former Mobile County public school teacher lasted in the classroom and he says his departure had everything to do with a lack of student discipline and support.

“At this point, I wouldn’t want to teach, knowing what I know now,” he said.

“It tainted you on teaching?” the reporter asked.

He’s asked that we conceal his real identity because students are still trying to contact him through social media. But he doesn’t respond.

After four years of college and thousands in student loans, this former middle school science teacher called it quits.

He began having his doubts, he said, from the very first day.

He was told he’d teach about 24 students per class. The reality was between 32 and 36.

And some of those students made it impossible for him to teach and for others to learn.

“Having students playing video games on their phone, just getting up, walking around, yelling at each other as if they were just hanging out at the house instead of at a school where they were there to learn,” he said.

He says when he’d try to reason with the troublemakers, he was ignored. And when he asked for help from the school’s administration, he seldom, if ever, got it.

This teacher is not alone in bailing from the profession because of behavior related issues in the classroom.

Like many states, Alabama is dealing with a teacher shortage and has been for several years. The problem is so bad that last year the state Department of Education created a task force to study the problem, producing an eight-page report recommending solutions.

Those recommendations include better incentives, like more money, loan forgiveness, streamlining the process of certifying new teachers. But nowhere in that report was the problem of student behavior addressed.

And teaching teachers about dealing with behavior issues doesn’t appear to be a high priority item.

We asked the University of South Alabama, a prime source of teachers in Mobile County, if we could see a class focused on dealing with student behavior. We were told there isn’t one.

“A lot of them just get up and quit, or a lot of them don’t come to us. They just come to us afterwards and say, well, I just resigned,” said Abigail Davis, a representative of the Alabama Education Association who assists teachers in Mobile.

So, what is the Mobile County school system doing to help struggling teachers?

A spokesperson tells us there are several options.

The teacher can talk to their school supervisor and human resources administrator.

They can tap into the system’s employee assistance program for help with stress management.

And the system encourages teachers to consult their classroom mentor, an experienced teacher that is paired with new educators to help them work through problems they’ve already faced,

That was something this former teacher says he did on several occasions but found his mentor to be of little help.

But what he saw during his two-month stint at that Mobile County middle school isn’t easy to forget.

“It came out a student had brought a gun to school and had taken pictures of himself and other students in a bathroom mirror,” he said. “That student had already been removed from the school for other things, but it still kind of made me wonder, you know, if having marijuana on campus and bringing guns is just kind of a thing that just happens, at what point is it going to just escalate from that?”

It’s designed to create an atmosphere and environment for learning that the student might not experience at home.