The ghosts of old battles still haunt the Alamo. 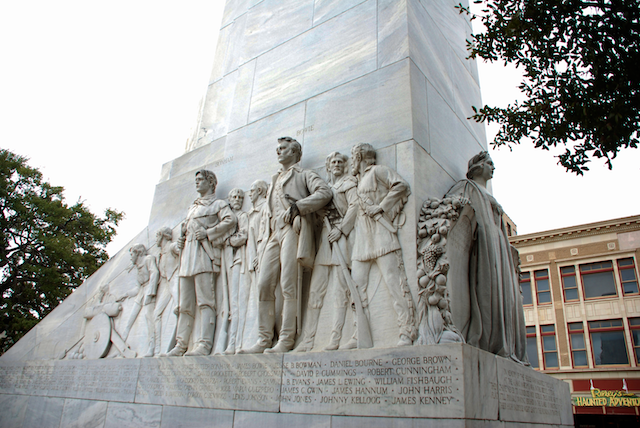 An underdog Indian tribe has joined the progeny of warriors in court to fight George P. Bush for the shrine of Texas liberty. The city’s controversial Alamo redesign plan, a mixed bag of ideas that includes moving the cenotaph off the grounds, has been slowed by an unlikely coalition of Native Americans and preservationists held together by a common ancestry of war. Both groups argue that the mission grounds are a graveyard, protected by state law, with the cenotaph acting as a headstone. United in court, they face Mayor Ron Nirenberg, General Land Office Commissioner George P. Bush and the increasingly foreign management of the embattled mission.

For descendants of the Alamo fighters like preservationist Lee Spencer White, the battle is personal.

“The Alamo is a cemetery, and we can prove it,” White told the Tower. “And the cenotaph is a funerary object. Under state law, you cannot move it off the cemetery.”

In addition to being an illegal removal of a funerary object, White claims moving the cenotaph off the grounds would disrespect the defenders. “They want to make money off them by selling coonskin caps in the gift shop, but you don’t want to honor the ground they bled and died for?” White said. “These were living, breathing people. This isn’t just some ancient history that doesn’t matter.”

White doesn’t understand budgetary arguments for moving the cenotaph. Engineer’s reports state that repairing the cenotaph would cost $140,000 to $160,000. “Just as a taxpayer, why would you spend millions to move the cenotaph when you can spend $200,000 to repair it?”

The Alamo Defenders Descendants Association filed a lawsuit late last year against Bush and the land office, asking the state the halt the cenotaph move. The Tap Pilam Coahuiltecans, a Native American tribe not yet federally recognized, filed an amicus brief with the descendants.

Art Martinez de Vara, who has been representing the Tap Pilam Coahuiltecans in court, says that the state has offered mainly procedural arguments for the cenotaph move.

“In other words, they’re saying, ‘Because we can,’” de Vara said.

While Bush and the land office have kept mum in public about why the cenotaph removal would be justified, they have compared the cenotaph to Confederate monuments in court.

“The General Land Office and the Alamo Trust are aware of the cemetery,” de Vara claims. “The evidence is just overwhelming… Dozens of bodies have been dug up, there was archaeological investigation in the past, there’s 1,300 people in the burial book of the mission… It’s on their public displays that they market. Yet they have refused to acknowledge the existence of the cemetery because it would put a big wrench in their project.”

In addition to recognizing the Alamo as a cemetery alongside the descendants, the Tap Pilam Coahuiltecans have also worshiped at the Alamo–until the arrival of Ohio-based museum consultant Douglass McDonald, paid $2,000 a day to oversee the Alamo.

“The tribe was locked out of ceremonies,” de Vara said. “The Indians have utilized the Alamo for over 300 years as a place of worship… They have themselves interred ancestors, once in the chapel and once in the plaza, and part of their religious beliefs are that once you disturb ancestral remains, there is a forgiveness ceremony that is conducted and there is an annual visit to the graves. They’ve been practicing that for over 25 years, and the Alamo has accommodated them. That stopped this year with the new management of the Alamo.”

The mismanagement of buried bodies at the Alamo has stoked the coals of centuries-old feuds between tribes. The Tonkawa Tribe and Caddo and Seminole Nations of Oklahoma joined the Mescalero Apache and the Alabama-Coushatta Tribe of Texas in a committee organized by Alamo Trust to oversee the archaeological protocols, though none of the tribes claim ancestry from the Alamo. A tribal monitor from the Mescalero Apache has overseen the exhumations of bodies–even though the Apache may have put some of them in their graves.

“The land office and Alamo Trust have conducted the site as if NAGPRA–which is the Native American Graves Protection and Repatriation Act–applies to the site, though they acknowledge that it doesn’t, so they have voluntarily applied a federal law and have weaponized it,” de Vara said. “The reason why they did that is because NAGPRA requires consultation with federally recognized tribes. So they brought in five tribes, four of which have no historical connection with the Alamo, and the one that does was the historic enemy of the Coahuiltecan people and are responsible for approximately 30 of the deaths in the burial.”

White claims that the burials include defenders from the 1836 battle as well as the bodies of Indians who lived in the mission, citing similarities between archaeological finds and the journals of Sgt. Edwart Everett of the First Regiment of Illinois Volunteers during the U.S. War with Mexico. “They found a coffin with just two femur bones inside it, and the Indians did not use coffins,” White said. “This is like finding King Tut’s tomb.”

“I feel frustrated, I feel saddened that I cannot say a prayer over my ancestor,” White said. “I’m for anyone with proof of having an ancestor to be included.”

The removal of the cenotaph has been delayed, halted yet by the groundswell of descendants and worshippers for whom the Alamo is still sacred.

Why are they so intent on moving this historical monument to the Defenders of the Alamo who were instrumental in the quest for Texas Independence? One reason given is that it would “look better” somewhere else. In other words, take away the centerpiece of the Alamo battle. The heroism of the Defenders is what people from all over the world come to see. It is what movies have been made about. It is our proud Texas heritage. The “reimagining” of the Alamo wants to change that. They want the brutal dictator, Santa Anna, to be honored equally. This is after the brutality he inflicted on the Defenders that would be considered war crimes today. What is the big deal about letting a few people spend an hour or so a year having a prayer service in the Alamo in remembrance of their ancestors? Why spend hundreds of millions of taxpayer dollars to dismantle our Texas history when most Texans are opposed to it? I will tell you why. There is money to be made. Millions of investor dollars, and they are fighting to the death to get their hands on it, just like current day Alamo defenders are fighting to save our history. The Texas Historical Commission’s own statute states that no historical monument should be moved unless it is in imminent danger. The only imminent danger the Cenotaph is in is from George P. Bush and his investor friends. By the way, he doesn’t have to get any bids for construction. Our taxpayer dollars are going to get burned up fast. They have already gotten $100 million from the state, and the roof isn’t even fixed yet. That money came from the Texas Rainy Day fund. I imagine that people still trying to recover from Harvey would have appreciated some of that. Then again, that is up to George P. ~ D. Andrle

Removing CSA monuments is an immoral perversion of History by radicals with no constructive ideas. The North invaded for cotton and tariffs not to do Blacks any favors. Jim Crow and Segragation were Northern constructs imposed on the South to facilitate the North’s Textile Industry, which was their #1 revenue source and the reason the North started the War.

After selling the lie the South fought for Slavery against Unionists who fought for Black Suffrage, it is easy to distort the rest of US History with Orwelian cultural cleansing. All Bushs are Yankee Carpet Baggers. ~ Karl Burkhalter