To us Texans, the Alamo is a symbol of how we value freedom and liberty. William Travis, Davy Crockett, Jim Bowie and the other Alamo defenders were heroes because they valued the liberty of their countrymen and land above their own lives. 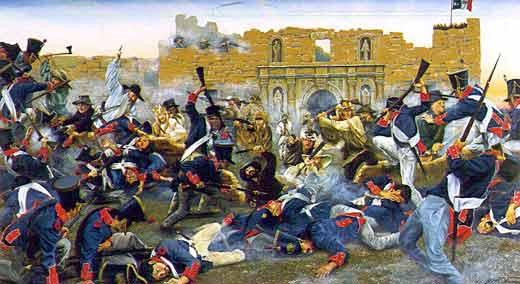 A famous legend about the Alamo entered Texan folklore a few weeks after the notorious siege. Around April of 1836, Santa Anna was fed up with resistance from freedom fighters. To stomp out this lingering flame, he sent a message to his troops in San Antonio, ordering them to burn the mission to the ground. But when his soldiers approached the Alamo, they met a ghastly surprise.

The light from their torches gleamed on the sabers that suddenly appeared in front of them, glistening like red flames in the dark of night. Holding those sabers were six spirits, emerging from the front doors of the mission. “Do not touch the Alamo, do not touch these walls!” they shouted. The group of soldiers, shocked and afraid, ran from the mission, never to return.

To a proud Texan, it is a pleasant myth. The only thing better would be for the same ghosts to reappear when revisionists try to burn the legacy of the Alamo heroes.

To us Texans, the Alamo is a symbol of how we value freedom and liberty. William Travis, Davy Crockett, Jim Bowie and the other Alamo defenders were heroes because they valued the liberty of their countrymen and land above their own lives.

Unfortunately, our own state’s institutions do not see it that way. Nearly two years ago, the Texas State Board of Education sought to remove mentions of the Alamo defenders being “heroic.” Their official statement said that the label was “too vague” or inaccurate.

Disdain for cultural pride of the Alamo is not new.

What’s vague about it? Heroism means self-sacrifice. Heroism means undergoing a trying task for the sake of others. The Oddfellows Cemetery, about a mile from the Alamo, is a testament to the defenders’ heroism.

But the State Board’s decision had little to do with wording. The reason was rather simple: they saw the Alamo as culturally problematic. But why?

Disdain for cultural pride of the Alamo is not new. Academics, artists and pundits have tried to debunk heroism in the Alamo as idealistically flawed. Conflict between the Texan and Mexican perspective of the event is one of their major reasons.

It’s easy for revisionists to trot out the age old line that history is written by the victors. They paint the freedom fighters as disloyal oathbreakers who stole Mexican land, turning their backs to form their own rebel state. In their eyes, the Texans were the real villains, traitors to the Mexican government. Perhaps more popularly, it can also be hard for some to extricate the battles of 1836 from our cultural problems today.

Now, I could go ahead and describe the tyranny forced on the Texan settlers. I could show the various ways in which their rights and liberties were forfeited. I could even emphasize the atrocities committed on those who dared to resist.

But those are not the point.

Instead, imagine the beauty of what drew the settlers to Texas. The viable farmland and plentiful crops. The warm, pleasant Texas sun. The promise of freedom and opportunity in a new world. All these aspects are certainly attractive. But what made Texas worth fighting for, then and now, was the creation of a unique culture and identity.

Being Texan is not just about buying the newest leather boots or sporting a cowboy hat. Nor is it only about baking blueberry pies or decorating the garden with bluebonnets. Texan culture is about something deeper: family, faith and freedom. When the Alamo defenders withstood artillery barrages, they were thinking about the lives of their sons and daughters. They were praying for perseverance and courage throughout the siege. But they also looked past their own lives, hoping that the battle would save the future generations from tyranny.

That is why the Alamo defenders should be considered heroes. Even though they died to stop a dictator forgetting his own country’s laws, they sowed the seeds that would grow into a new nation and become the brashest, greatest state in the Union. Their actions were not vague or misleading. They were deliberate, risking their lives in a hopeless situation, to give hope to future Texan generations.