The raids constituted a horrific, shameful episode in American history, one of the lowest moments for liberty since King George III quartered troops in private homes. 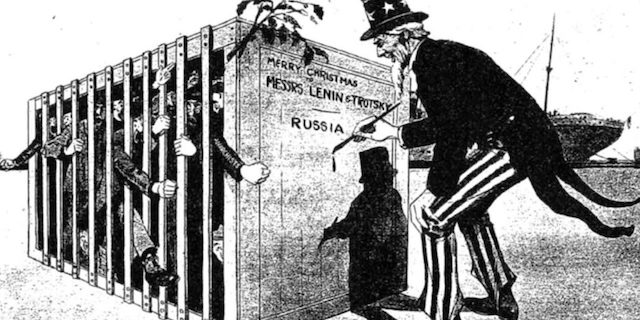 Exactly a hundred years ago this morning – on January 3, 1920 — Americans woke up to discover just how little their own government regarded the cherished Bill of Rights. During the night, some 4,000 of their fellow citizens were rounded up and jailed for what amounted, in most cases, to no good reason at all and no due process, either.

Welcome to the story of the Palmer Raids, named for their instigator, Attorney General A. Mitchell Palmer. Though largely forgotten today, they shouldn’t be. They constituted a horrific, shameful episode in American history, one of the lowest moments for liberty since King George III quartered troops in private homes.

The terror during the night of January 2-3, 1920, shocked and frightened many citizens. In her 1971 book, America’s Reign of Terror: World War I, the Red Scare, and the Palmer Raids, Roberta Strauss Feuerlicht wrote:

[T]error is not just a body count. Terror exists when a person can be sentenced to years in prison for an idle remark; when people are pulled out of their beds and arrested; when 4,000 persons are seized in a single night; and when arrests and searches are made without warrants. Moreover, for each person sent to prison for his views, many others were silenced. The author amply documents the government’s insensitivity to civil liberties during this period, its frequent brutality and callousness, and the personal grief that ensued.

The targets of the Palmer raids were radicals and leftists deemed by the Wilson administration to be hostile to “American values.” Ironically, none of those arrested had done anywhere near as much harm to those values as the man living in the White House — Woodrow Wilson, arguably the worst of the country’s 45 presidents. More on that and the Palmer Raids after some background.

A War on Democracy
This wasn’t the first time the government in Washington had trampled the Bill of Rights. No less than the administration of John Adams, an American founding patriot, briefly shut down newspapers and dissenting opinion with its Alien & Sedition Acts of 1798. Abraham Lincoln suspended the writ of habeas corpus and arrested thousands of political opponents in Northern states.

The most immediate precedents for the Palmer Raids were wartime measures of the same administration just a few years before. Wilson campaigned for re-election in 1916 on a boast that he had “kept us out of war” even as he authorized non-neutral aid for Britain and France. He then feigned surprise when Germany declared unrestricted warfare on ships carrying supplies to its enemies. It was the pretext for American entry into World War I in April 1917.

“Wars are dirty but crusades are holy,” writes Feuerlicht, “so Wilson turned the war into a crusade.” The conflict became “the war to end all wars” and a war “to make the world safe for democracy” while the president made war on democracy at home. 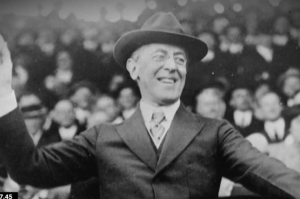 America was formally at war for only a week when Wilson created the Committee on Public Information (CPI). Its job was to convince Americans the war was right and just. A national venture in thought control, it bludgeoned the people with Wilson’s view until it became their view, as well. It was government propaganda on a scale never before seen in the US, flooding the country with CPI-approved war news, speakers, school materials, posters, buttons, stickers – the works.

Two months later, under intense pressure from the White House, Congress passed the Espionage Act. Any person who made “false reports or false statements with intent to interfere” with the official war effort could be punished with 20 years in jail or a fine of $10,000 (at least a quarter-million in today’s dollars), or both. It was amended in May 1918 by the Sedition Act, which made it a crime to write or speak anything “disloyal or abusive” about the government, the Constitution, the flag, or a US military uniform.

Wilson pushed hard for Congress to give him extraordinary powers to muzzle the media, insisting to The New York Times that press censorship “was absolutely necessary to public safety.” According to Christopher M. Finan in his 2007 book, From the Palmer Raids to the Patriot Act: A History of the Fight for Free Speech in America, a blizzard of hostile editorials killed that in Congress, fortunately.

“The Post Office began destroying certain mail instead of delivering it.”

Wilson’s attorney general at the time, Thomas Watt Gregory, strongly encouraged Americans to spy on each other, to become “volunteer detectives” and report every suspicion to the Justice Department. In a matter of months, the department was receiving about 1,500 accusations of disloyalty every single day.

Postmaster General Albert S. Burleson jumped into the cause with both feet, ordering that local postmasters send him any publications they discovered that might “embarrass” the government. The Post Office began destroying certain mail instead of delivering it, even banning certain magazines altogether. An issue of one periodical was outlawed for no more reason than it suggested the war be paid for by taxes instead of loans. Others were forbidden because they criticized our allies, the British and the French. “Throughout the war and long after it ended, [Burleson] was the sole judge of which mailed publications Americans could or could not read,” writes Feuerlicht.

Individuals were hauled into court for expressing reservations about Wilson or his war. One of many examples involved one Reverend Clarence H. Waldron, who distributed a pamphlet claiming the war was un-Christian. For that, he was sentenced to 15 years. In another case, a filmmaker named Robert Goldstein earned a 10-year prison award for producing a movie about the American Revolution, The Spirit of ’76. His crime? Depicting the British in a negative light. They were allies now, so that sort of thing was a no-no.

Of the roughly 2,000 people prosecuted under the Espionage and Sedition Acts, not a single one of them was a German spy. They were all Americans whose thoughts or deeds (almost none of them violent) ran counter to those of the man in the big White House. Hundreds were deported after minimal due process even though they were neither illegal immigrants nor convicted criminals. 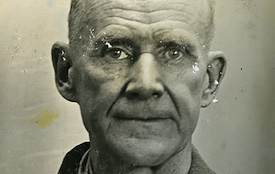 The famous socialist, union activist, and presidential candidate Eugene V. Debs found himself crosswise with Wilson for opposing both the draft and the war. In April 1919, five months after the war ended, he was convicted of “seditious” speech, sentenced to ten years in prison, and denied the right to vote for the rest of his life. Sometime later, when Debs heard that Wilson would refuse to pardon him, he poignantly responded, “It is he [Wilson], not I, who needs a pardon.”

A Night of Terror
Allow me to digress for a moment on the Debs case because it brings to mind a current controversy. President Trump was impeached by the House last month because he allegedly tried to cripple a political opponent by pushing for an investigation into that opponent’s possible corruption. But there was hardly a peep from the media in 1919, even though Debs ran for president four times before and would run yet again, and Wilson himself was flirting with the idea of running for a third term in 1920.

Hostilities in Europe ended in November 1918, but the Wilson administration’s assault on civil rights continued. 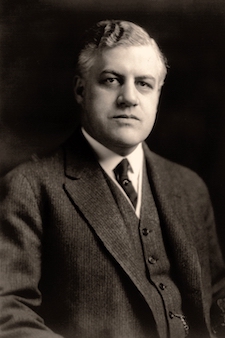 Hostilities in Europe ended in November 1918, but the Wilson administration’s assault on civil rights continued. With the Germans vanquished, the new pretext to bully Americans became known as the “Red Scare”—the notion that communists under the influence of the new Leninist regime in Moscow were the big threat in the country.

Meantime, in March 1919, Wilson hired a new attorney general – A. Mitchell Palmer – who was determined to tackle it one way or another, especially after two attempted bombings of his home. Palmer was just what Wilson was looking for: “young, militant, progressive and fearless,” in the president’s own words.

The first of the two biggest Palmer Raids occurred on November 7, 1919. With Palmer’s newly appointed deputy J. Edgar Hoover spearheading the operation, federal agents scooped up hundreds of alleged radicals, subversives, communists, anarchists, and “undesirable” but legal immigrants in 12 cities—some 650 in New York City alone. Beatings, even in police stations, were not uncommon.

If . . . some of my agents out in the field . . . were a little rough and unkind, or short and curt, with these alien agitators . . . I think it might well be overlooked.

He pointed to a few bombings as evidence that the sedition problem was huge and required “decisive” action.

RELATED: 100 Years Ago, 4,000 Americans, in a Single Night, Were Rounded Up and Caged for Disagreeing With the President

January 2, 1920 – when the largest and most aggressive batch of Palmer Raids was carried out – was a night of terror: about 4,000 arrests across 23 states, often without legitimate search warrants and with the arrestees frequently tossed into makeshift jails in substandard conditions.

Leftists and leftist organizations were the targets, but even visitors to their meeting halls were caught up in the dragnet. No friend of liberty then or now, The Washington Post opined, “There is no time to waste on hairsplitting over infringement of liberties.” A few smaller raids were conducted, but nothing on the scale of January 2-3. 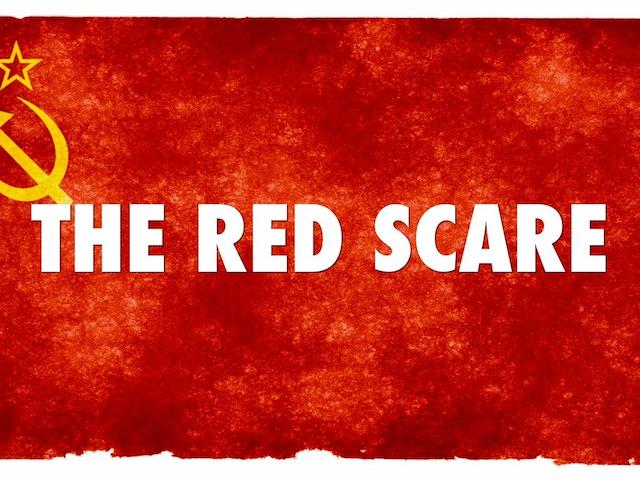 Palmer thought he would ride the Red Scare into the White House, but he lost his bid for the Democratic Party’s nomination later that year. Meantime, the courts largely nullified his dirty work. By June 1920, the raids were history. In the fall, the Democrats lost big as Republican Warren Harding ushered in “an era of normalcy.”

It’s hard to find any lingering trace of the “subversive” work the Palmer Raids were ostensibly intended to combat. Thousands were arrested when actual crimes were committed by a relative few. Certainly, none of the arrested Americans gave us a progressive income tax or a central bank or violations of free speech and due process. It was Woodrow Wilson and his friends who gave us all that, and much more mischief.

Let us remember the Palmer Raids and the administration that carried them out as black marks against American liberty, hopefully never to be repeated.