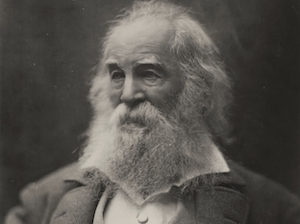 November 4, 1865 – When President Abraham Lincoln was assassinated on April 14, 1865; a war-weary nation was plunged into shock. The last great battles of the Civil War were still a recent memory, and the murder of the president seemed to be a bloody, pointless coda to four years of conflict and instability. There was a great outpouring of grief across the country, and poems and songs were written mourning the nation’s loss.

One American who grieved for the fallen president was the poet Walt Whitman. Whitman had lived in Washington for most of the war and was a great admirer of Lincoln, whom he felt embodied the American virtues of plain-spokenness, courage, and “horse-sense.” He often saw the president riding around town on horseback, and the two men sometimes exchanged cordial bows.

Lincoln’s death inspired Whitman to write one of his most memorable works – a simple, three-stanza poem of sorrow that bore little resemblance to his other, more experimental writings. “O Captain! My Captain!” was published in New York’s Saturday Press in November of 1865, and was met with immediate acclaim. The poem’s evocation of triumph overshadowed by despair spoke to readers throughout the shattered nation, and it was widely reprinted and published in anthologies. “O Captain! My Captain!” became the most popular poem Whitman would ever write, and helped secure for him a position as one of the greatest American poets of the 19th century.

O CAPTAIN! MY CAPTAIN!
O Captain! my Captain! our fearful trip is done,
The ship has weather’d every rack, the prize we sought is won,
The port is near, the bells I hear, the people all exulting,
While follow eyes the steady keel, the vessel grim and daring;
But O heart! heart! heart!
O the bleeding drops of red,
Where on the deck my Captain lies,
Fallen cold and dead.

O Captain! my Captain! rise up and hear the bells;
Rise up—for you the flag is flung—for you the bugle trills,
For you bouquets and ribbon’d wreaths—for you the shores a-crowding,
For you they call, the swaying mass, their eager faces turning;
Here Captain! dear father!
This arm beneath your head!
It is some dream that on the deck,
You’ve fallen cold and dead.

My Captain does not answer, his lips are pale and still,
My father does not feel my arm, he has no pulse nor will,
The ship is anchor’d safe and sound, its voyage closed and done,
From fearful trip, the victor ship comes in with object won;
Exult O shores, and ring O bells!
But I with mournful tread,
Walk the deck my Captain lies,
Fallen cold and dead.

~ Postlogue ~
Having spent nearly sixty years studying this horrific war, I am convinced that Lincoln was taken out by the international banking cartel, controlled by the Rothschild (Bauer) family. This was not the only time attempts, or successful attempts were committed against America’s leaders. Andrew Jackson spoke out against them, and there was an attempt on his life, much the same as we saw with James A. Garfield and John F. Kennedy.

Doubt my words if you will, but do your homework and you will begin to question what you have been told, and you will discover that the International Banking cartel is a powerful enemy, should they be crossed. ~ Jeffrey Bennett, Editor