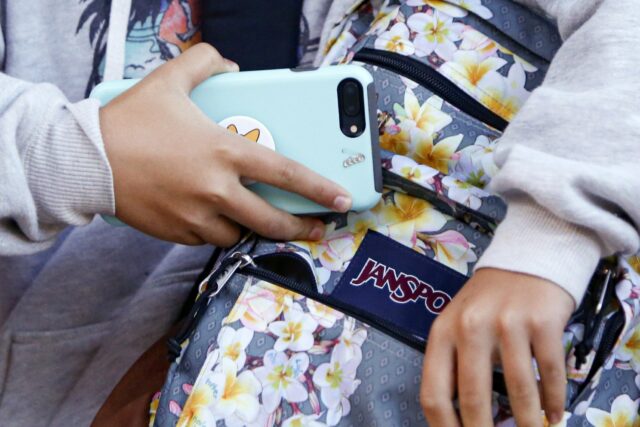 A student at Mountain Middle School, a public charter school in Durango, Colo, puts her phone away before entering the building for the school day on Wednesday, Oct. 30, 2019. [Chris Neal/Shooter Imaging]

Teachers at Mountain Middle School in Durango knew they had to do something. La Plata County had one of the highest teen suicide rates in Colorado and the school wanted to be a truly safe space.

One of the first things that came to mind — a cell phone ban. So, seven years ago, that’s what they did.

Shane Voss, who was the new head of school at the public charter school back then, cites 24-hour cyberbullying, loss of sleep, round-the-clock social pressure to respond to Snapchats, Instagram posts and texts, and constant comparing oneself to other students. Voss and other school staff say cell phones play an underestimated role in the current teen mental health crisis.

Eighth graders Grace and Henry don’t know what school is like with phones. Henry is on his phone about 10 minutes before he walks into Mountain Middle School and then it’s off.

He said for the first half hour of school his phone might be in the back of his mind, “but once class starts then it’s just ‘kinda out the window and I’m not really thinking about it. So it’s not a big distraction for me during school.”

When school’s out, he doesn’t really think about it either because he hasn’t seen in for the past six or seven hours. Grace doesn’t think about her phone at all during the day except towards the end of the day, “thinking about like, did my mom send me a text to say where I’m going after school and or something like that.”

The rules are simple. And kids are talking to each other.
There’s a warning the first time a phone is out of a student’s backpack. On the second infraction, the phone is confiscated and parents have to pick it up. The third time, a student must hand the phone into the office at the beginning of the school day and pick it up at the end, for a set period of time. 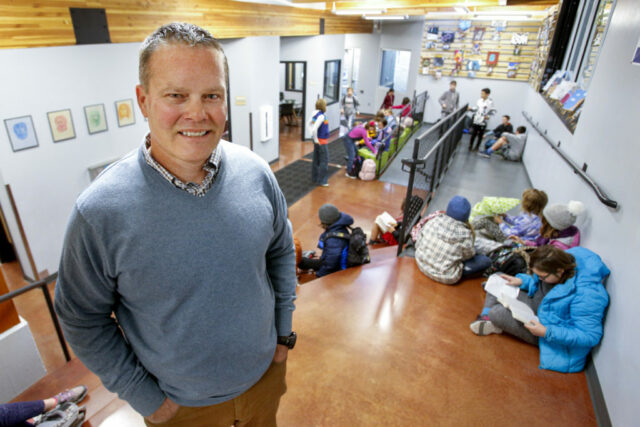 “What we’ve tried to do at our school is create a safe zone,” Voss said. “The eight hours of a school day when students don’t have to worry about that added extra pressure.”

He calls it a sanctuary.

“They can just be a kid for eight hours and not have to worry about all the madness of responding and playing that digital game with their friends.”

When the policy was first implemented seven years ago, kids would come into the school at 7:45 a.m., pull out their phones and look at Snapchat or Instagram as they waited for school to start at 8:00 a.m.

“It was kind of eerie that they were all sitting next to each other but not talking to each other,” recalls Voss. In 2016, teachers and administrators tweaked the rule to require that phones are in backpacks before students enter the building.

If parents have an emergency and need to reach their children, they can call the front office and every classroom has a phone. “But they [parents] should not be texting their student during the school day and distracting them during class,” Voss said.

You don’t spring a cell phone ban on parents.
Voss said parents needed to be educated about the impacts of the cell phone on the adolescent brain. Some studies point to a correlation between high social media use and anxiety and depression. The school invited parents throughout Durango to attend a screening of the documentary “Screenagers,” which explores the impact of screens on kids’ brains. A second event featured a showing of “Angst” which documents heightened levels of anxiety in today’s youth.

If you are in crisis, or are looking for mental health services for you or someone you know, call the Colorado Crisis Services hotline. Call 1-844-493-8255 or text “TALK” to 38255 to speak with a trained counselor or professional. Counselors are also available at walk-in locations or online to chat between 4 p.m. and 12 a.m.

Parents, however, can also be part of the problem. Cell phone behavior is learned, Voss said. So the community discussions emphasized the importance of not using the cell phone while driving or during family dinners or when talking with children. 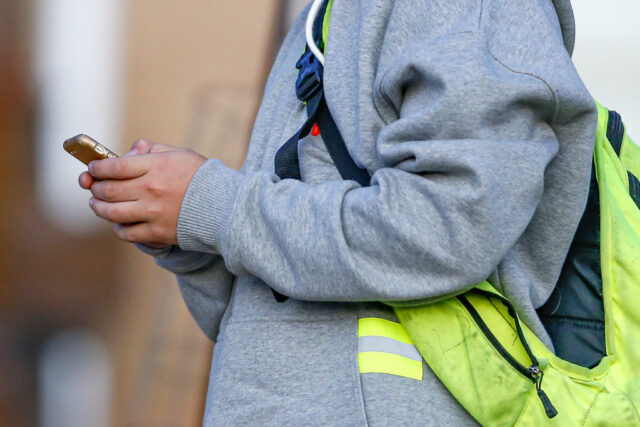 “Parents need to model appropriate usage,” he said. “We’re getting our kids ready for the world of work and you’re present, you’re focused, you’re not checked out and you’re not on social media and when you’re in a business meeting.”

Voss said when he walks into a school without a cell phone ban, the difference is palpable.

Students are walking around with their heads down, on their phones.

“It’s kind of like the zombie apocalypse and you have all these kids in the hallways not talking to each other. It’s just a very different vibe.”

Mountain Middle School’s structure and programming is adapted on the nationally-renowned High Tech High model with a heavy focus on project-based learning, integrating technology when appropriate into learning, and displaying and exhibiting students work to adults. Voss said that requires focus and collaboration.

The school tries to teach the skill of being “indistractible” focusing students on one skill, one concept, or one conversation at a time. It’s not an easy task when many students attempt to do homework, listen to music, text and keep an eye on Netflix releases at the same time. Voss credits the cell phone-free environment as a significant factor in the school’s upward trajectory. In the school’s first two years, it struggled academically. But for the past several years it has attained Colorado’s highest performance rating. 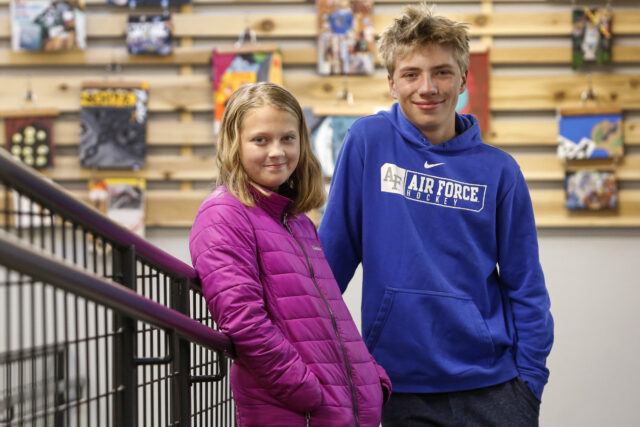 Some parents and teachers worry that the cell phone could be interfering with young people’s identity formation, a critical time of social development when young people grapple with who they are and how best to communicate with others. Voss shares that worry. He said teaching social skills is equally as important as academic skills, for example, the importance of eye contact in a conversation. Students are required to do public exhibitions about their learning.

“I do think the cell phone piece is a big part of why students don’t know how to communicate well face to face,” Voss said. He believes schools should be teaching students how to use technology appropriately and teach them that it can play a role in teen anxiety and depression.

Why doesn’t every school create cell-phone free environments?
Ninety-five percent of teens have access to a smartphone and many Colorado school officials say it’s impossible to monitor them. Voss counts off the excuses he’s heard for why schools can’t implement bans. One is that there may not have enough Chromebooks for each student and so teachers rely on phones for internet access. Voss believes that technology needs to be prioritized in the budget so classrooms don’t have to rely on phones. He also believes some administrators fear parent and student pushback. “It’s kind of like a digital umbilical cord for parents and students,” he said. 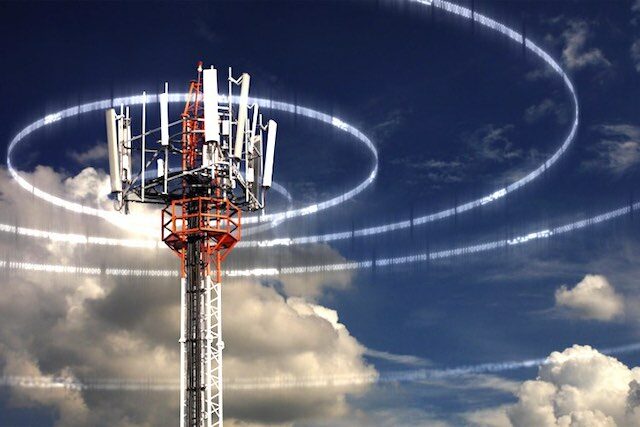 “I can’t tell you how many schools I visit and they say, ‘Man, I wish we could do that, but we don’t have have the courage to do that.’”

But Voss believes the current mental health crisis in youth means that schools need to think hard about what’s best for kids.

“Let’s remove all the excuses because we know this is what’s best for kids. We’re going to have fewer kids facing depression and anxiety. The mental health piece of this is huge and that can’t be ignored.”

Henry said kids do complain about the ban.
“Everybody said like, ‘Oh, I really, really wish I can be on my phone.’ But I think subconsciously everybody realized that it’s good for them, but like nobody really realizes it. Nobody thinks, ‘Wow, this is nice. I don’t have to worry about this for seven hours.’ And that’s one of the nice things is people may think it’s a burden or it’s like a punishment, but it’s really there to help you be the best person you can be.”

Most of the complaining is at the beginning of the year, he said – kids are coming off a summer gorge-fest.

They’ll soon be headed to high school, where there isn’t a cell phone ban. It’s another change Grace has thought about.

“I guess your phone is like more of a big deal in high school ‘cause it’s a lot more prominent of a way of communication,” she said.