A personal post – of sorts. WARNING: There is one word in the following text which in fact does violate the purposes of this web-site – however – I am not the perpetrator – the author of the words of a song is. ~ Ed. 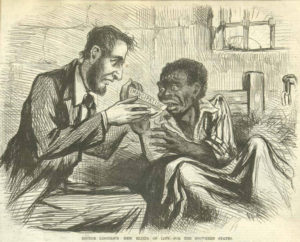 Few remember the 1968 Broadway play, ‘HAIR‘. A live performance originally performed at the Biltmore Theater, 261-5 West 47th St. in New York City. I did not see it in New York, but while on R&R in Tokyo in ’69 (from ‘nam) I stayed at a hotel that was also hosting the Chicago cast for performances in that city. Only one performance was held, due to the nudity on stage. The cast and play were subsequently banned from further performances due to pornography laws. I was privileged to spend several evenings in the bar and restaurant with that cast and made some interesting friends, many of who I would meet up with again when I was released from the Army after my 21 months “in country.”

The ONE song that I always remember – to this day over a half century later, was entitled, ‘Abie Baby‘ – and within – was the greatest verse ever in a play (later, a watered-down movie), “Yes, I’s finished on y’all farm land with yo’ boll weevils and all, and pluckin’ y’all’s chickens, fryin’ mother’s oats in grease. I’s free now, thanks to yo’, Massa Lincoln, emancipator of the slaves. Yeah, yeah, yeah, emanci-fuckin-pator of the slaves.“

Stinkin’ Lincoln didn’t free anyone my friends – in a manner of speaking – he ENSLAVED us ALL!

I’ll see you at Sundown…

A veteran of Viet Nam, student of history (both American and film), Jeffrey Bennett has broadcast for over 24 years years as host of various programs and has been considered the voice of reason on the alternative media – providing a unique and distinctive broadcast style, including topics such as health and wellness, news, financial well-being, political satire (with a twist), education and editorial commentary on current events through the teaching of history. In addition, he is the CEO of Kettle Moraine, Ltd.