… give children the chance to form opinions 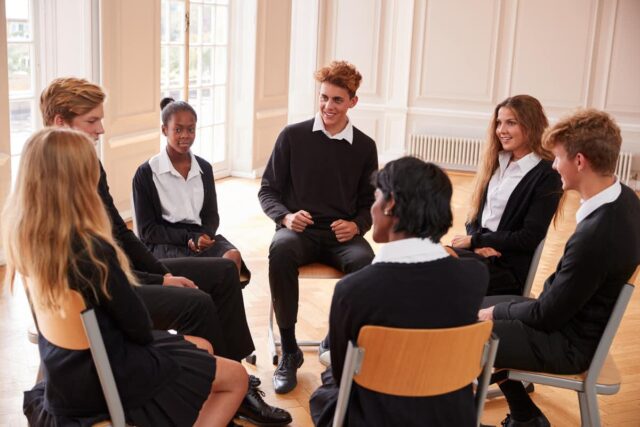 If political headlines globally are anything to go by, it seems democracy is at risk. Totalitarian views are on the rise. Far-right parties and leaders have gained voters in many countries. And decisions are being made by law courts or by technical experts from international economic organisations. And people, particularly young people, feel they do not have a say. So it’s not surprising then that governments are turning their attention to schools as a potential cure.

Promoting democracy has always been one of the tasks of schools within democratic systems. But this demand is now on the rise. Indeed, across the globe teachers in schools are expected to engage students as democratic citizens. It’s hoped such lessons about democracy and what it is to be a good citizen will help to combat growing support for totalitarian and radical views.

Wanted: democratic education
In my research, I have examined more than 370 academic articles about democratic education. My analysis shows there is much disagreement, even among academics, as to both what democracy means as well as how to educate children and young people into democratic values.

But even despite these disagreements, most researchers agree on something: when students discuss and evaluate viewpoints on topics such as as globalisation or evolution not only do they learn more about geography or science but they also discover that their voice matters.

Indeed, when topics such as patriotism or historical conflicts are presented as ideas to be debated rather than facts to be learnt, students have time to form opinions and democracy benefits.

Schools can also help to promote democracy when students, parents and teachers are involved in making decisions. At some schools in Brazil, for example, members of the school community democratically agree on school rules, curriculum and procedures. But limited time and space for controversy and participatory decisions in schools restricts this process – and this needs to change.

Teaching to the test
Part of the problem is that in recent decades, there has been an increasing insistence on standardised tests. Even four year olds in England now sit a test in the first ten weeks of school. Most teachers are against this. But as they want their students to do “well”, they end up teaching to the test. As a consequence, students learn there is a single correct answer for everything, including politics and democracy.

At the same time as a move towards standardised tests, policymakers worldwide have also pushed for the constant evaluations of schools themselves. Parents, teachers and students do not discuss school rules, curriculum and procedures that better benefit their community. Instead, they discuss how to respond to national and international standards decided upon elsewhere – often by experts from economic organisations.

And these standards are the same for everybody – top-down. Meaning that there is no space, time and possibilities for participatory decision making – mainly because there is a more immediate need to be accountable to institutions and their experts.

A democratic cure?
Education is not a universal solver. It cannot be seen as a cure all for society because it is part of society. But schools can also be good places to begin the fights to “save” democracies from going into crisis.

It’s clear then that if societies seriously want to promote democracy, the solution is not (only) to teach about democracy and about good citizenship. Governments and policymakers need to give schools the freedom, space and time needed for activities outside of tests, exams and evaluations, so children can see, experience and practice democracy for themselves.

Written for and published by the Conversation ~ October 2, 2019