…and why the New York Times Is Wrong 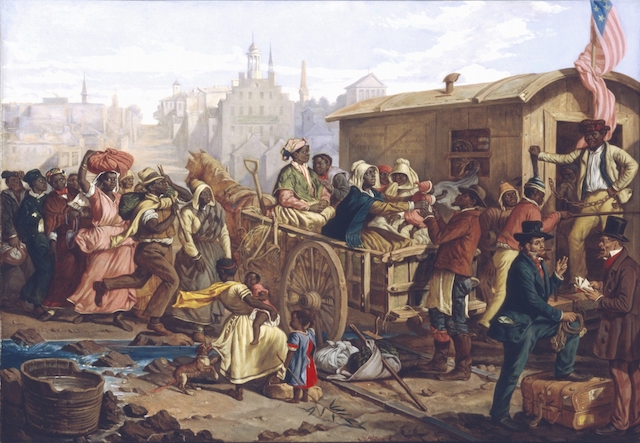 For those who want to fundamentally transform our nation, the first order of business is to thoroughly discredit our past.

For decades, progressives have claimed that our foundations are so cracked and broken by the original sin of slavery that reverence paid both to our Constitution and its Framers is undue, and while the left has long claimed that our Founders were hypocrites, The New York Times has gone a step further.

With its much-ballyhooed “1619 Project,” the Times is attempting to “reframe American history” by imagining 1619, not 1776, as our nation’s birth year. Why 1619? That’s the year the first African slaves landed in the British colonies of America.

That places our greatest national shame at the very beginning – and the very center – of our nation’s history.

According to the Times, America is so tainted by slavery and riven by racism that these should be regarded as its fundamental characteristics. Thus, the first slave ship’s landfall in Virginia should mark our nation’s true beginning.

To the Times, the dates and documents that typically mark our starting point do not deserve that honor since, in its telling, “Our founding ideals of liberty and equality were false when they were written.”

The Constitution, in this view, is fruit of a poisoned tree. The 1619 Project’s authors claim that the Constitution is a decidedly pro-slavery document, despite the fact that the words “slaves” or “slavery” are never used.

“In the texts in which they were making the case for freedom to the world, they did not want to explicitly enshrine their hypocrisy, so they sought to hide it,” writes Nikole Hannah-Jones of the 1619 Project.

Conservatives well understand that the Founders did not wholly embody the principles set forth in the declaration, but we deny that those ideals were false, weakly held, or mere rhetoric.

Moreover, we deny that the Constitution is shot through with our Founders’ sins. In fact, it represents their better angels, and that’s why it endures.

Our Founders’ own statements at the Constitutional Convention, speeches, and private correspondence thereafter paint a very different picture of their views on slavery and how it shaped the Constitution.

It wasn’t for the sake of the rest of the world that the Founders did not mention slavery therein, as Hannah-Jones claims. It was not a mere fig leaf.

The words were purposefully omitted in the hope that our Constitution would long outlive the horrors of slavery and the conviction that our founding document would not bear its scars.

The Founders were under no illusions that slavery was in any way consonant with the principles at the very foundation of our regime.

Moreover, they hoped that the harsh dissonance between principle and practice would be resolved quickly. Indeed, in laying down principles that could not be squared with slavery—and drafting a Constitution that did not guarantee its continuance, nor even countenance slavery’s existence – our most celebrated Founders hoped they had hastened its demise.

Indeed, decades later as Southern politicians, such as Sen. John Calhoun of South Carolina, attempted to defend slavery against mounting challenges, they found no support in our founding documents.

Calhoun was forced to mount a direct attack on the principle of equality the documents so clearly announced.

It was politicians such as Abraham Lincoln and abolitionists such as Frederick Douglass who relied on our founding for support.

In fact, Douglass even defended the founding documents against others on his side. In response to abolitionists who – like The New York Times today – claimed that the document was pro-slavery (and, hence, should be abandoned), Douglass argued that “upon its face it of itself conveys no such meaning, but a very opposite meaning.”

But, one need not rely on Douglass, Lincoln, or Calhoun’s interpretations of the founding for evidence of the Founders’ view of slavery.

While the left will continue to castigate the Founders as unabashed hypocrites and malign the Constitution as an instrument of America’s slaveholding elites, the Founders’ own statements at the Constitutional Convention and thereafter put the lie to this narrative:

“There is not a man living who wishes more sincerely than I do, to see a plan adopted for the abolition of [slavery].” – George Washington, Letter to Morris, 1786

“ … [E]very measure of prudence, therefore, ought to be assumed for the eventual total extirpation of slavery from the United States … . I have, through my whole life, held the practice of slavery in abhorrence … .” – John Adams, Letter to Evans, 1819

“Slavery is … an atrocious debasement of human nature.” – Benjamin Franklin, an Address to the Public from the Pennsylvania Society for Promoting the Abolition of Slavery, 1789

“And can the liberties of a nation be thought secure when we have removed their only firm basis, a conviction in the minds of the people that these liberties are of the gift of God? That they are not to be violated but with his wrath? Indeed, I tremble for my country when I reflect that God is just: that his justice cannot sleep [forever] … .” – Thomas Jefferson, Notes on the State of Virginia, 1781

“The laws of certain states … give an ownership in the service of negroes as personal property … . But being men, by the laws of God and nature, they were capable of acquiring liberty—and when the captor in war … thought fit to give them liberty, the gift was not only valid, but irrevocable.” – Alexander Hamilton, Philo Camillus No. 2, 1795

“We have seen the mere distinction of [color] made in the most enlightened period of time, a ground of the most oppressive dominion ever exercised by man over man.” – James Madison, Records of the Federal Convention, 1787

“Every master of slaves is born a petty tyrant. They bring the judgment of heaven on a Country. As nations [cannot] be rewarded or punished in the next world, they must be in this. By an inevitable chain of causes & effects providence punishes national sins, by national calamities.” – George Mason, James Madison’s Notes on the Federal Convention, 1787

“The benevolent Creator and Father of Men, having given to them all an equal Right to Life, Liberty and Property, no Sovereign Power on Earth can justly deprive them of either … . It is our Duty therefore, both as free Citizens and Christians, not only to regard with compassion the injustice done to those among us who are held as slaves, but endeavor, by lawful ways and means, to enable them to share equally with us in that civil and religious Liberty with which an indulgent Providence has blessed these States; and to which these, our Brethren are by nature, as much entitled as ourselves.” – Preamble of The New York Manumissions Society Charter, co-founded by John Jay and Alexander Hamilton, 1785

Written by John York and published by The Daily Signal ~ September 27, 2019

2 thoughts on “What Our Founders Really Thought of Slavery…”