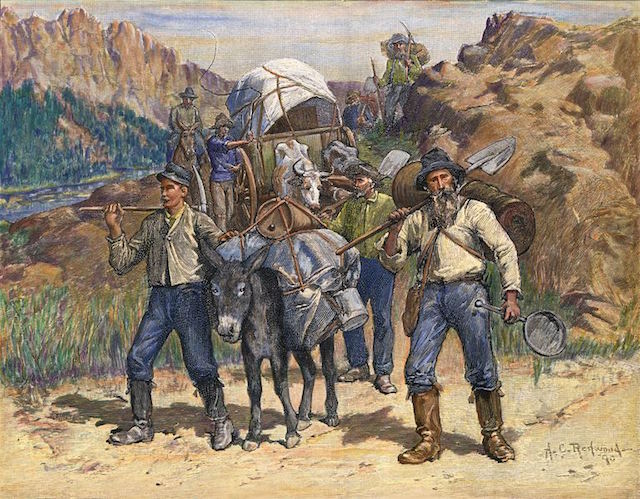 When the 50th anniversary of California Gold Rush approached there was great interest in locating any eyewitnesses to the event who might still be alive. Several individuals claimed to have been with James Marshall when he first found a few gold nuggets while building a sawmill for adventurer and land baron John Sutter.

Most of these accounts were greeted with skepticism, but it was generally agreed that an old man named Adam Wicks, who was living in Ventura, California, could reliably tell the story of how gold was first discovered in California on January 24, 1848.

The New York Times published an interview with Wicks on December 27, 1897, approximately a month before the 50th anniversary.

Wicks recalled arriving in San Francisco by ship in the summer of 1847, at the age of 21:

“I was charmed with the wild new country, and decided to stay, and I’ve never been out of the state from that time. Along in October 1847, I went with several young fellows up the Sacramento River to Sutter’s Fort, at what is now the City of Sacramento. There were about 25 white people at Sutter’s Fort, which was merely a stockade of timbers as a protection from assaults by Indians.

“Sutter was the richest American in central California at the time, but he had no money. It was all in land, timber, horses, and cattle. He was about 45 years old, and was full of schemes for making money by selling his timber to the United States government, which had just come into possession of California. That is why he was having Marshall build the sawmill up in Columale (later known as Coloma).

“I knew James Marshall, the discoverer of gold, very well. He was an ingenious, flighty sort of man, who claimed to be an expert millwright out from New Jersey.”

“In the latter part of January 1848, I was at work with a gang of vaqueros for Captain Sutter. I remember as clearly as if it were yesterday when I first heard of the gold discovery. It was on January 26, 1848, forty-eight hours after the event. We had driven a drove of cattle to a fertile grazing spot on the American River and were on our way back to Columale for more orders.

“A nephew, a lad of 15 years, of Mrs. Wimmer, the cook at the lumber camp, met us on the road. I gave him a lift on my horse, and as we jogged along the boy told me that Jim Marshall had found some pieces of what Marshall and Mrs. Wimmer thought were gold. The boy told this in the most matter-of-fact way, and I did not think of it again until I had put the horses in the corral and Marshall and I sat down for a smoke.”

Wicks asked Marshall about the rumored gold discovery. Marshall was at first quite annoyed that the boy had even mentioned it. But after asking Wicks to swear he could keep the secret, Marshall went inside his cabin, and returned with a candle and a tin matchbox. He lit the candle, opened the matchbox, and showed Wicks what he said were nuggets of gold.

“The largest nugget was the size of a hickory nut; the others were the size of black beans. All had been hammered, and were very bright from boiling and acid tests. Those were the evidences of gold.

“I have wondered a thousand times since how we took the finding of the gold so coolly. Why, it did not seem to us a big thing. It appeared only an easier way of making a living for a few of us. We had never heard of a stampede of gold-crazy men in those days. Besides, we were green backwoodsmen. None of us had ever seen natural gold before.”

The Workers at Sutter’s Mill Took It in Stride
Amazingly, the impact of the discovery had little effect on the daily life around Sutter’s holdings. As Wicks recalled, life went on as before:

“We went to bed at the usual hour that night, and so little excited were we about the discovery that neither of us lost a moment’s sleep over the stupendous wealth that lay all about us. We proposed to go out and hunt at odd times and on Sundays for gold nuggets. Two weeks or so later Mrs. Wimmer went to Sacramento. There she showed at Sutter’s Fort some nuggets she had found along the American River. Even Captain Sutter himself had not known of the finds of gold on his land until then.”

Gold Fever Soon Seized the Entire Nation
Mrs. Wimmer’s loose lips set in motion what would turn out to be a massive migration of people. Adam Wicks remembered that prospectors started appearing within months:

“The earliest rush to the mines was in April. There were 20 men, from San Francisco, in the party. Marshall was so mad at Mrs. Wimmer that he vowed he would never treat her decently again.

“At first it was thought the gold was only to be found within a radius of a few miles of the sawmill at Columale, but the newcomers spread out, and every day brought news of localities along the American River that were richer in gold than where we had been quietly working for a few weeks.

“The very maddest man of all was Captain Sutter when men began to come from San Francisco, San Jose, Monterey and Vallejo by the score to find gold. All of the captain’s workmen quit their jobs, his sawmill could not be run, his cattle went wandering away for lack of vaqueros, and his ranch was occupied by a horde of lawless gold-crazy men of all degrees of civilization. All the captain’s plans for a great business career were suddenly ruined.”

The “Gold Fever” soon spread to the east coast, and at the end of 1848, President James Knox Polk actually mentioned the discovery of gold in California in his annual address to Congress. The great California Gold Rush was on, and the following year would see many thousands of “49ers” arriving to search for gold.

Horace Greeley, the legendary editor of the New York Tribune dispatched journalist Bayard Taylor to report on the phenomenon. Arriving in San Francisco in the summer of 1849, Taylor saw a city growing at incredible speed, with buildings and tents appearing all over the hillsides. California, considered a remote outpost only a few years earlier, would never be the same.