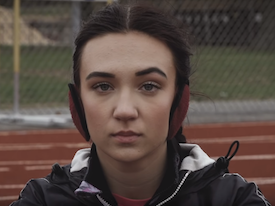 The Department of Education’s Office for Civil Rights is opening an investigation into whether female high school athletes were discriminated against when the state of Connecticut allowed males who identify as females to compete with them.

The three high school girls pursuing the complaint include Selina Soule, who earlier this year missed qualifying for the 55-meter dash in the New England regionals.

Two biological boys who identify as female were allowed to compete in Connecticut’s girls indoor track championship. These transgender females took first and second place in the event.

Had the transgender athletes not been allowed to compete with the girls, Soule would have qualified for the regionals, as The Daily Signal’s Kelsey Bolar documented in a May video report.

According to the letter sent by the Office for Civil Rights about its decision to take up the case, it is examining the Connecticut Interscholastic Athletic Conference’s “Transgender Participation Policy” for possible Title IX violations in discriminating against girls.

The state policy allows athletes to participate in boys or girls sports according to their gender identity, no matter their biological sex.

Title IX is a federal law created to protect equal education opportunities for women and girls, including in athletics. Schools may lose federal funds if they don’t comply.

The three girls’ complaint alleges that the Glastonbury Board of Education “denied equal athletic benefits and opportunities” to girls because of the transgender policy and its failure to request that the state conference change the policy.

Additionally, federal officials are investigating the Connecticut Interscholastic Athletic Conference and the Glastonbury school district for alleged retaliation against particular parents and their daughters for complaining about the transgender policy.

With the help of Alliance Defending Freedom, a nonprofit Christian legal aid organization, the parents of Soule and the two other unnamed girls filed a federal complaint June 18 on behalf of their daughters with the Department of Education.

Christiana Holcomb, legal counsel with the nonprofit, told The Daily Signal in June that it hopes “to restore a level playing field for Selina.”

“Girls like Selina should never be forced to be spectators in their own sports, but, unfortunately, that is exactly what is taking place when you allow biological males to compete in sports that have been set aside and specifically designed for women like Selina,” Holcomb said.

“Title IX was designed to ensure that girls have a fair shake at athletics, and are not denied the opportunity to participate at the highest levels of competition.”

Written by Carmel Kookogey and published by The Daily Signal ~ August 9, 2019