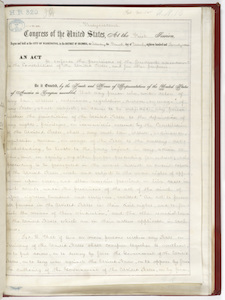 For several years now, certain groups and websites like Worldnewsstand have advocated an argument that the “federal” government was created as a municipal corporation via an act of February 21, 1871. The truth is otherwise.

There is a history regarding the formation of Washington, D.C. The Constitution specifically provides for the formation of a district, 10 miles square, to be the seat of the federal government; see Art. 1, § 8, cl. 17. When the Constitution was ratified, the defacto seat of that government was in Philadelphia. The Residence Act of 1790 (1 Stat. 130, July 16, 1790), started the process of establishing the District of Columbia; in the interim, the government continued to meet in Philadelphia. On December 19, 1791, Maryland adopted “An Act concerning the territory of Columbia, and the City of Washington,” which ceded lands and jurisdiction for the Maryland part of the District.

President Washington played a critical role in the selection of the actual site of the District, as well as laying out the plans for the city. Finally, on February 27, 1801, 2 Stat. 103, Congress adopted an act concerning the District, and created two counties, Washington County on the Maryland side, and Alexandria County on the Virginia side. See amendments, 2 Stat. 115, and 2 Stat. 193. On May 1, 1802, the then existing Board of Commissioners for the District was abolished, replaced with a superintendent under the control of the President; see 2 Stat. 175. On May 3, 1802, Congress adopted an act to incorporate the city of Washington, in the District; see 2 Stat. 195, and amendments at 2 Stat. 254 and 422. For some of the other acts regarding the District, see 3 Stat. 691, 4 Stat. 294, and 4 Stat. 517.

“June 20, 1874, an act was passed entitled ‘An Act for the government of the District of Columbia, and for Other Purposes.’ 18 Stat. 116, c. 337. By this act, the government established by the act of 1871 was abolished and the President, by and with the advice and consent of the Senate, was authorized to appoint a Commission, consisting of three persons, to exercise the power and authority vested in the governor and the board of public works, except as afterwards limited by the act.”

Those who assert some wild theory about Washington, D.C. are utterly wrong. They have invented a “different version” of history without bothering to check out the facts.