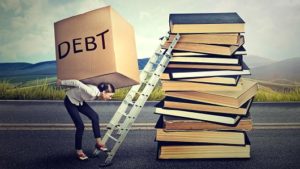 How badly are we in hock to college? According to Bloomberg News, $1.46 trillion. That’s 1.46 thousand billions, or 1.46 million millions. And in the last quarter of 2018, seriously late or unpaid student debt was over $166 billion.

Those are colossally bad numbers, and no one seems to know how to make them any better. Somehow, sitting in college classrooms for five years and getting a degree in Gender Studies doesn’t translate into a viable income. College grads don’t earn enough money to pay off their debt; and their parents are borrowing to pay their kids’ expenses. Sort of a gift that keeps on giving.

The cost of what we laughingly call “higher education” has doubled in the last 20 years.

So what are we getting for all this money? And don’t forget the 13 years of public schooling that precedes your entry into college. No one really knows how much America spends on that. No one really wants to know.

Recently the Woodrow Wilson Foundation administered a basic citizenship test to some 40,000 people nationwide, with rather discouraging results [link]. Out of all 50 states, only Vermont managed to have a passing grade: which is to say, 53% of Vermonters passed the test. Not exactly burning up the track. A score of 60 out of 100 was passing. When I was in school, 60 was a big red F. I dare them to give the same test to Christian homeschooled kids, and compare the results.

Anyway, coast to coast, only one out of four people passed the test—in spite of all the years they’d spent in public school and college. Not a great advertisement for the costliest system of education ever devised by human beings.

But Western Europe isn’t doing that much better.
In a frantic effort to make herself relevant to current politics, Hillary Clinton has been extolling European students for cutting class to “protest” their governments’ failures to stop climate from changing. “Something extraordinary” is happening here, crowed Clinton: “Teen girls are leading a movement to stop Climate Change”. Oh, boy. Let’s be led by teenaged girls.

The bilge which kids are, uh, “learning” in their schools in Sweden, Belgium, Germany, and Scotland is every bit as worthless as what we’re selling in America. And they get to cut their boring classes and be interviewed on television—just as if they had something important to say. One quote will suffice.

“If you get a detention [for cutting class], that’s nothing to how we will suffer in future if nothing is done!”

Has anybody thought of how we’ll suffer if “something” is done? The powers that governments claim they’ll need to acquire, to stave off Climate Change, are nothing short of mind-blowingly totalitarian. It’ll make Mao Tse-tung and his Great Leap Foreward look like a small-town mayor in New Jersey fiddling with the snow-removal budget.

If these teen girls were learning any more history and civics than American kids are learning in their own benighted public schools, they would be—to put it mildly—very afraid of what their nations’ governments want to do to them. Has that whole unhappy 20th century been erased from human memory? Does no one under 70 remember what tyrants do, when they’re trying to create Utopia? Has everybody got amnesia?

We are paying more than just our money for what we think is education. Deranged politicians who in normal times would be laughed off the stage for anything remotely resembling their “Green New Deal” now expect to win the next election.

If they ever get in power, and do the things they say they want to do—well, no one will be laughing at them anymore.