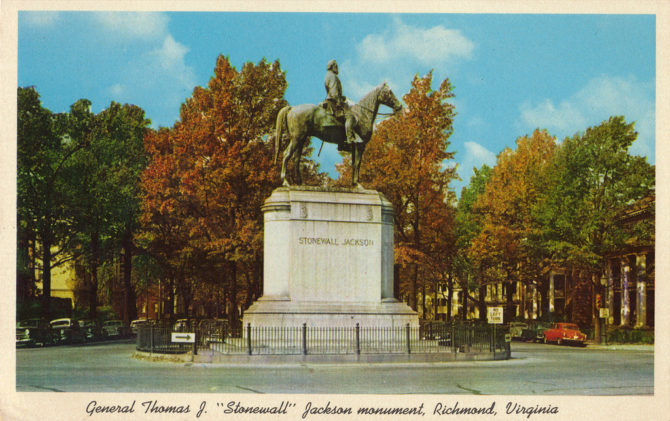 In 1875, Rev. Moses Drury Hoge stood before 40,000 people in Richmond, Virginia, at the foot of the newly dedicated statue of Thomas J. “Stonewall” Jackson, and delivered what one historian called the “noblest oration of his later life.”

He believed that in the future, the path to that statue would be “trodden” by the feet of travelers from “the banks of the Hudson, the Mississippi, [and] the Sacramento…from the Tiber, the Rhine, [and] the Danube.” They would be accompanied by “Honor” and “Freedom,” the twin principles by which Jackson lived and died and which these pilgrims would seek to celebrate. Jackson represented the best of American society and his memorial reminded not just America, but the world, of patriotism, heroism, and duty, the highest traits of Western Civilization and of all dead heroes.

But though Hoge was willing to put down the sword and join in common cause with his former foes from the North, he urged the thousands of people in Richmond that day to not “shut our eyes to the fact that this consolidated empire of states is not the Union established by our fathers. No intelligent European student of American institutions is deceived by any such assumption. We gain nothing by deceiving ourselves.”

To Hoge, the bronze depiction of Jackson represented more than just a memorial for dead heroes and patriots. It was a symbol of American principles, bequeathed by their patrimony and defended by the blood of thousands of Southerners sleeping in graves across the United States. “And now standing before this statue,” he thundered, “and, as in the living presence of the man it represents, cordially endorsing, as I do, the principles of the political school in which he was trained and in defence of which he died…I speak not for myself, but for the South, when I say it is our interest, our duty and determination, to maintain the Union, and to make every possible contribution to its prosperity and glory, if all the states which compose it will unite in making it such a Union as our fathers framed, and in enthroning above it, not a Caesar, but the Constitution in its old supremacy.” [emphasis added]

Jackson was defiance. Jackson was America. But Hoge insisted that America could only be maintained if the States stood “on the same level, with such a jealous regard for each other’s rights that when the interests or honor of one is assailed, all the rest, feeling the wound, even as the body feels the pain inflicted on one of its members, will kindle with just resentment at the outrage, because an injury done to a part is not only a wrong, but an indignity offered to the whole.”

Hoge then boldly added that “if that cannot be, then I trust the day will never dawn when the Southern people will add degradation to defeat, and hypocrisy to subjugation, by professing a love for the Union which denies to one of their states a single right accorded to Massachusetts or New York—to such a Union we will never be heartily loyal while that bronze hand grasps its sword—while yonder river chants the requiem of the sixteen thousand Confederate dead who, with Stuart among them, sleep on the hills of Hollywood.”

Southern symbols represent Hoge’s spirit and the spirit that animated countless patriots from Runnymede to Appomattox. The progressive Left understands this which is why they need to demonize and destroy these symbols–not of “white supremacy and oppression”–but of defiance to their political, economic, and social agenda. The America the progressive Left loves is not the real America; it’s the America that exists within the confines of their own skull, a Utopian dream that will never come to fruition, but one that requires the obliteration of traditional Western Civilization.

The “basket of deplorables” must be marginalized, de-platformed, silenced, and politically eliminated.

I would like to propose that Confederate memorials should neither be retained nor removed: They should be destroyed, and their broken pieces left in situ.

On a scheduled day, a city government or university administration would invite citizens to approach a Confederate memorial, take up a cudgel, and swing away. The ruination of the memorial would be a group effort, a way for an entire community to convert a symbol of racism and white supremacy into a symbol of resistance against oppression.

Historians could put up a plaque next to the fragments, explaining the memorial’s history, from its dedication day to the moment of its obliteration. A series of photographs or a YouTube video could record the process of destruction. These textual explanations may be unnecessary, however. Ruins tend to convey their messages eloquently in and of themselves. In this case, the ruins of Confederate memorials in cities across the nation would suggest that while white supremacists have often made claims to power in American history, those who oppose them can, and will, fight back.

People like Professor Nelson seem to be the majority in American society, and as a result, the assault on Confederate symbols will continue for the foreseeable future. This process began in the early 1990s but has only recently embodied the revolutionary zeal of the Jacobin Reign of Terror in republican France. More statues will come down. The toppling of Silent Sam and the removal of symbols, images, and simply the names of Davis, Lee, Jackson and others from public spaces will be, unfortunately, the opening salvo in a much longer cultural war that at its heart will define the American identity for future generations.

Americans must make a choice. Do we want to support the cultural, political, and economic lineage of Washington, Jefferson, Henry, Madison, Monroe, Lee, Davis, and Jackson, the heritage of the Magna Charta and the Jeffersonian spirit of self-determination and federalism, the richness of Southern music, literature, and art, or the Utopian innovations and comprehensive monolithic centralization of Professor Nelson?

The Southern tradition and the Confederate symbols that represent it are like a rose bush. Every tradition has it thorns, but the sweet scent and beauty of its flowers more than outweigh the dangers from its tangled vines. Do we hack down the bush or admire, nurture, and cultivate the roses? As Hoge pointed out and as Europeans understood both during and after the War, the Southern tradition embodied in the efforts of the heroes and patriots of 1776 and 1861, are the American roses, the American contribution to Western Civilization. 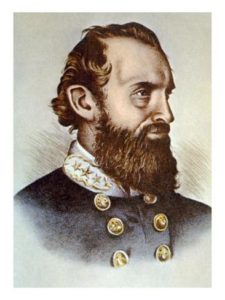 Our purpose at the Abbeville Institute is to explore this tradition, to critically examine what that tradition can teach America today. Political decentralization cannot feasibly work without a viable and vibrant cultural tradition to undergird its existence. No one will go to the mat for taxes. Both the founding generation who seceded from the British Empire and the Southerners who went to war in 1861 did so to protect the “ancient constitutions” of their ancestors and to defend hearth, home and culture, the traditions–myths in the correct definition of the term–that had been handed down through generations of dedicated, independent, republican patriots.

That is what is being destroyed by the progressive Left and why we exist. If you enjoy our conferences, website, and podcast, please consider a tax deductible donation to our cause. Tens of thousands of people attended Confederate monument dedications; hundreds of thousands of men bled and died fighting for the principles of ’76 and ’61. We do them no honor by shirking our responsibility to the present and the future. The barbarians have already broken through the gate. Symbols may be destroyed, but as long as the tradition itself continues to exist, the barbarians cannot win.

Please support our mission and stand in the breach with us.

Written by Brion McClanahan for The Abbeville Institute ~ December 21, 2018