“There are influences that never sleep.” 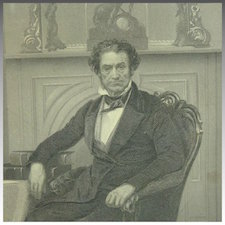 BOSTON, Mass., November 26, 1850 – Rufus Choate, former Senator now returned to private life in the practice of the law that has made him a national figure, spoke tonight with all the eloquence for which he is noted in favor of the Compromise efforts being led in the Congress by the southern Senator Henry Clay, of Kentucky.

Before an audience that packed Faneuil Hall, Mr. Choate argued that however meritorious the effort to force the South to free its slaves may be, the cause is not sufficient to invite a civil war.

He warned that the public should beware of attempts to mold public opinion to such an extreme action that “this Union may melt as frostwork in the sun.”

It is impossible at this point to assay the effect that the speech will have, but it is noteworthy that at this date in New England, Mr. Choate certainly speaks for a majority opinion that – in its confusion – favors abolition of slavery as a moral principal but is utterly I opposed to the attempts of the Abolitionists to carry the issue to one of war I itself.

I know very well that to sound a false alarm is a shallow and contemptible thing. But I know, also, that too much precaution is safer than too little, and I believe that less than the utmost is too little now. Better, it is said, to be ridiculed for too much care than to be ruined by too confident a security. I have, then, a profound conviction that the Union is in danger. I will tell you where I think the danger lies.

It is, that while the people sleep, politicians and philanthropists of the legislative hall, the stump, and the press, will talk and write us out of our Union. Yes, while you sleep, while the merchant is loading his ships, and the farmer is gathering his harvests, and the music of the hammer and shuttle wake around, and we are all steeped in the enjoyment of that vast and various good which a common government places within our reach. There are influences that never sleep, and which are creating and diffusing a public opinion in whose hot and poisoned breath, before we yet perceive our evil plight, this Union may melt as frostwork in the sun.

Do we sufficiently appreciate how omnipotent is opinion in the matter of all government? Do we consider especially in how true a sense it is the creator, must be the upholder, and may be the destroyer of our united government? …

And now, charged with the trust of holding together such a nation as this, what have we seen? What do we see today? Exactly this. It has been for many months-years, I may say, but assuredly for along season – the peculiar infelicity, say, rather, terrible misfortune of this country, that the attention of the people has been fixed, without the respite of a moment, exclusively on one of those subjects – the only one on which we disagree precisely according to geographical lines. And not so only, but this subject has been one-unlike tariff, or internal improvements, or the disbursement of the public money, on which the dispute cannot be maintained for an hour without heat of blood, mutual loss of respect, alienation of regard – menacing to end in hate and cruel as the grave.

I call this only a terrible misfortune. I blame here and now no man and no policy for it. Circumstances have forced it upon us all; and down to the hour that the series of compromise measures was completed and presented to the country, or certainly to Congress, I will not here and now say that it was the fault of one man, or one region of country, or one party more than another.

They tell us that slavery is so wicked a thing that they must pursue it, by agitation, to its home in the states, and that if there is an implied engagement to abstain from doing so, it is an engagement to neglect an opportunity of doing good, and void in the forum of conscience. But was it ever heard of that one may not formally bind himself to abstain from what he thinks a particular opportunity of doing good? A contract in general restraint of philanthropy or any other useful calling is void; but a contract to abstain from a specific sphere of exertion is not void, and may be wise and right.

. . . To win the opportunity of achieving the mighty good summed up in the pregnant language of the preamble to the Constitution, such good as man has not on this earth been many times permitted to do or dream of, we might well surrender the privilege of reviling the masters of slaves, with whom we must “either live or bear no life.”

Fellow citizens, the first of men are the builders of empires. …Let the grandeur of such duties, let the splendor of such rewards, suffice us. Let them reconcile and constrain us to turn from that equivocal philanthropy which violates contracts, which tramples on law, which confounds the whole subordination of virtues, which counts it a light thing that a nation is rent asunder, and the swords of brothers sheathed in the bosoms of brothers, if thus the chains of one slave may be violently and prematurely broken.