“Let us look to our country and our cause, elevate ourselves to the dignity of pure and disinterested patriots.” 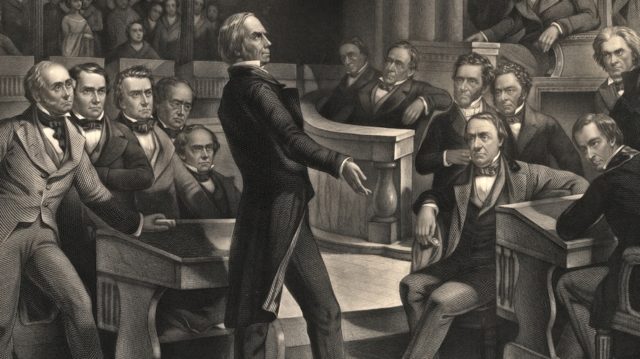 Senator Henry Clay speaking about the Compromise of 1850

WASHINGTON, D. C., July 22, 1850 – Henry Clay, senator from Kentucky, has appealed to the Congress, and over its head to the public, to adopt compromises on the slavery issue in constitutional form which, he conceded, will not wholly please anyone but promise to save the Union.

His speech was made in connection with the introduction of a Senate Resolution worked out in a committee of which he was chairman. But while the resolution bears the imprimatur of a committee, the whole argument is more precisely the work of this western Senator who already has won the unofficial title of “The Great Compromiser.”

Rather than apologizing for such a stand, Senator Clay reiterated today that compromise must be “the nature of the government and its operations” in all spheres of major debate; that concessions mutually made – which do not violate the basic tenets of government – are honorable gestures.

It has been objected against this measure that it is a compromise. It has been said that it is a compromise of principle, or of a principle. Mr. President, what is a compromise? It is a work of mutual concession – an agreement in which there are reciprocal stipulations – a work in which, for the sake of peace and concord, one party abates his extreme demands in consideration of an abatement of extreme demands by the other party: it is a measure of mutual concession – a measure of mutual sacrifice. Undoubtedly, Mr. President, in all such measures of compromise, one party would be very glad to get what he wants, and reject what he does not desire but which the other party wants. But when he comes to reflect that, from the nature of the government and its operations, and from those with whom he is dealing, it is necessary upon his part, in order to secure what he wants, to grant something to the other side, he should be reconciled to the concession which he has made in consequence of the concession which he is to receive, if there is no great principle involved, such as a violation of the Constitution of the United States. I admit that such a compromise as that ought never to be sanctioned or adopted. But I now call upon any senator in his place to point out from the beginning to the end, from California to New Mexico, a solitary provision in this bill which is violative of the Constitution of the United States.

The responsibility of this great measure passes from the hands of the committee, and from my hands. They know, and I know, that it is an awful and tremendous responsibility. I hope that you will meet it with a just conception and a true appreciation of its magnitude, and the magnitude of the consequences that may ensue from your decision one way or the other. The alternatives, I fear, which the measure presents, are concord and increased discord. . . I believe from the bottom of my soul that the measure is the reunion of this Union. I believe it is the dove of peace, which, taking its aerial flight from the dome of the Capitol, carries the glad tidings of assured peace and restored harmony to all the remotest extremities of this distracted land. I believe that it will be attended with all these beneficent effects. And now let us discard all resentment, all passions, all petty jealousies, all personal desires, all love of place, all hankerings after the gilded crumbs which fall from the table of power. Let us forget popular fears, from whatever quarter they may spring. Let us go to the limpid fountain of unadulterated patriotism, and, performing a solemn lustration, return divested of all selfish, sinister, and sordid impurities, and think alone of our God, our country, our consciences, and our glorious Union – that Union without which we shall be torn into hostile fragments, and sooner or later become the victims of military despotism or foreign domination. …

Let us look to our country and our cause, elevate ourselves to the dignity of pure and disinterested patriots, and save our country from all impending dangers. What if, in the march of this nation to greatness and power, we should be buried beneath the wheels that propel it onward! …

I call upon all the South. Sir, we have had hard words, bitter words, bitter thoughts, unpleasant feelings toward each other in the progress of this great measure. Let us forget them. Let us sacrifice these feelings. Let us go to the altar of our country and swear, as the oath was taken of old, that we will stand by her; that we will support her; that we will uphold her Constitution; that we will preserve her union; and that we will pass this great, comprehensive, and healing system of measures, which will hush all the jarring elements and bring peace and tranquillity to our homes.

Let me, Mr. President, in conclusion, say that the most disastrous consequences would occur, in my opinion, were we to go home, doing nothing to satisfy and tranquilize the country upon these great questions. What will be the judgment of mankind, what the judgment of that portion of mankind who are looking upon the progress of this scheme of self-government as being that which holds the highest hopes and expectations of … the condition of mankind – what will their judgment be? Will not all the monarchs of the Old World pronounce our glorious republic a disgraceful failure? Will you go home and leave all in disorder and confusion – all unsettled-all open? The contentions and agitations of the past will be increased and augmented by the agitations resulting from our neglect to decide them.

Sir, we shall stand condemned by all human judgment below, and of that above it is not for me to speak. We shall stand condemned in our own consciences, by our own constituents, and by our own country. The measure may be defeated. I have been aware that its passage for many days was not absolutely certain. …But, if defeated, it will be a triumph of ultraism and impracticability-a triumph of a most extraordinary conjunction of extremes; a victory won by abolitionism; a victory achieved by freesoilism; a victory of discord and agitation over peace and tranquillity; and I pray to Almighty God that it may not, in consequence of the inauspicious result, lead to the most unhappy and disastrous consequences to our beloved country.