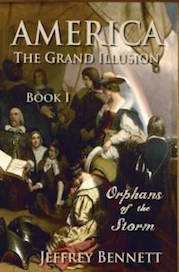 During the process of compiling and editing the first volume of AMERICA: The Grand Illusion ~ Book I: Orphans of the Storm, I had occasion to work with my twelve year old granddaughter, Taylor (whose name fittingly works its way into this tale) on a history project for school, dealing with the War Between the States (which we have covered extensively on this site, but will eventually move into a category of its own). Needless to say, her teacher has been compromised in her education, and is subsequently passing her ignorance of American history onto the next generation of ill-informed children.

I searched our families’ boxes of historical archives to gather information on an ancestor, who had fought in that un-civil action, and found a family genealogy, which had been compiled by my great-grandparents in 1926, and later updated in 1959 by a family cousin. Whether it has been updated since remains to be seen, but that, which I am about to share with you has led to great discoveries on the internet about the subject matter of this chapter. For the purposes of brevity however, I will share with you directly from the family records, which are not unlike hundreds of thousands of similar ancestral stories, which can be told of this grand experiment we call, ‘America.’

Just as those who came through Ellis Island many years later, the spellings of one’s name was altered for many reasons and by many sources, including both the legal system and the media (then known as newspapers or broadsides). David’s story is no different.

The following was compiled by the author’s Great Grandparents, Maude Van Hise Gardiner and Harry Martin Gardiner in 1926. You will note the variance of spellings of the family name. – Jeffrey Bennett, Publisher and Author

In the English parish register of Overstowey in Somerset County is this entry, “David Selleck the sonn of Robert Selleck was baptized the 27 February 1613.” (Dr. John T. C. Sellick & Darlene Kern)

(The date given is that under the old calendar. On our modern calendar, the date would be 27 February 1614.) David was a very rare name in Somerset at that time and of two David’s found to date this one is believed to be the ancestor of most of the Sellecks in America.

According to tradition the Sellack family name came from Wales. A village in Herefordshire, England, designated by a certain poet, “beautiful Sellack-on-the-Wye,” possibly was the home of David Sellack – an early settler of Boston, Massachusetts, is our American ancestor. His name is listed with eighty-five persons who came from Weymouth, England, in ship Elizabeth Bonadventure, John Graves, master, in what is know as the “second emigration.” They landed at Dorchester, Massachusetts in July 1633, after a voyage of twelve weeks including a stay of three weeks in the Azores or Western Islands, and settled in Dorchester, now included in greater Boston.

The name “David Sellack” appears on the membership roll of the first church built in Dorchester built in 1640. This church was formed in England. David Sellack returned to England in 1653 to settle the estate of Nicholas Sellack of Clatworthy or Murdon, near Overstowey. A John Sellack witnessed a Will there in 1620. David Sellack II married (1637) Susan Kibbe, daughter of Henry and Rachel (Taylor) Kibbe, of Dorchester, Massachusetts, where the first of their six children – David – was born in 1638. The other children were born in Boston, in which place the family owned land on State Street purchased in 1641, having sold their Dorchester property in that year. The Memorial History of Boston furnishes a complete list of the various properties owned by David Sellack, the latest date of which was listed as 1647. One record without date reads, “David Sellack sold to John Leverett – (The highway, which at this point extends north and west and was early called Green Lane, etc.).”

An interesting item from old land records reads, “July 31, 1643, James Oliver and Mr. Edwd. Tynge may straighten their street poles from David Sellacke his corner poste unto the said ‘Tynge’s dial poste. Oliver James, House and yd. Tynge S. Val. Hill n. David Sellack w. the St. s.” This refers to a lot on State Street between Long Wharf and the old State House, which, as the writer can judge, was lot now No. 70 or No. 110 as Edwin Sellack says below State Street. John Sellack was born in this house in the year 1643.

In 1917 Mr. Edwin Sellack of Chicago, Ill., wrote in his “Sellack Genealogy,” with reference of David, the settler, he said, “While his business was connected with soap, it is generally known in Boston and Dorchester that he gave more attention to other matters than boiling soap. Was interested more or less in coast trading, and, in fact, was an all-around speculator, ready for any kind of trade, was quite a prominent man, quite a leader, and far above the general run of the settlers.”

His home lot was as near as can be determined, about where 110 State Street is now. In those days it was called Kings Street. It is not uninteresting to know that it was located within a stones throw of the old State House, built in 1713, the site of the Boston Massacre and of Fanueil Hall, “The Cradle of Liberty,” where was shed the first blood of the Revolution. A reference to Kings Street is found in a letter written by Mr. Bennett (no relation) to friends in England. He said of Boston streets and houses of this time: “There are a great many good houses and several fine streets little inferior to some of our best in London, the prime of which is Kings Street.” This is the one where the English troops landed at the beginning of the Revolutionary War. The Sellack family lived near the end of this street “close by” the Long Wharf. David, “the settler” apparently was much interested in education for the Sellack Genealogy quoted earlier says: “It ought to be a source of pleasure to any descendant of David Sellack to know that his forebear was one of the founders of the present system of our public schools.” 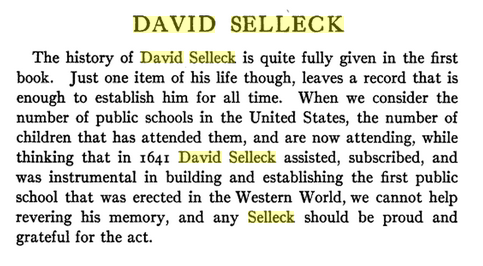 A tablet erected in Boston in 1909 attests this fact:

David Sellack’s name is one of the list of seventy-five signers of the foregoing petition (1639). He signed as David Sellack II.

From Shurtleff’s Description of Boston, page 682
“The chief Merchantile business of the town was transacted near this dock, (Bendall’s, later Town Dock) although the small trading and huckster’s shops were generally in the “highway” and scattered throughout the streets. The Cove lots were granted granted to the principal en of the town, and the following persons had their Meersteads bordering upon it, in the following order, commencing at the North: Thomas Clarke, Thomas Joy, Isaac Cullinore, Christopher Stanley, Bartholomew Passmore, John Gallop, Matthew Chaffin, Sampson Shore, John Hill, George Foxcroft, Edward Bendall, Valentine Hill, William Davis, Isaac Grosse, David Sellack, James Oliver and Edward Tyng.”