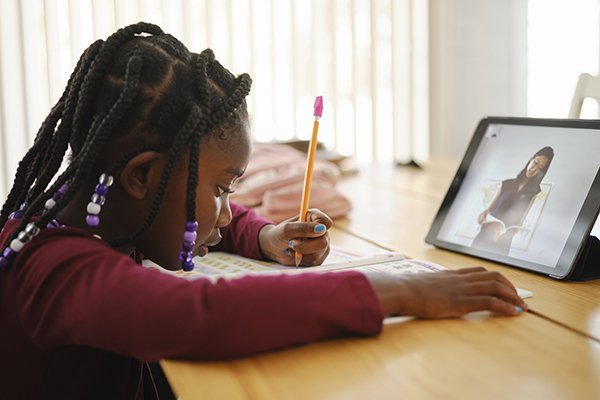 Personalizing learning to kids’ unique academic needs and personal interests is a tough nut to crack, and that is especially the case within the confines of a Zoom square. That is one of the big takeaways from a recent national survey by the EdWeek Research Center.

Personalized learning, accelerated by advances in technology and new teaching approaches, has been gaining steam – and attracting criticism – for years. Just a year ago, nearly three-quarters of teachers had a favorable or neutral take on the strategy, according to EdWeek Research Center data, while critics continued to hammer the approach for overusing technology.

Schools are now grappling with a chaotic season of figuring out how to do remote, hybrid, and socially distanced instruction; planning for looming budget cuts; struggling to work through sputtering home internet connections or no connections at all; and addressing the growing social and emotional needs of students.

Bottom line: Making sure lessons are tailored to individual students’ needs might be getting pushed to the back burner, out of necessity.

Educators report doing the best they can, under very difficult circumstances.

“We know that one of the most effective means for being a quality educator is that we can build relationships with students,” said Jeff Wright, the superintendent of Michigan’s Pewamo-Westphalia district, which is using a hybrid model of instruction and prides itself on close connections between educators and students. “Students need us far more right now than probably any time in our history. To do that relationship piece with a mask, while quarantining and social distancing, is not what we want.”

Here are four key observations based on the results of the nationally representative EdWeek Research Center survey – which included 370 teachers, 169 principals, and 251 school district leaders – and follow-up interviews with educators:

1 . Educators Feel Less Effective
More than half of educators – 53 percent – said that they feel teachers are much less effective, or at least somewhat less effective, when it comes to gauging students’ individual strengths and weaknesses, and personal interests, than they were before COVID-19 disrupted schools. 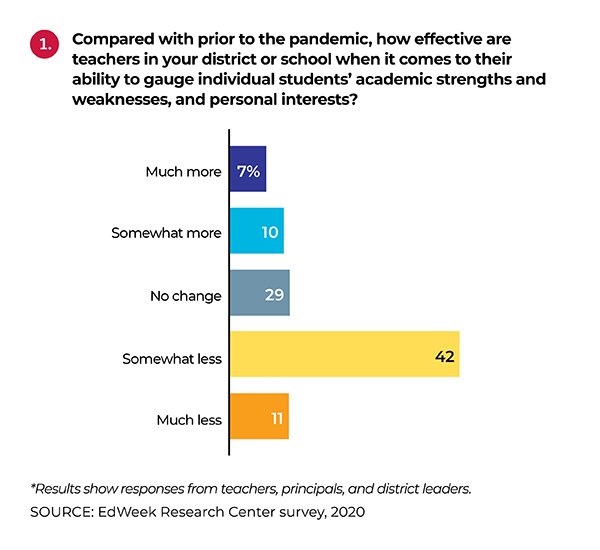 “Teachers are doing the best they can,” said Courtney Castelli, the assistant superintendent of Columbia Community Unit School district #4, near St. Louis, which is using a hybrid model of instruction. Elementary students come in for half days, and older students come in two days a week, with three remote.

But Castelli added that “it obviously is more difficult when you don’t have a consistent in-person relationship.” With in-person instruction, “you get a read for the room and you get a pulse of what’s going on in the classroom. When you’re not seeing them consistently, that becomes really difficult.”

“Body language is about 85 percent of the communication [with junior high school kids],” said Boyd Snyder, who teaches social studies to 7th and 9th graders in central Minnesota’s Royalton school district, where students are attending school in person. “You can’t get that talking to a screen.”

It’s even a challenge for schools that are doing in-person instruction, because students are expected to socially distance and wear masks.

“I’d say we’re probably doing about 70 percent” of the personalized instruction that happened pre-pandemic, said Mike Kish, the principal of Immaculate Conception School, a private Catholic school in Columbia, Ill., which is doing in-person instruction. Teachers used to go around the room and work directly with students, but now many are “stuck to their technology like an umbilical cord in the front of the room” to comply with social distancing.

Plus, it’s harder to get to know students when they have half their faces covered. “I picked up 60 new kids this year and when you’re just looking at the mask it’s hard not to get their names wrong,” Kish said.

Teachers are doing their best to find ways around the problem.

For instance, in Castelli’s district, teachers have been more apt to ask students to show their work so that they can see who is struggling or excelling. In classrooms, teachers used to do a lot of informal formative assessments, such as asking kids to hold up a number between 1 and 5 to demonstrate how well they mastered a particular concept.

Now these check-ins are a bit more formal.

2. One-on-One, Group Instruction Drops
Breaking kids up into small groups – a hallmark of project-based learning and class discussions in personalized learning environments – just isn’t as easy on Zoom or Google Meets, especially for the youngest learners. 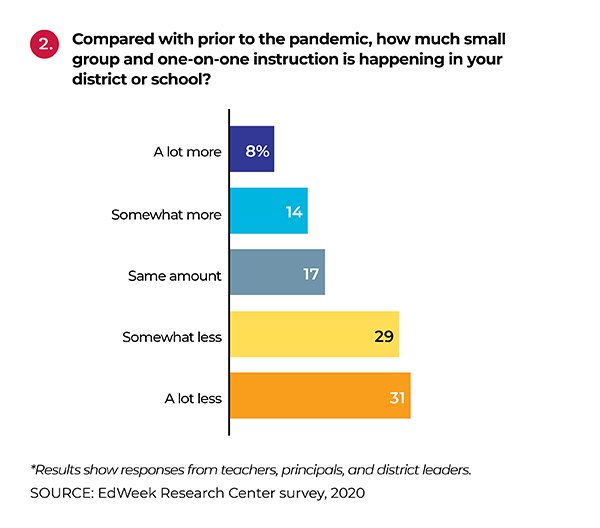 Natalie Waldrop, who teaches 4th grade at Whitnel Elementary School in the small, rural town of Lenoir, N.C., said many of her students don’t turn in their work, which makes it tough to figure out what their learning needs are.

“No small group instruction is happening because I don’t know who is where,” she said. And she’s worried students might cheat on assessments or get too much help from their parents. “I’m not going to trust a test that they take at home because they didn’t take it with me.”

One-on-one instruction is not much easier. For instance, Snyder said he can only have one student at a time share a screen with him. “I’ve got classes that are over 30 kids,” he said. “What do the other 29 do?”

Even districts that have stuck with in-person learning have struggled.

The Pewamo-Westphalia district is doing face-to-face classes, full-time for nearly all its 625 students. But desks are spaced out as far as possible. Kids are required to wear masks. And students are encouraged to maintain as much separation as they can from their peers.

That makes group work a challenge, Wright said. His teachers, he said, used to see themselves as facilitators, allowing students to learn as much as possible from one another. These days, though, many are relying on direct instruction because of social distancing requirements.

“We’ve gone away from tables that are good for group work,” Wright said. “It is hard for me to recall the last time [before the pandemic] we moved desks into a classroom. Usually, you’re moving tables in and desks out.”

But teachers are finding ways to make it work. Karen Doyle, a school librarian at Komarek 94 school district near Chicago, also teaches a science, technology, engineering, and math class in which she asks students to work in groups to manufacture the strongest possible glue.

This year, with classes operating remotely, the kids couldn’t get messy with the ingredients. Instead, Doyle put her students into three virtual groups. Each had to vote on the recipe they thought would work best. Then Doyle filmed herself making the glue using each groups’ instructions and testing to see which was the strongest.

“It worked,” she said. “It wasn’t ideal. They didn’t get their hands dirty.” But it gave her confidence that group work can happen, “it’s just harder, especially with the stuff that’s hands-on.” 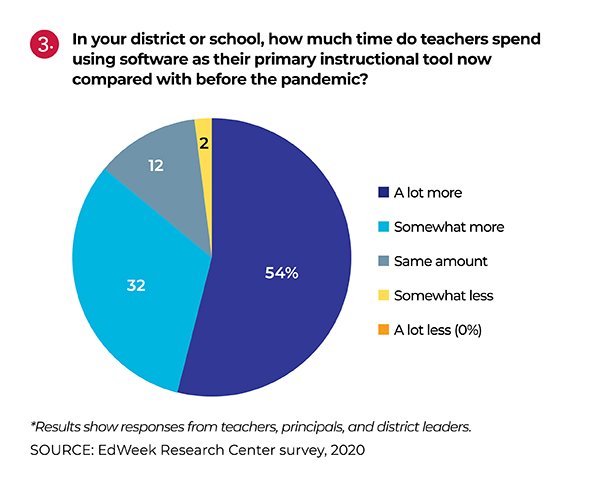 Software usage has skyrocketed in New York’s Hornell City school district, near Rochester, which is using a hybrid approach to instruction.

Doyle, who helps her colleagues with technology, said she’s had a lot of requests lately. “I definitely know that teachers are looking for things,” she said. Teachers are more likely to use apps such as BrainPOP, a website with instructional videos, and Nearpod, which offers interactive videos and formative assessments.

“I think it’s a really good thing that teachers are being exposed to these kinds of apps,” Doyle said.

But educators also know that technology can’t be the only way that students are learning, even if their classes are partly or mostly remote, said Lois Costa, the superintendent of the Hampton schools, a 1,000-student K-8 district on the coast of New Hampshire. The district has been operating in a hybrid mode this school year, with two different cohorts of students coming in two days a week and the rest of instruction online.

Costa wants her teachers to “be mindful of the other choices that we want to give our students in addition to technology.”

4. Most Say PD Is Effective
More than two-thirds of educators surveyed said that the professional development to help personalize learning for kids in a remote or hybrid setting has been “very effective” or at least “somewhat effective” in their schools or districts. A little more than a quarter said it has been “somewhat” or “very” ineffective. 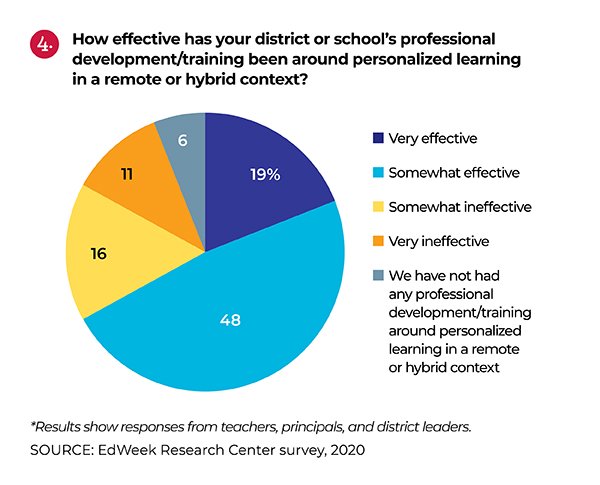 “We’re being extremely thoughtful both in terms of acting on feedback and trying to give teachers what they need when they need it,” Palotti said. “The PD has been very pointed and very flexible and very targeted to our current needs.”

But he added that he won’t really know how effective the district’s efforts were until June. “The success in terms of a tangible result [for] student learning and performance remains to be seen.”

Doyle was part of a team of educators that spent the summer trying to design professional development for colleagues. And she said that while they did “a good job with what we had,” it wasn’t sufficient.

“It did not help as much as we hoped it would,” Doyle said. “I think the time allocated for professional development just isn’t enough for technology because everybody is having to jump in with both feet. And some people’s comfort levels just aren’t there.”

Only 6 percent of the educators surveyed said their schools or districts didn’t have any professional development in this area. For instance, Waldrop said her district has offered virtually no assistance on personalizing learning for kids in a virtual environment.

And the same goes for Snyder’s school in Minnesota. “Oh gosh, no!” he said, when asked if he’d gotten help in personalizing instruction for students in a remote context. “I think everybody is learning as they go.”