Published in the first generation Federal Observer, in the category, Deliver Us From Evil!, December 7, 2001 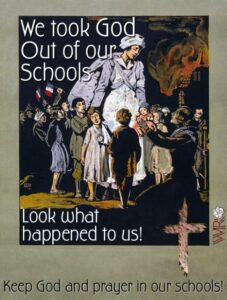 It was not surprising to see several state legislatures consider school prayer bills in the aftermath of Sept. 11. What was surprising was who sponsored some of those measures.

In Florida and Pennsylvania, the principal sponsors of bills to bring God back to the classroom are not conservative Republicans but black Democrats.

In Tallahassee, the state House in April easily passed a bill written by Rep. Wilbert “Tee” Holloway, D-Miami, to allow student-led prayers at graduations and student assemblies. With no sponsors in the state Senate, the measure went nowhere.

Things will be quite different when the next session convenes in January, Holloway vowed. As a parent, Holloway said prayer has been taken from him and his children. Under his proposal, students can recite non-sectarian prayers with no guidance from school administrators at events where attendance is not required.

This bill would not violate U.S. Supreme Court decisions banning prayers at commencements and football games. Holloway explained these are solemn events and students are volunteering to lead the prayers

~ “One Nation Under God” ~
The Sept. 11 attacks “rallied the country to realize we are all one nation under God,” Holloway told NewsMax.com.

When asked if sponsoring a school prayer bill was an unusual move for a legislator with a “D” after his name, Holloway said it was “unfortunate, and maybe we should as Democrats” support more legislation like this.

Holloway knew he would get little support from fellow Democrat legislators, some of whom told him they were “offended by the bill and feel it is unconstitutional.”

Next year, Holloway is confident the bill will pass both houses. He will have a companion bill in the state Senate this time – but could not get a fellow Democrat to sponsor it. Two Republicans will sponsor the measure in the upper house.

~ End the Silence ~
Holloway said the bill definitely did not call for a moment of silence. “Why would you want to silence me when I want to speak to my God and savior?” Holloway asked.

Silence is the aim of a measure overwhelmingly approved by the Pennsylvania House of Representatives in October. While teachers in government schools previously had the option of calling for a moment of silence before class, the bill would make it mandatory.

The prime sponsor of the original proposal was also a black Democrat, Rep. Thaddeus Kirkland of Chester. The measure specifically says the time “is not intended to be … a religious service or exercise, but shall be considered as an opportunity for silent prayer or meditation on a religious theme … or a moment of silent reflection on the anticipated activities of the day.”

The language was eventually appended to another bill requiring all schools to display U.S. flags and all students to recite the Pledge of Allegiance or sing the national anthem every day. The measure passed the lower House on a 200-1 vote and is now before a state Senate committee.

“At a time when our nation is standing together against hate, it is essential that we put prayer back in our schools,” Kirkland said. “We would not only be adding prayer to our schools, but unity, peace and solace,” he added.

Some school districts are not waiting for legislative action. In the Los Angeles suburb of West Covina, the school board recently gave first approval to a mandatory moment of silence. Board President Mike Spence told the Los Angeles Times on Sunday that the idea had been talked about, but after Sept. 11, “children and staff need time to reflect or pray.”

~ Amend the Constitution? ~
While all of these proposals were drafted with an eye on U.S. Supreme Court decisions, one congressman believes the best way to avoid constitutional questions is to change the U.S. Constitution.

Rep. Ernest Istook, R-Okla., plans to reintroduce his proposed constitutional amendment that would read, in part, “the people’s right to pray and to recognize their religious beliefs, heritage or traditions on public property, including schools, shall not be infringed.”

It was brought to the House floor in June 1998 and got a plurality of the votes cast, 224-203, but fell short of the required two-thirds majority. Adding it to the Constitution would also require a two-thirds vote in the Senate and ratification by three-fourths of the state legislatures.

Istook’s measure is the real concern at Americans United for the Separation of Church and State. Group spokesman Rob Boston said moments of silence and the posting of “In God We Trust” or “God Bless America” signs are constitutional.

The signs have both civil and religious connotations, Boston told NewsMax.com. As for moments of silence, “most students just ignore them,” Boston said.

One of the aims of the Americans United organization is to help educators and parents find ways to integrate religion and classrooms, the group says. Boston claimed the group encourages after-class Bible groups and teaching the importance of religion in American history.

Boston said the Florida measure was “the wrong way to go.” He also is not confident in the future of Pennsylvania’s moment-of-silence bill.

As time passes beyond Sept. 11, Boston said, “cooler heads will prevail.” While some of the ideas for bringing prayer to schools are perfectly acceptable, he emphasized, “amending the Constitution would be an overreaction.”