An executive order creates the 1776 Commission to counter Marxist propaganda. 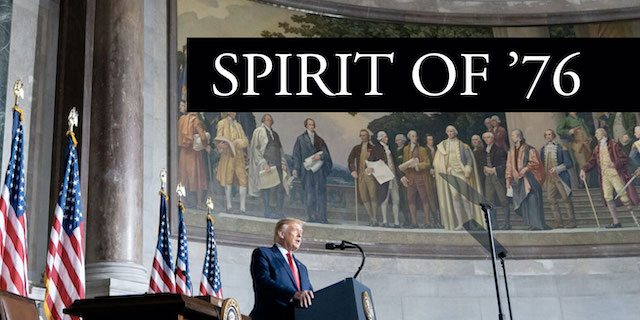 To make America great again, Americans must know what it was that made our nation great in the first place. On Thursday, President Donald Trump set about addressing this by issuing an executive order creating the 1776 Commission.

The president explained the motivation behind his order, stating, “The narrative about America being pushed by the far left and being chanted in the streets bear a striking resemblance to the anti-American propaganda of our adversaries.” Noting Critical Race Theory, the training that he banned for federal employees just two weeks ago, Trump asserted, “This is a marxist doctrine, holding that America is a wicked and racist nation — that even young children are complicit in oppression — and that our entire society must be radically transformed.”

He cited a controversial pamphlet on “Whiteness and White Culture” that had been produced by the Smithsonian Institution for the National Museum of African American History and Culture but was later changed due to public backlash. “[It] alleged that concepts such as hard work, rational thinking, and the nuclear family and belief in God were not values that unite all Americans, but were instead aspects of whiteness,” Trump noted. “This is offensive and outrageous to Americans of every ethnicity. It is especially harmful to children of minority back grounds who should be uplifted, not disparaged. Teaching this horrible doctrine is a form of child abuse in the truest sense of those words.”

The president also blasted that infamous piece of leftist histrionics known as the 1619 Project, saying, “This project rewrites American history to teach our children that we were founded on the principles of oppression, not freedom. Nothing could be further from the truth. America’s founding set in motion the unstoppable chain of events that abolished slavery, secured civil rights, defeated communism and fascism, and built the most fair, equal, and prosperous nation in human history.”

“Our mission is to defend the legacy of America’s founding, the virtue of America’s heroes, and the nobility of the American character,” Trump declared, “We must clear away the web of twisted lies in our schools and classrooms and teach our children the magnificent truth about our country. We want our sons and daughters to know that they are the citizens of the most exceptional nation in the history of the world.”

Therefore, Trump stated the 1776 Commission “will encourage our educators to teach our children about the miracle of American history and make plans to honor the 250th anniversary of our founding.” By teaching the nation’s young “to love America with all of their heart and soul,” Trump argued, “we will save this cherished inheritance for our children, for their children, and for every generation to come.”

With this latest EO, Trump has not only sought to stop the promulgation of poisonous anti-American Marxist propaganda, but he’s gone on the offensive in recognizing that America’s youth must not be robbed of the true knowledge of their glorious birthright. There is no nation more deserving of its citizens’ love, appreciation, and commitment than the United States.

Written by Thomas Gallatin for The Patriot Post ~ September 18, 2020