Relates to the Affairs Between the The Confederate and United States 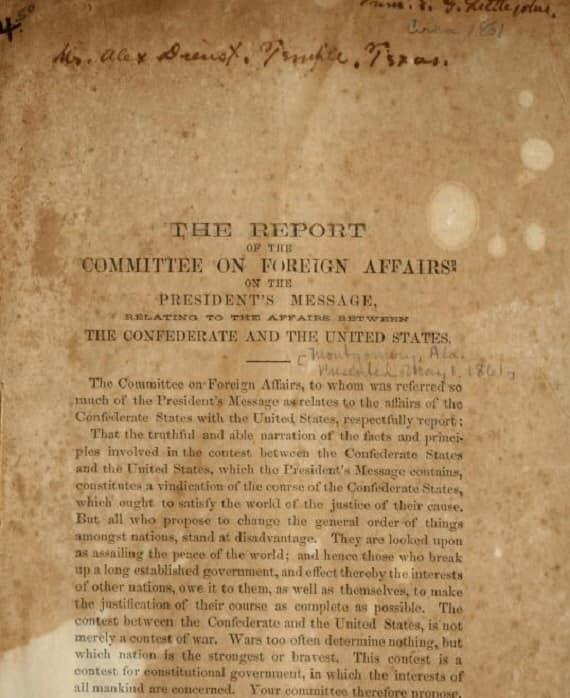 The Confederate Committee on Foreign Affairs regarding the cause of secession: “The tariff alone, would have been ample cause for a separation of the Southern from the Northern.” This speech was presented at Montgomery, Alabama on May 1, 1861. ~ Rod B. O’Barr

“The contest between the Confederate and the United States, is not merely a contest of war. Wars too often determine nothing, but which nation is the strongest or bravest. This contest is a contest for constitutional government, in which the interests of all mankind are concerned. Your committee therefore propose on the wide subject committed to them, briefly to present some views in support of the President’s positions, which may not be useless in elucidating the relations between the Confederate and the United States.

The real issue involved in the relations between the North and the South of the American States, is the great principle of self-government. Shall a dominant party of the North rule the South, or shall the people of the South rule themselves. This is the great matter in controversy. After the lapse of eighty-four years, this party of the North set up the same pretension the British Parliament claimed over our ancestors in 1776. As the British crown contended, that the British Parliament was omnipotent in its Legislation over the Colonies, so the Northern people now contend, that the Congress of the United States through their majority, is omnipotent in its legislation over the people of the South.

Whilst the North — the stronger section of the Union — was not united in using its power in Congress, the Southern people tolerated the union with them. Although a sectional minority, they were not necessarily ruled by the majority section, however despotic were its principles, until that section became united in the use of its sectional power. That union was effected, in the late Presidential election. On the fiscal operations of the government in the laying and the expenditure of the taxes, they were previously not sufficiently united, completely to rule the South. The party weight of the South, and the ability and skill of its public men, kept them at bay; whilst the people of the North-West, being like the people of the South, an agricultural people, were generally opposed to the protective tariff policy — the grand sectionalising instrumentality of the North. They were allies of the South, to defeat this policy. Hence it has been only partially, and occasionally successful. To make it complete, and to render the North omnipotent to rule the South, the division in the North must be healed. To accomplish this object, and to sectionalise the North, the agitation concerning African slavery in the South was commenced. This institution was purely sectional, belonging to the South.

Antagonism to it in the North must also be sectional. The agitation would unite the South against the North, as much as it united the North against the South; but the North being the stronger section, would gain power by the agitation. Accordingly, after the overthrow of the tariff of 1828, by the resistance of South Carolina in 1833, the agitation concerning the institution of African slavery in the South was immediately commenced in the Congress of the United States. It was taken up by the Legislatures of the Northern States; and upon one pretext or another in and out of Congress, it has been pursued from that day to the fall of 1860, when it ended in the election of a President and Vice President of the United States, by a purely sectional support. The great end was at last obtained, of a united North to rule the South. The first fruit the sectional despotism thus elected produced, was the tariff lately passed by the Congress of the United States.

By this tariff the protective policy is renewed in its most odious and oppressive forms, and the agricultural States are made tributaries to the manufacturing States. It has revived the system of specific duties, by which, the cheaper an article becomes, from the progress of art or the superior skill of foreign manufacturers — the higher is the relative tax it imposes. Specific duties, is the expedient of high taxation, to enforce its collection. This tariff illustrates the oppressive policy of the North towards the South, and abounds in high taxation by specific duties. It is a war on the foreign commerce of the country, in which the Southern people are chiefly interested. Exclusively an agricultural people, it is their policy, to purchase the manufactured commodities they need, in the cheapest markets. These are amongst the nations of Europe, who consume five-sixths of the agricultural productions of the South. The late tariff passed by the Congress of the United States, was designed to force the Southern people, by prohibitory duties to consume the dearer manufactured commodities of the North, instead of the cheaper commodities of European nations. What is this but robbery? Does it not take from one citizen or section and give to another? The foreign trade of the United States, has always been carried on, by our agricultural productions. Our exports, are the basis of the imports, of the United States. Upon what principle of justice or of the Constitution, have the people of the North intervened between us and our natural customers, and forced us by the use of the Federal Government — laying prohibitory duties on the production of foreign nations — to consume their productions? Shall we not have the right to deal directly with those who consume our agricultural productions and who in return can supply us with their cheaper manufactured commodities. If foreign nations can sell us freely their manufactured commodities, in consequence of their greater cheapness — can they not afford to give us more for our cotton? And if we pay less for their manufactured commodities— are we not so much the richer by the trade? The tariff alone, would have been ample cause for a separation of the Southern from the Northern The reign of sectional oppression and tyranny, anticipated by the seceding States, is fully inaugurated at Washington, by the passage of this act.”