In “The Decadent Society,” Ross Douthat’s definition of decadence reaches more deeply into the underlying causes of our present rot. Is American society sick, sclerotic, sterile, and stagnant, as he suggests? 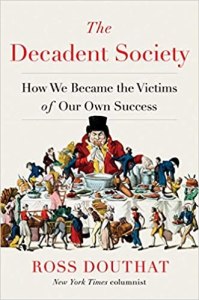 There is a chapter in Ross Douthat’s new book, The Decadent Society, called “Waiting for the Barbarians.” The book came out just before our present summer of discontent in which we’ve seen home-grown barbarians rampaging through our streets. Like the old-fashioned breed of barbarians, their ignorance blends mightily with their violence. The only difference being that they have added to their ignorance and violence a distasteful stench of self-righteousness.

Mr. Douthat analyzes the state of American society by first defining his terms. By “decadence” he does not simply mean moral depravity, the disgusting self-indulgence of a Caligula, or the insane violence of Nero or Idi Amin. He does not exclude these excesses, but his definition of decadence reaches more deeply into the underlying causes of our present rot. He does so with the symbolism of “four horsemen”: Stagnation, Sterility, Sclerosis, and Repetition.

Stagnation is that torpor that sets in after great accomplishment. Post-war America was young, energetic, and brimming with a can-do attitude. The sky was not the limit. That’s why we sent men to the moon. Since 1968, however, things began to slide. Invention, entrepreneurship, and innovation stagnated. We weren’t sure where to go next.

Along with this stagnation has come sterility. By this, Mr. Douthat refers to the literal sterility that has come with the universal acceptance of artificial birth control and abortion, but there is more to it than that. The falling birth rate, plummeting numbers of marriages among young people, and the looming demographic winter are only signs of a deeper sterility of thought, faith, and imagination. This sterility and lack of new life, youth, and vigor has led to another sign of old age and decay: sclerosis.

Sclerosis is not only the hardening of the body. It is the calcification of the bones, the hardening of the heart, the closing of the mind, and the retreat into the feebleness of age. Our society exhibits all the incapacities of old age without the wisdom. One calls to mind T.S. Eliot’s recurrent images of barren senescence: “Here I am, an old man, in a dry month, being read to by a boy, waiting for rain.”

Mr. Douthat’s final horseman is repetition. He notes how bleak and unimaginative the arts are in our society. Films and television series repeat the same tired themes and worn-out storylines. Stock characters replace realistic characters in predictable dramas and yawn-inducing “entertainment.” What music is being composed that is not repetitious and derivative? What novels and poetry are being written that are not re-hashed, warmed-up leftovers from a more illustrious age?

If all of this is not depressing enough, Mr. Douthat points out that history teaches us that this state of decadence could very well continue for a long time. Yes, the threat of revolution simmers, and barbarian hordes are forever stamping their feet at the borders. But a “kindly despotism” of the nanny state usually keeps the revolutionaries sedated. Bread and circuses keep them quiet, and if they will not be still let them eat cake. We can drift along in this dull state being comfortably numb, and Mr. Douthat even makes the point that such affluent comfort in our present age is more comfortable than ever. From a materialist point of view, more and more of us have more and more stuff and a better and better standard of living than ever before. Why shouldn’t our life in the La-Z-Boy continue happily?

In the final section of this excellent meditation on the state of our society, Mr. Douthat considers what might break the stalemate. Historically there were three interventions that ended a culture’s state of decadence: Catastrophe, Renaissance, and Providence. To put it simply, a meteor, a Michelangelo, or a Divine Plan. Some unexpected disaster upsets the easy chair, a new generation of geniuses kickstart our creativity, or God himself reveals another way perhaps through a supernatural outpouring of grace or a groundswell of religious revival.

Mr. Douthat’s reflection on a society satiated with stuff, technologically in the stratosphere and so successful that it has nowhere else to go, is a good, if somewhat depressing, read. My criticism of the book is similar to that I’ve had of other recent books on the state of Western culture and, more specifically, American society. Ross Douthat, like Mary Eberstadt in Primal Screams: How the Sexual Revolution Created Identity Politics and Rusty Reno in Return of the Strong Gods, is too often blinkered by American insularity, and this leads to undue pessimism.

Yes, America might be a ship without a skipper headed for the rocks, but the world is bigger than the United States of America, and American conservative commentators too often do not stop to consider the other forces moving through the rest of the world.

John Allen’s 2009 book,  detects trends in global Christianity and world culture that are anything but decadent, stagnant, and sterile. The population in the developing world is young, energetic, innovative, and positive. Nor are they all barbarians. Second- and third-generation Christians in Africa, Asia, and Latin America are more often upbeat, courageous, and inventive. They are lean and hungry, positive and full of faith.

Mr. Douthat’s three choices for the end of the decadent society are Catastrophe, Renaissance, or Providence. I want to ask why it needs to be “either-or”? I can see the catastrophe of COVID-19 combined with continued social unrest combined with a renaissance of a vibrant Christian culture springing up from Africa and Asia—and all of it overseen and empowered by a Divine Providence that is itself ever ancient and ever young. 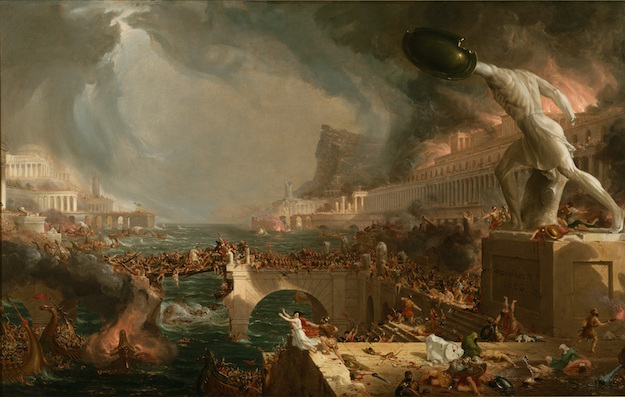 Is our society sick, sclerotic, sterile, and stagnant? No doubt, but as the melancholy poet Gerard Manley Hopkins observed in the face of financial corruption, environmental pollution, urban blight, and moral decay,

for all this nature is never spent;
There lives the dearest, freshness, deep down things; And though the last lights off the black West went
Oh, morning at the brown brink eastward springs—Because the Holy Ghost over the bent
World broods with warm breast and with ah! bright wings.

Written by Dwight Longenecker for The Imaginative Conservative ~ June 28th, 2020