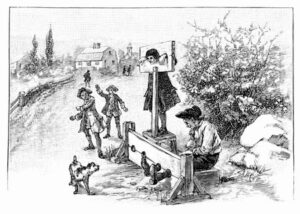 As I have examined the phenomenon of government controlled schooling, it has been a continuing mystery to me why this type of totalitarian enterprise could have been imposed on a country that was ostensibly founded on the primacy of individual liberty and freedom of conscience. I can understand why today’s citizens are generally oblivious to freedom of conscience issues due to the indoctrination and psychological conditioning that are essential components of government schooling – but why would such a system be accepted by citizens who had not been programmed to accept it? As noted in my previous posts, that system was imposed through propaganda and false promises and was often met with resistance, but due to the police power of the state it was ultimately imposed top-down by special interests. However, even considering political manipulation and the raw power of the state, there still seemed to be something missing.

My recent explorations of the history of the 1st Amendment have helped provide some clarity on the issue. One important fact to remember about our nation’s history is that there was very little religious freedom in colonial America. Yes, it is true that the establishment of some of the colonies was driven by people escaping religious intolerance in England but the rulers of those colonies wanted freedom only for their particular brand of Christianity and had little tolerance for presumed heretics such as Quakers and Baptists. In fact, persecutions of varying degrees of severity were the norm for those dissenters. Civil and criminal laws were heavily based on Old Testament theology so punishments were very harsh by modern standards. Frankly, looking back from the 21st Century, it seems difficult to find Christ in the “Christianity” that was dominant at the time. The only colony with true religious freedom was Rhode Island. That colony was founded by Roger Williams who was banished from Massachusetts for preaching his Christian beliefs.

Unfortunately, with the advent of government schooling in America in the 19th Century, the country began to return to its pre-revolutionary intolerant roots. Where there were once tax-supported churches and clergy, there were now taxes imposed for schools and teachers. Compulsory church attendance laws were replaced with school truancy laws. Laws enforcing the Sabbath became curfews imposed on school age children. In early America, Baptists were accused of child abuse since they refused to baptize infants. In modern America, anyone not schooling their children in a government approved manner is presumed guilty of the same charge. It seems that government schooling has become the modern version of an intolerant religion. As time has progressed and the religion of schooling has grown in power, the penalties for dissenting have grown more harsh with the preferred punishments of heretics being fines, incarceration and the state seizing children from otherwise exemplary parents [such police state actions are frequently reported by the HSLDA] .

Just like most colonists in early America, today’s citizens accept (and often embrace) the modern equivalent of those unjust laws. As before, dissent is seen as dangerous heresy that must be crushed. The terminology and the mechanisms of control have changed but the result is the same: oppression. Unlike colonial America, we have a Bill of Rights that is supposed to protect us from oppression by our government. Will we ever be able to reassert our rights and constrain government to its proper role in this area? All I know is that such a question will not likely receive serious consideration in any high school civics lesson – even if a young heretic manages to raise the issue.