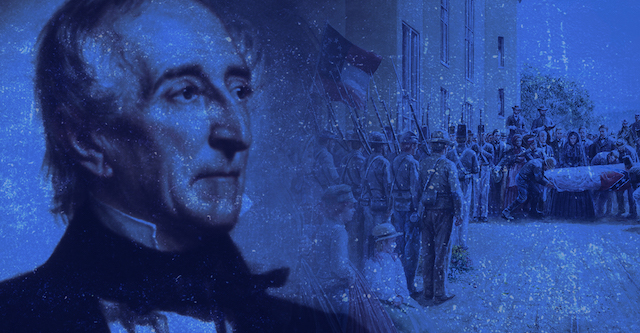 While certainly not one of the best-known presidents, John Tyler holds several incredible distinctions. He inherited the Presidency after being elected Vice-President under William Henry Harrison, who famously died only 32 days after taking office. Tyler’s presidency was full of the turmoil that would split the Union decades later, and while an ardent States’ Rights supporter, he did show a willingness to compromise.

But perhaps his greatest distinction is as the only US President whose death was not formally recognized in Washington D.C., and the only to be buried under a non-US Flag. For Tyler, a Virginian, had worked to prevent secession, but ultimately, like so many, saw no hope for reconciliation, and believed that secession could be made peacefully. He served in the Virginia Convention for Secession, and later in the Confederate Congress. But early in the War, he died suddenly, and his funeral was a grand Confederate affair.

It is interesting to see the response of the New York Times to the death of a former President, which is copied in full below:

JOHN TYLER, of Virginia, the only Ex-President resident in the seceded States, is dead. There are yet some gentlemen living who have sat in the presidential Chair — VAN BUREN and FILLMORE in New-York, PIERCE in New-Hampshire, and BUCHANAN in Pennsylvania — all in the loyal States. The events of Mr. TYLER’S career, though familiar to almost everybody, may, now that he has passed forever off the stage, be briefly recapitulated.

The ancestors of JOHN TYLER, the tenth President f the United States, were among the earliest English settlers of Virginia. The family trace their lineage back to WAT TYLER, who in the fourteenth century, in the reign of the second RICHARD, headed the insurrection in England known by his name. Mr. TYLER’s grandfather was Marshal of Virginia, and his father at one time Governor of the same State.

The subject of our sketch was born in Charles City County, Virginia, in 1790, and was consequently 72 years of age at the time of his death. At the age o twelve he entered William and Mary College, and graduated when but seventeen years old. After leaving college he devoted himself to the study of law, and at nineteen years of age he appeared at the bar of his native county as a practicing lawyer — a certificate having been given him without inquiry as to his age.

As soon as he reached his twenty-first year he was chosen a member of the House of Delegates. For five successive years he was elected to the same position. During this time he was attached to the Democratic Party. At the time the British forces were in Chesapeake Bay, Mr. TYLER raised a volunteer company, which was never brought into action and his military career was consequently short and bloodless, but he thus acquired the title of “Capt. TYLER,” by which he was generally after designated. In 1816, he was elected to Congress, to fill an unexpired term, and next year was reelected; in 1819, he was again elected to the same position, but resigned shortly after on account of ill-health. He then returned to the practice of his profession, but in 1823 was again elected to the State Legislature, and became an ardent advocate of the system of public improvements by the State.

In 1825, he was elected Governor of Virginia, the vote being, on joint legislative ballot, for TYLER 131, for FLOYD (the thief) 81, scattering 2. At the next session of the Legislature he was unanimously reelected Governor; but before the expiration of his gubernatorial term, he was chosen to the Senate of the United States, on the first ballot, by five votes, over the celebrated JOHN RANDOLPH. At the Presidential election of 1824, Mr. TYLER supported WH. H. CRAWFORD for the Presidency; but when J.Q. ADAMS was elected, he at first supported him, but soon after changed his views, and became an opponent of the Administration in the Senate. He voted against the tariff of 1828, and in the debate concerning the powers of the Vice-President, supported the positions assumed by Mr. CALHOUN.

On the accession of JACKSON to the Presidency, Mr. TYLER supported his Administration. He opposed projects of internal improvement by the General Government, the United States Bank and the Protective Tariff, but was in favor of a tariff for revenue thought he opposed that of 1833. With the South Carolina nullifiers of 1832 Mr. TYLER sympathized, and when President JACKSON took ground against the revolutionary proceedings of that State, Senator TYLER withdrew his support from the Administration. The Force Bill being introduced into the Senate, vesting extraordinary powers in the President, Mr. TYLER opposed it, and when the bill was passed, Mr. TYLER’s was the only name in the negative, Mr. CALBOUN and the other nullifies having left the Senate Chamber until after the vote was taken. Mr. TYLER, however, afterwards voted for Mr. CLAY’S compromise act, which became law. He was reelected to the Senate for six years from the 4th of March, 1833; and in the session of ’33-‘4 voted for the resolutions of censure against Gen. JACKSON for removing the deposits, on the ground that the President’s action was opposed to the dogma of State rights. His course in the Senate effected a separation between him and the Jackson Democracy.

When the resolutions expunging the vote of censure on JACKSON from the records of the House, known as the “expunging resolutions,” came up, Mr. TYLER was instructed by the Legislature of Virginia to vote for it; but as he had, when entering on political life, strongly advocated the doctrine of Senators always following instructions, he chose to resign his seat rather than obey.

In 1838, Mr. TYLER was elected to the Virginia Legislature, this time by the Whigs. During the session he acted with that party, and next year was a delegate to the Whig National Convention. In that Convention he supported Mr. CLAY; but as HARRISON was nominated, it became necessary to take the Vice-President from the South. Mr. TYLER was selected, partly by chance and partly from the lack of any other available candidate. Had the event of his succession to the Presidency been contemplated, it cannot be doubted that he would have been rejected. But “Tippecanoe and Tyler too” were triumphantly elected by the people; but in one month after President HARRISON’s inauguration, death removed him from the Presidential chair; and in April, 1841, TYLER became his successor.

His subsequent treachery to HENRY CLAY and to the Whig Party, which had made him President, added a new term to our political vocabulary. His treachery to all men and parties, his total loss of popularity, and the embarrassment and confusion which he brought upon the country, are matters of history — though they are all now lost sight of in the later and more infamous appellation of traitor. The great events of his Administration were the vetoing of the United States Bank bill, and the making of preparations for admitting Texas — a measure which was brought about shortly after his retirement in 1845.

After the expiration of his Presidential term he retired to private life, the most unpopular public man that had ever held any office in the United States. From that period until secession times he figured but little in public, but devoted himself to the cultivation of his estate, the increase of his negroes and the accumulation of money.

In February of last year, as will be remembered, Mr. TYLER was President of the Peace Convention which met at Washington to adjust the national difficulties. On taking the chair, he made a sounding speech, (then published in full in the TIMES,) in the course of which he said:

“Our godlike fathers created — we have to preserve. They built up through their wisdom and patriotism monuments which have eternalized their names. You have before you, gentlemen, a task equally grand, equally sublime, quite as full of glory and immortality. You have to snatch from ruin a great and glorious Confederation; to preserve the Government and to renew and invigorate the Constitution. I confess myself ambitious of sharing in the glory of accomplishing this grand and magnificent result. To have our names enrolled in the Capital, to be repeated by future generations with grateful applause — this is an honor higher than the mountains, more enduring than monumental alabaster.”

And alas! how hopeless now are the chances of JOHN TYLER’s name ever reaching such an enrollment!

On the conclusion of this speech, Mr. CHASE, now Secretary of the Treasury, expressed himself as particularly gratified, and assured Mr. TYLER, as most of the other Commissioners did, that they were ready to follow where Virginia led.

But as the Peace Conference progressed, TYLER was found to be one of its least conciliatory and most ultra members. During the whole time he was in league with the Montgomery conspirators, and in treasonable correspondence with JEFF. DAVIS. From that Conference he went as a delegate to the Virginia State Convention, and did all he could there to take the State out of the Union. After secession he was elected us a member of the Rebel Congress, and has used all his powers to keep his State in hostility to the National Government. 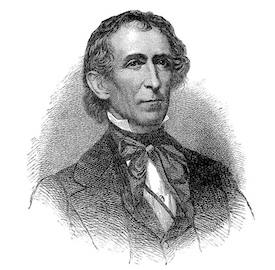 He ended his life suddenly, last Friday, in Richmond — going down to death amid the ruins of his native State. He himself was one of the architects of its ruin; and beneath that melancholy wreck his name will be buried, instead of being inscribed on the Capitol’s monumental marble, as a year ago he so much desired.

While President of the United States, and at the age of fifty-two, Mr. TYLER was married a second time, and to a lady of New-York, Miss JULIA GARDNER, daughter of DAVID GARDNER, Esq. The marriage took place in this City, in June, 1844. This wife still survives him, with several children, some of them quite young. It will be remembered that Mr. TYLER’s mansion at Hampton, over which he hoisted the rebel flag last Spring, has been for some time occupied as quarters by our troops.

Written by the Archibald Gracie Camp #985 for Sons of Confederate Veterans ~ April 11, 2016