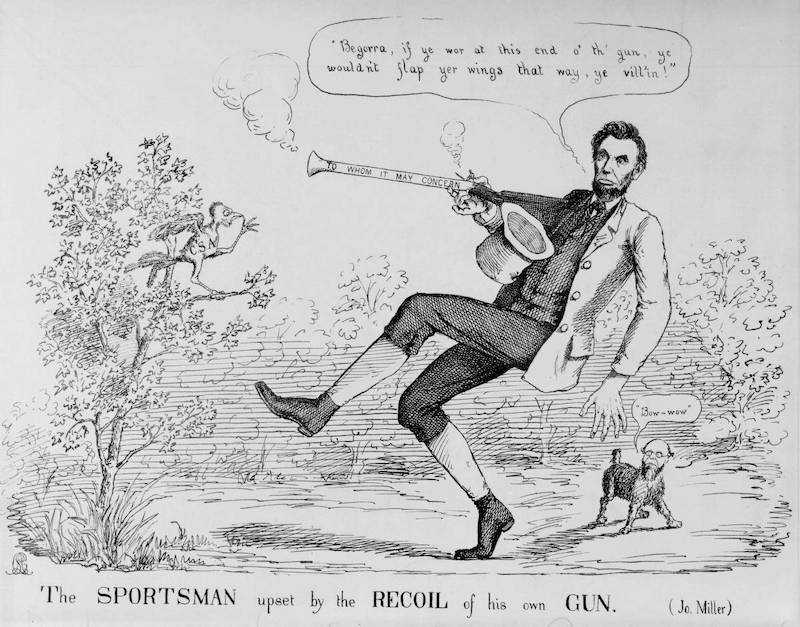 Lincoln is portrayed as meek and ineffectual in his prosecution of the war. In a wooded scene Lincoln, here in the character of an Irish sportsman in knee-breeches, discharges his blunderbuss at a small bird “C.S.A.” (Confederate States of America). The bird, perched in a tree at left, is unhurt, but Lincoln falls backward vowing, “Begorra, if ye wor at this end o’ th’ gun, ye wouldn’t flap yer wings that way, ye vill’in!”

At right Secretary of War Stanton, who has the body of a dog, barks, “Bow-wow.”

Lincoln’s rifle is labeled “To Whom It May Concern.” These were the opening words of an announcement written by Lincoln in the summer of 1864. Journalist Horace Greeley had discovered that two emissaries of president of the Confederacy Jefferson Davis were in Canada, and urged Lincoln to make an offer of peace. Lincoln sent Greeley to Canada, where he found that the diplomats had neither credentials nor authority. Lincoln afterward announced that, “Any proposition which embraces the restoration of peace, the integrity of the whole Union, and the abandonment of slavery . . . will be received and considered by the Executive government of the United States.”