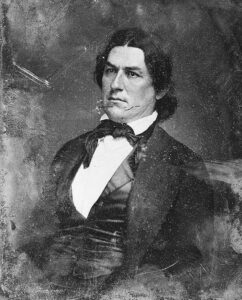 On his way down to Montgomery to assume his new role as Secretary of State for the Confederacy in May 1861, Robert Hunter took the opportunity to speak to the crowds at the various train stops; Atlanta was one of them. The Co-Editor of the Southern Confederacy, J. Henly Smith was there to record his comments:

“Our cause, our institutions, our hopes, and our destinies are one. I rejoice to be able today to proclaim to you the union of the South for the sake of the South, and not only for the sake of the South, but for the sake and in the name of liberty – the last refuge of man oppressed, and the hope of the world. I am thoroughly convinced, that, independent of the negro question, we have not left the North any too soon. Compare their Government and its workings, and their institutions with ours! Their ancient safeguards are being trampled underfoot by those now in power; and is done, too, at the behest of their own people. On the other hand, show me a programme or a form of government, which promises more for mankind, or offers greater future security and happiness to the people than the Constitution of the Confederate States! We have everything to hope for and encourage us, in upholding it.

But this is no time for talk. The enemy approaches us. They have gathered a large force along our border, and threaten to invade our soil for the purpose of subjugating us. But we are ready and able to receive them. We wage no aggressive war on anyone. We stand on our own soil; and by the help of God, we will defend it to the last, against the invading hordes of Abolitionists which now threaten us with destruction. When I left Virginia, I was informed of their gathering on our borders. Our own brave sons, were up in arms, going forth to meet them. As I came along, I met the South Carolina regiment going forth to shed their blood if need be in our defense. I also saw the gallant Georgia soldiers which have rallied to the defense of Portsmouth and Norfolk. As I passed through Lynchburg. I saw two splendid Regiments of Alabama soldiers on their way to the point of our country’s danger and still, as I came on, I met the brave soldiers from Mississippi coming to our rescue. I also noticed that a most cordial and hearty greeting and welcome was everywhere extended to all those soldiers who have so patriotically, and with such alacrity, stepped forth to defend our country in this, her hour of danger. The men met them with shouts and cheers. The women and children, from the windows, waved their handkerchiefs and threw their bouquets.

But as I said before, this is no time for speaking. Events are rapidly hastening upon each other and upon us. Now is the time for action. The South is prepared and ready for it. When we have fought through this war-this unnatural war which the fiendishness of abolition bigotry and fanaticism is waging upon us; when we achieved a glorious victory and triumphed over all our foes when our liberties have been secured and Peace shall spread her gentle wings and return to us from her banishment to take up her abode with us around our altars and our hearthstones – then we can speak to all the world until of our goodly heritage our superior government the liberties of our people the rich blessings we shall enjoy. But excuse me from saying anything further. I am worn down, and almost exhausted, from the fatigues of travel; but I was unwillingly to pass through without saying something for our cause when I heard that you gallant Georgians had assembled to hear a word from the Virginian. You believe as we do in Virginia that we are engaged in a common cause. The rights of Virginia and the South are one, We are embarked together and their defense. In this cause, we shall stand or fall.”

LIBERTY
One thing that jumped out at me was the fact that Hunter mentions ‘liberty’ in his speech; which reflects the importance of the Madison Doctrine. No State parted with any attribute of her sovereignty. Each sovereign State, on entering the Union, did so, with the necessarily — implied COMPACT, that she would preserve the Union, so long as her associate States should respect the conditions of the COMPACT, and so long as her people should not be subjected to intolerable oppression, constitutional or unconstitutional. This COMPACT however, is upheld by NO GUARANTEE, save that the plighted FAITH OF STATE SOVEREIGNTY. The Sovereign States were subjected to the dictation of NO COMMON ARBITER. In case of infraction of the Constitution or of oppression of any sort, real or supposed, each State, for herself, must be the judge of the infraction and of the mode and measure of redress; That is liberty.

LINCOLN AND THE NORTHERN STATES
The second thing I noticed was Hunter’s reference to Lincoln’s exercising powers not granted to him in through Compact or breaking the laws created from it. He also references the Northern States support in coercing the States back into the Union. Hunter said, “Their ancient safeguards are being trampled underfoot by those now in power; and is done, too, at the behest of their own people.”

COERCION
Lastly, I noticed Hunter mentions subjugation in his speech:

“The enemy approaches us. They have gathered a large force along our border, and threaten to invade our soil for the purpose of subjugating us. But we are ready and able to receive them. We wage no aggressive war on anyone. We stand on our own soil; and by the help of God, we will defend it to the last, against the invading hordes of Abolitionists which now threaten us with destruction”

Again, Hunter indirectly referencing the Madison Doctrine. “Four days after the opening of the ratification convention in Philadelphia, on May 29, 1787, Edmund Randolph presented the Virginia Plan for creating a new government. This plan proposed a strong central government composed of three branches, legislative, executive, and judicial, and use force against states that failed to fulfill their duties.”

On May 31, James Madison, considered the “Father of the US Constitution” made a statement condemning Randolph’s proposal of using force against the States:

“The last clause of the sixth Resolution, authorizing an exertion of the force of the whole against a delinquent State, came next into consideration … that the more he reflected on the use of force, the more he doubted the practicability, the justice and the efficacy of it, when applied to people collectively, and not individually. An union of the States containing such an ingredient seemed to provide for its own destruction. The use of force against a State would look more like a declaration of war than an infliction of punishment; and would probably be considered by the party attacked as a dissolution of all previous compacts by which it might be bound.”

James Madison viewed the use of military force by the state’s agent, the general government, as an act of war against States and Robert Hunter reaffirmed Madison’s point of view in his speech.

SPECIAL NOTE: General John B. Gordon mentions riding with Secretary Hunter on his way down with the Raccoon Roughs on the same train traveling to Montgomery in his book entitled, “Reminiscences of the Civil War”.