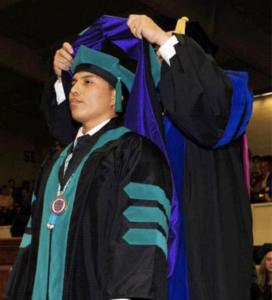 Dakota Kay, 26, receives his doctorate despite the odds. (Facebook/Dakota Kay)

Homelessness, cultural shock and being far from home would be enough to put a damper in anyone’s higher education plans, but this Navajo student was determined to complete his undergrad and graduate degrees against all odds.

Dakota Kay, a 26-year-old doctorate, told InsideEdition.com that he hopes his story encourages other young Native Americans to follow their dreams.

Kay explained that he grew up in the Navajo Nation in Kayenta, Arizona, and lived there his whole life, raised among his siblings and cousins.

“I was lucky enough to have both my parents, a sheltered house, running water, electricity and all that stuff,” he said. “My dad works every single day and my mom worked two jobs growing up.”

He said not many of his friends on the reservation went to college, and those who did usually don’t graduate. Even rarer are Native Americans completing graduate school, but Kay knew as a teen that he would complete his doctorate in physical therapy, and he worked hard to build the foundation for his future.

Kay pursued his bachelor’s degree at Fort Lewis College and applied for all the applicable scholarships and grants available to him. While he got his housing paid for during the school year, he needed to take classes in the summer to complete his program. He was not able to get any funding for a dorm or apartment during those months.

Kay said he didn’t want to take out any loans after growing up among people severely in debt, and he couldn’t ask his parents for money. So, he made the best of his situation.

For three summers while he was in college, he slept in the library, showered in various places around campus and, when he was lucky, he would be invited to stay at a friend’s for a few nights.

“I told them to just take me to school and drop me off at the library and I’ll go to my friend’s house from there,” he said. “They believed me. Luckily, the summer was warm so I didn’t have to worry about being cold.”

Kay eventually let it slip his senior year that he was homeless during the summers and said his parents were just happy he was able to survive.

“In my mind, it was a piece of cake,” he said. “My mom and dad, they never complained. My ancestors, they suffered for us and it’s nothing compared to what I was going through.”

The situation was tougher to manage when he left for his graduate degree at Southwest Baptist University in Missouri. Some of his scholarships fell through at the last minute and the small loan he took out would only cover tuition.

“I didn’t have enough money for housing, for food, for showers,” Kay said. “There was a point where I was so sad and I cried and I was totally lost. I didn’t know what to do.”

But he knew he had to push forward with his plan. He asked his parents to borrow the car so he could sleep in the backseat and asked his siblings for pointers on surviving the harsher Midwestern climate.

Kay found a spot in the Walmart parking lot he could safely sleep, and in the mornings, he would wake up, eat dried instant ramen he stock piled in his car, take a multivitamin and take a shower somewhere on campus before he went to class.

He spent most days at the library, sometimes sleeping on the desk and hoping campus security would assume he was just resting between study sessions.

Some days, he would shower at the local YMCA or have a hot meal at the homeless shelter.

“I wasn’t depressed. I wasn’t sad. I just had the mindset of doing what I had to do to succeed,” he said. “My dad’s stories of waking up in a hogan – it’s like a hut made of wood with mud on top – on sheep skin on a hard floor. My parents’ family and what they’ve been through. What I [was] going through now is nothing.”

While he intended to live out of his parent’s car for the next three years, an adviser that caught wind of his situation helped him out, and the university was able to set him up with a dorm room and free meals. 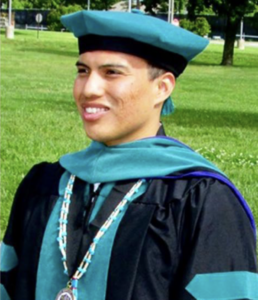 But there were other moments he fell back into a similar routine. When he did his clinical rotations and was sent to Dallas, Texas, he said he lived out of his car once again until a church agreed to house him.

“[My classmates] were always like, ‘Why don’t you ask your parents for money or take out more loans?’” Kay said. “It’s different. That culture shock.”

Despite the odds, he succeeded and graduated with his Doctorate degree in physical therapy. Kay, the oldest among his siblings aside from his twin, is now back home in the Navajo Nation, preparing for additional exams and applying for jobs in the Indian Health Service (IHS).

“I have a responsibility — not only to my nation, but to my family,” he said. “Life is always going to find a way. You’ve just got to keep your head up.”