He is revered as the man who freed US slaves, yet he never intended to do so and it was he who forced a war for the Union! 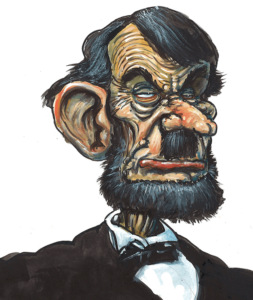 Today Abraham Lincoln remains America’s most popular president and its historians devote enormous efforts to ensuring that his reputation survives unscathed. Yet during his presidency he was hated by millions and in 1865 he was assassinated. Even before the Civil War he was loathed by perhaps a majority of his fellow countrymen and in the presidential election of 1860, 61 per cent of the electorate voted against him.

Rather than accept him as president, the South seceded from the Union. The Founding Fathers had indicated that secession was entirely legal. Lincoln should have taken the advice of the Supreme Court, but rather than that, he manipulated an attack on Fort Sumter to give him an excuse for war. Lincoln vetoed an attempted constitutional compromise and got his way by illegally organising a military invasion of Virginia. There, his troops were humiliated.

In July 1862, General Pope, his chief of staff, issued orders instructing the army to starve the South and treat civilians as enemies. General Sherman took full advantage of these, telling his wife from Georgia, that his policy would be one of “extermination . . . not of soldiers alone, but the people.” As a result, whole towns containing only old folk, women and children, were first stripped of all valuables and livestock, and then razed to the ground.

Native Americans also suffered under Lincoln. When the Sioux in Minnesota were starved into rebellion in 1862, General Pope was sent to deal with them with a plan “to utterly exterminate them.” Rebel Native Americans were given mock trials of about ten minutes each and Pope condemned 303 to hang. Lincoln approved 39 death sentences and gave Minnesota $2 million to clear the tribe from the state. Had the foreign press not been covering events, he would probably have hanged all 303. None the less, he had approved the largest public execution in US history. 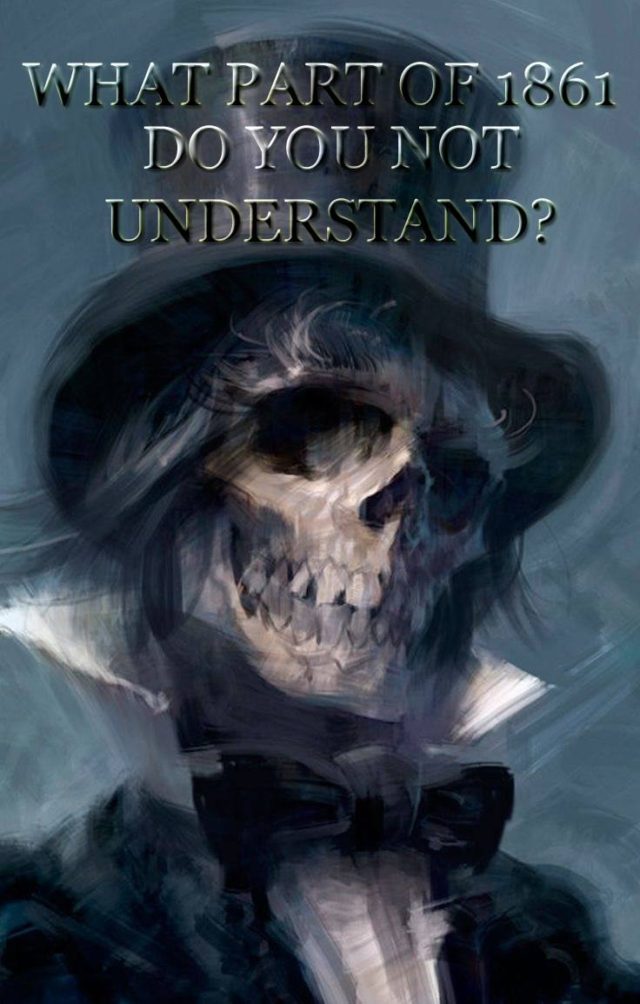 Lincoln had no liking for blacks either. His greatest desire was to send them all back to Africa or, failing that, to tropical Latin America. He put aside hundreds of thousands of dollars for this task. When, on 14 August 1862, he met the first delegation of blacks ever to enter the White House, he told them, “You and we are different races. We have between us a broader difference than exists between almost any other two races. Whether it is right or wrong I need not discuss but this physical difference is a great disadvantage to us both, as I think. Your race suffer very greatly, many of them, by living among us, while ours suffer from your presence. In a word we suffer on each side. If this is admitted it affords a reason why we should be separated.” He then told them to prepare to go to a new colony in the Caribbean.

Finally, he rationalised his policy of separating the races by blaming the Civil War on the blacks: “I need not recount to you the effects of white men, growing out of the institution of slavery. I believe in its general evil effects upon white men. See our present condition — the country engaged in war! — our white men cutting one another’s throats, none knowing how far it will extend; and then consider what we know to be the truth. But for your race among us there could not be war, although many men engaged on either side do not care for you in one way or the other. Nevertheless, I repeat, without the institution of slavery and the coloured race as a basis, the war could not have an existence.” He concluded, “It is better, therefore, for us to be separated.”

His views had originally been spelt out in 1858 in a famous debate with Stephen Douglas when he confessed, “I am not, nor have I ever been, in favour of bringing about in any way the social and political equality of the white and black races — and that I am not, nor ever have been, in favour of making voters or jurors of negroes, nor of qualifying them to hold office, nor to intermarry with white people and I say in addition to this that there is a physical difference between the white and black races which I believe will forever forbid the two races living together on terms of social and political equality. And insomuch as they cannot so live, while they remain together, there must be a position of superior and inferior and I as much as any man am in favour of having the superior position assigned to the white race.” He then offered one of his famous jokes, “I do not understand that because I do not want a Negro woman for a slave, I must necessarily want her for a wife.”

He eventually emancipated slaves because he was forced into it. Slaves began fleeing to Union lines during the war in their tens of thousands. The army needed them as soldiers and truly abolitionist Congressional radicals pressed for emancipation. Lincoln, of course, resisted, first by sacking Union generals who freed fugitive slaves and then by issuing a Preliminary Emancipation Proclamation which offered Southern slaveholders the chance to keep their slaves if they supported the Union. Slaveholders in the three pro-Union slave states could wait until 1900 to emancipate their slaves voluntarily. It was only when these moves failed that Lincoln emancipated all slaves on 1 January 1863. At this point 250,000 unionist troops deserted, 150,000 recruits evaded conscription and 90,000 fled to Canada. 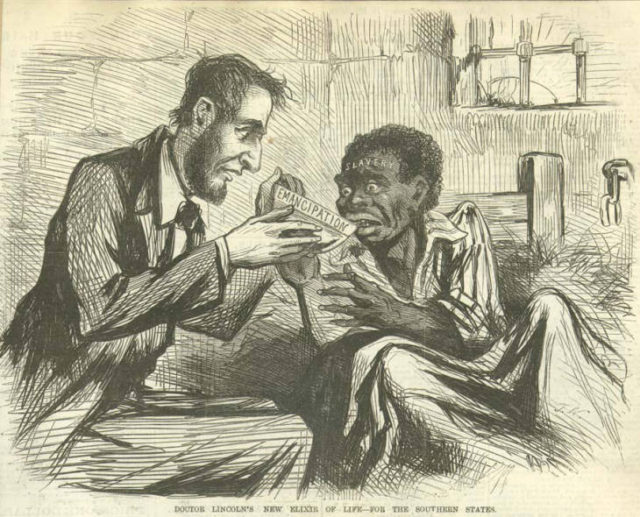 Doctor Lincoln’s New Elixir of Life – For the Southern States

By the end of the war, the question was whether to give all black men the vote. Lincoln again resisted, suggesting only highly educated blacks and black veterans might be given the vote. A few days after he stated this in a public speech he was assassinated.

Today he is revered as the man who freed the slaves and saved the Union. Yet he never intended to free America’s slaves and it was he who forced a war for the Union, since the South had never had any intention of attacking the North. Years before, he had written that the North could live in peace with an independent slave-owning Texas. So why not with a slave-owning Confederacy? Was it because he was now president and wanted to govern the whole US? Was his ego to blame for the war? Admirers of this “modest” man never ask this question but it should nonetheless be considered.

The Civil War was fought between two deeply racist societies who differed only over the fate of slavery. After 12 years of Reconstruction following his death, North and South agreed on a racist political system for the South which by the end of the century became the Solid South governed by Jim Crow laws. Blacks only began to experience equality after the civil rights movement of the 1960s. Lincoln’s role in their long journey to emancipation needs to be treated with great caution.

Written by Alan Sked for The Critic ~ January 2020