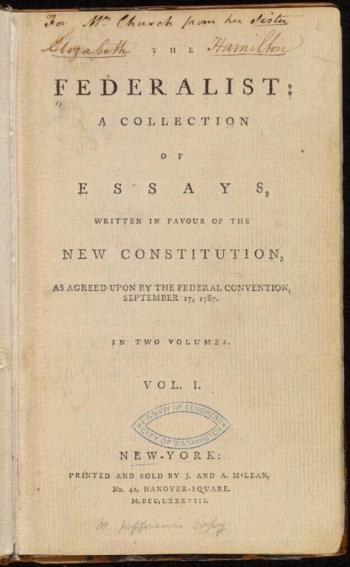 In order to have a good grasp on the founding of America, it is often said that one should read the Declaration of Independence, the U.S. Constitution, and the Federalist Papers.

It’s easy to see why the Declaration and the Constitution make the list of must-reads, but why the Federalist Papers?

According to Gregory Maggs, law professor at George Washington University Law School, the Federalist Papers should be read because they provide “an extremely important source of evidence of the original meaning of the Constitution.” Maggs goes on to say:

The five following quotes from the Federalist Papers will empower you to know and understand more about America’s Constitution and her form of government.

On Equality in Democracy…
“[D]emocracies have ever been spectacles of turbulence and contention; have ever been found incompatible with personal security or the rights of property; and have in general been as short in their lives as they have been violent in their deaths. Theoretic politicians, who have patronized this species of government, have erroneously supposed that by reducing mankind to a perfect equality in their political rights, they would, at the same time, be perfectly equalized and assimilated in their possessions, their opinions, and their passions.” – Federalist 10

The Powers Granted to the Federal Government…
“The powers delegated by the proposed Constitution to the Federal Government, are few and defined. Those which are to remain in the State Governments are numerous and indefinite. The former will be exercised principally on external objects, as war, peace, negociation [sic], and foreign commerce; with which last the power of taxation will for the most part be connected. The powers reserved to the several States will extend to all the objects, which, in the ordinary course of affairs, concern the lives, liberties and properties of the people; and the internal order, improvement, and prosperity of the State.” – Federalist 45

The Need for Separation of Powers…
“The accumulation of all powers, legislative, executive, and judiciary, in the same hands, whether of one, a few, or many, and whether hereditary, self-appointed, or elective, may justly be pronounced the very definition of tyranny.” – Federalist 47

Why Government is Necessary…
“If men were angels, no government would be necessary. If angels were to govern men, neither external nor internal controls on government would be necessary. In framing a government which is to be administered by men over men, the great difficulty lies in this: you must first enable the government to control the governed; and in the next place oblige it to control itself. A dependence on the people is, no doubt, the primary control on the government; but experience has taught mankind the necessity of auxiliary precautions.” – Federalist 51

The Role of the Court System…
“It can be of no weight to say that the courts, on the pretense of a repugnancy, may substitute their own pleasure to the constitutional intentions of the legislature. This might as well happen in the case of two contradictory statutes; or it might as well happen in every adjudication upon any single statute. The courts must declare the sense of the law; and if they should be disposed to exercise WILL instead of JUDGMENT, the consequence would equally be the substitution of their pleasure to that of the legislative body.” – Federalist 78

Written by Annie Holmquist and published by Intellectual Takeout ~ September 9, 2015