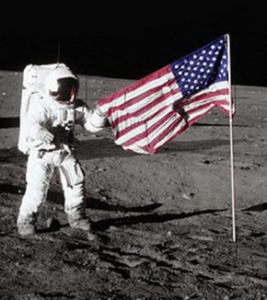 Fifty years ago today, I was home on leave from my first tour of the Garden of Eden – Viet Nam – and was staying with my Aunt Muffin and her then husband Chuck in North Hollywood, California. What you are about to watch is what I watched that day, as many millions of us did. ~ Ed.

Armstrong put an American flag on the Moon.

Last week, Apollo 11 and Apollo 13 flight director Gene Kranz praised the Trump administration’s handling of NASA, saying that “it’s great to again have the inspiration that we’re getting moving again in space.” Trump has pledged to return Americans to the Moon by 2024. In 2010, former President Barack Obama canceled NASA’s plan to return to the moon by 2020, as established under former President George W. Bush.

This historic news coverage includes an anti-smoking ad and a Miss Universe 1969 commercial at the 1 hour, 19-minute mark.