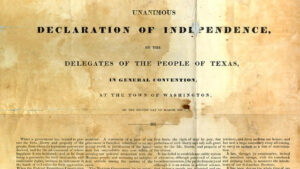 On March 2, 1836, Texas formally declared its independence from Mexico. The Texas Declaration of Independence was signed at Washington-on-the-Brazos, now commonly referred to as the “birthplace of Texas.” Similar to the United States Declaration of Independence, this document focused on the rights of citizens to “life” and “liberty” but with an emphasis on the “property of the citizen.”

The Texas Declaration of Independence was issued during a revolution against the Mexican government that began in October 1835 following a series of government edicts including dissolution of state legislatures, disarmament of state militias, and abolition of the Constitution of 1824.

By December 1835, Texans (Anglo-American settlers) and Tejanos (Texans of mixed Mexican and Indian descent) captured the town of San Antonio. Two months later, on February 23, 1836, Mexican troops under General Antonio López de Santa Anna arrived in San Antonio to retake the city. Although Sam Houston ordered Texans to abandon San Antonio, a group of rebels decided to defend the town and make their stand at an abandoned Spanish mission, the Alamo.

For twelve days, Mexican forces laid siege to the Alamo. On March 6, four days after Texas declared independence, Mexican troops scaled the mission’s walls; 183 defenders were killed, including several Mexicans who had fought for Texas independence, and their oil-soaked bodies were set on fire outside the Alamo. The Republic of Texas won its independence on April 21, 1836, with a final battle along the San Jacinto River. 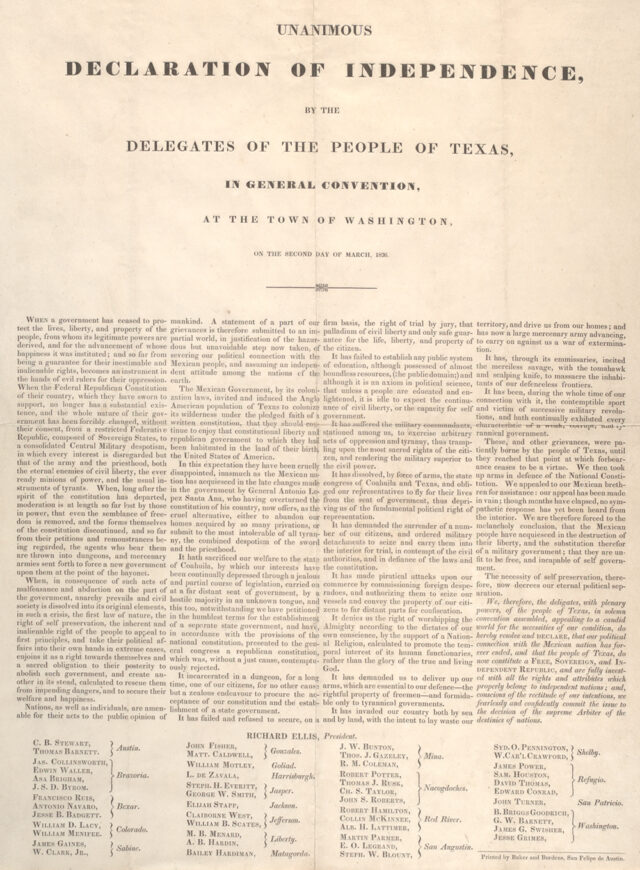