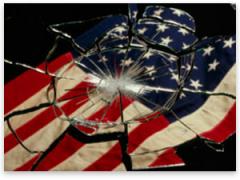 Accurate history is the first causality in any establishment account of events and their significance. When the fundamental chronicles of national heritage is purged and supplanted with a total reversal of the nature of America’s essence, the public is browbeaten into adopting a phony and destructive departure from traditional values and purpose. The intense disparaging of the America First Committee and their vigorous defense of the Originalist Perspective for a non-interventionist foreign policy was a profound departure from constitutional restraint and limited Presidential authority.

The imperial tyranny Franklin “Demigod” Roosevelt schemed for years to break the honored tradition going back to Washington and Adams of avoiding entangling alliances. He and his Marxist friends were so eager to expand the power of the Presidency and to enlarge their collectivist grip on society that involving the country in another foreign war became a cause of grandness obsession.

The popular tactic used by the empire builders for this internationalist outreach imperium and hegemony concentrated on defaming the America First Committee. Securing the true story behind this organization of the non-interventionists, who wanted to avoid the same mistakes that bullied the United States into the First World War, has become a hidden secret when searching the web.

A fair summary of leading spokesman and champion of the very spirit of America First comes from Wayne S. Cole’s writings on Charles A. Lindbergh and the Battle Against American Intervention in World War II which appears on Charles Lindbergh’s Noninterventionist Efforts & America First Committee Involvement.

“Drawing on his experiences and observations during four or five years abroad (1935-1939) in Europe, Asia, Africa, and Latin America, Charles Lindbergh provided Americans with a portrait of the European war that differed substantially from the one conceived by the Roosevelt administration and by so-called interventionists in the United States. He did not see the conflict as basically a war for democracy or morality. He was skeptical of the ideology and moral righteousness of the British and French. He conceived of morality in international affairs as relative to time, place, circumstances, and power. His approach was, in effect, more understanding of the Germans (without approving of what they did) and more skeptical of the Allies than the conventional view in the United States. Lindbergh saw a divided responsibility for the origins of the European war, rather than an assignment of the total blame to Hitler, Nazi Germany, and the Axis states. He did not view Germany, Britain, and France as implacable foes with irreconcilable differences that could be resolved only by war; he saw them all as parts of Western civilization. And he conceived of the European war as a fratricidal struggle (like the wars between Athens and Sparta in ancient Greece) that could destroy Western civilization. Conceptions of race were conspicuous in his analyses, as were his concerns about the challenge of Asiatic hordes to the survival of Western civilization. Like later American “realists,” Colonel Lindbergh attached great weight to the role of power in international relations and in prevailing definitions of morality.”

Watch this video; Charles Lindbergh Stands for America First and Against Militarism, Interventionism.

While Lindbergh was the most visual advocate of the America First movement, one of the most perceptive and well documented accounts is written by the inimitable Justin Raimondo, when it comes to analyzing the Old Right. His essay, THEY FOUGHT THE GOOD FIGHT describes The Legacy of the America First Committee. Read this entire article for indispensible information about the real history leading up to the FDR plotted manipulation of getting the public set up to enthusiastically support a war as revenge for Pearl Harbor.

“The America First Committee was the response of a disparate coalition to the propaganda blitz – and the apparent desire of the American President to get us out of the depression by getting us into the war. The committee was founded on September 4, 1940, a mere 15 months before the Japanese attack on Pearl Harbor. The AFC grew out of a student antiwar organization, led by R. Douglas Stuart, Jr., son of the first vice president of the Quaker Oats Company. After linking up with general Robert E. Wood, chairman of the board of Sears, Roebuck & Co., the AFC went national, set up a Chicago headquarters, and began running newspaper ads attacking the warmongering policies of the Administration. With a speakers bureau, a variety of publications, local chapters, and rallies in cities and towns all across America, the AFC eventually grew to 850,000 dues-paying members organized in 450 chapters.

It was a grand coalition, encompassing conservative Republicans, such as William R. Castle, Undersecretary of State in the Hoover administration, the liberal Chester Bowles, and the populist progressive Senators Philip La Follette and Burton K. Wheeler, and the Socialist Norman Thomas.”

The significance of a broad base alliance of varied and often competing ideological viewpoints around the central issue of avoiding involvement into a foreign war in Europe was completely consistent with Washington’s Farewell Address 1796. Without the intentional fostering of Japanese militarism with the U.S. embargo on oil and the stand down against the attack on the Hawaiian Islands, the FDR objective to endure a first strike transcends into outright treason.

Absent of this dramatic betrayal, the America First Committee would have inspired more citizens to defy any engagement into a European conflict.

The objective and rational articulation of the America First position was clearly stated by Charles Lindbergh when he spoke to a Manhattan rally, laying out the America First take on the global situation. Even Time magazine covered this historic speech.

“[The America First policy] is based upon the belief that the security of a nation lies in the strength and character of its own people. It recommends the maintenance of armed forces sufficient to defend this hemisphere from attack by any combination of foreign powers. It demands faith in an independent American destiny. This is the policy of the America First Committee today. It is a policy not of isolation, but of independence; not of defeat, but of courage. It is a policy that led this nation to success during the most trying years of our history, and it is a policy that will lead us to success again. We have weakened ourselves for many months, and still worse, we have divided our own people by this dabbling in Europe’s wars. While we should have been concentrating on American defense we have been forced to argue over foreign quarrels. We must turn our eyes and our faith back to our own country before it is too late.”

So when The Lone Eagle argued his case that We Cannot Win This War for England, WE ARE WEAKENING OUR DEFENSE POSITION, in his April 23, 1941 appeal, he was reflecting the time-honored sentiment of America.

While documenting the debate over foreign policy is much easier than convincing illiterate and apathetic people, who pride themselves on knowing no real history much less understanding the motivation for the American Empire.

The essay Democratic Socialists vs. America First Populists, explores many of the destructive consequences that followed the cataclysmic involvement in WW II that transformed our country into a centralized collectivist nightmare and tyranny that masquerades as a legitimate government.

In order to interpret the aftermaths of ignoring the prudent warning of the America First Committee, the evaluation of The Military-Industrial Complex in the United States: Evolution and Expansion from World War II to the War on Terror, needs to be incorporated into the pre WW II admonitions.

“This analysis argues that expansion of the U.S. military establishment from the 1940s onward was initially a means to an end in the process of stabilizing the world economy and serving national security interests, but — over time — became an end in itself, serving the interests of an elite group that uses the projection of power as a way to justify the continued expansion of military spending. This essay is divided into two sections: the first focuses on the origins of America’s military-industrial.”

However, the fallacious axiom that “stabilizing the world economy and serving national security interests” is achieved by a Pax-America with worldwide garrisons and perpetual interventions is a direct result of the abandonment of a genuine America First position and strategy to operate in the true national interest.

If the America First Committee viewpoint was adopted, the disasters of Viet Nam and Iraq would never have happened. If Nazi Germany was left to eradicate Communism, the Soviet Union would have been eliminated, which was the literal existential threat to humanity. Those Anglophiles, who followed Churchill to exterminate “The Hun” were dead wrong. That task was for Stalin to pursue. The honest outlook is that America lost World War II by winning the pyrrhic victory.

The principles of the American Revolution were surrendered by fighting foreign wars. By adopting a soviet model as a substitute for a genuine republic, the government of the United States has become the evil empire. How ironic, Putin now operates more like a statesman, while Germany is being overrun by hordes of non Europeans, and what is left of America, is run by Marxists comrades.

Submitted for publication to Kettle Moraine Publications by the author.

~ The Author ~
Kettle Moraine Publications contributor, SARTRE is the pen name of a reformed, former political operative. This pundit’s formal instruction in History, Philosophy, and Political Science served as training for activism, on the staff of several politicians and in many campaigns. We invite you to visit his website at: Breaking All The Rules.