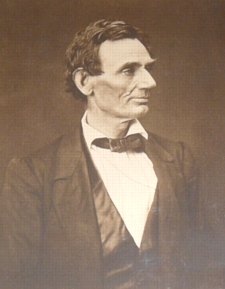 Although Jackson killed the central bank, fractional reserve banking remained in use by the numerous state chartered banks. This fueled economic instability in the years before the civil war. Still, the central bankers were out, and as a result American thrived as it expanded westward. The central bankers struggled to regain power of the bank, but to no avail. Finally, they reverted to the old central banker’s formula of war to create debt and dependency. If they couldn’t get their bank any other way, America could be brought to its knees by plunging it into a civil war, just as they had done in 1812, after, The First Bank of the U.S. was not rechartered.

One month after the inauguration of Abraham Lincoln, the first shots of the Civil War was fired at Fort Sumter South Carolina. This occurred on April 12th, 1861. Americans have always been taught that slavery was the cause of the Civil War. This is true in part, but slavery was U the primary cause.

Lincoln knew that the economy of the southern states was dependent upon slavery. Before the Civil War, Lincoln had no intention of eliminating it. Lincoln addressed slavery in his inaugural address, “I have no purpose, directly or indirectly to interfere with the institution of slavery in the states where it now exists. I believe I have no lawful right to do so, and I have no inclination to do so.”

Lincoln continued to insist that the Civil War was not about the issue of slavery. “My paramount objective is to save the union, and it is not either to save or destroy slavery. If I could save the union without freeing any slave, I would do it.”

Northern protectionists were using their influence to prevent the southern states from purchasing cheaper goods, and European nations began to boycott cotton imports from the south. The southern states were in a double financial bind. They were forced to pay higher prices for the necessities of life, while their cotton exports plummeted. But there were other factors at work. The money changers were still infuriated that they had no control over America’s central bank. America’s “wildcat” economy had made the nation rich since the money changers lost control only twenty-five years earlier. The central bankers would then use the division between the northern, and southern states as an opportunity to split this rich new nation, and to gain control of the central bank again. The banker’s intention was to divide, and conquer the nation through war, which they would finance.

Otto Von Bismarck, the Chancellor of Germany, who united the German states said, “The division of the United States into federations of equal force was decided long before the Civil War by the high financial powers of Europe. These bankers were afraid that the United States, if they remained as one block, and as one nation, would attain economic and financial independence, which would upset their financial domination over the world.”

Within months after the first shots at Fort Sumter, the central bankers loaned the nephew of Napoleon, Napoleon III of France, 210 million francs to seize Mexico, and station troops along the southern border of the U.S., taking advantage of the states war in violation of, The Monroe Doctrine. This was an attempt to return Mexico to colonial rule.

No matter what the outcome of the Civil War, a weakened America, heavily indebted to the central, and international bankers, would open up Central, and South America to European colonization, and domination. This was the very thing that, The Monroe Doctrine had intended to prevent when it was enacted in 1823. During this same period, Britain moved 17,000 troops into Canada, and positioned them menacingly on the U.S. northern border. The British fleet went on war alert, should their quick intervention be called for.

Lincoln was in a double bind, and agonized over the fate of the union. There was a lot more to the war, than the differences between the northern and southern states. That was why Lincoln’s emphasis was always on preservation of the union, and not merely the defeat of the south.

Wars cost money, and Lincoln needed money to win, and in 1861, Lincoln, and his secretary of treasury Solomon P. Chase, went to New York to apply for the necessary loans. The money changers anxious to see the union fail, offered loans at 36% interest. Lincoln refused to accept those rates, and returned to Washington. Lincoln turned to an old friend, Colonel Dick Taylor of Chicago and placed him on the issue of obtaining the finances that were necessary for the war. During that meeting Taylor told Lincoln, “Just get congress to pass a bill authorizing the printing of full legal tender treasury notes, and pay your soldiers with them, and go ahead, and win your war with them also.” Lincoln asked if the people of the U.S. would accept the notes, Taylor said, “The people or anyone else will not have any choice in the matter, if you make them full legal tender. They will have the full sanction of the government and be just as good as any money; as congress is given that express right by the Constitution.” Between 1862-1863, Lincoln printed 400 million dollars in new bills. In order to distinguish them from other bank notes in circulation Lincoln’s bills were printed in green ink on the back side. Thus, the notes became known as green backs. With this new money, Lincoln paid the troops, and bought their supplies.

During the course of the war nearly 450 million dollars in green backs were printed at no interest to the federal government. Lincoln explained his rationale, “The Government should create, issues and circulate all of the credit needed to satisfy the spending power of the government, and the buying power of the consumers. The privilege of creating and issuing money is not only the supreme prerogative of government, but is the government’s greatest creative opportunity. By the adoption of these principles, the taxpayers will be saved immense sums of interest. Money will cease to be the master, and become the servant of humanity.”

An editorial in the London Times explained the banker’s attitude toward the greenbacks. “If this mischievous financial policy, which has its origin in North America, shall become underrated down to a fixture, then that government will furnish its own money without cost. It will pay off debts, and be without debt. It will have all the money necessary to carry on its commerce. It will become prosperous without precedent in the history of the world. The brains, and wealth of all countries will go to North America. That country must be destroyed, or it will destroy every monarchy on the globe.”

The scheme was so effective that in 1863, federal, and confederate troops began to mass for the decisive battle of the Civil War. The treasury was in need of further authority to issue more green backs. Lincoln allowed the bankers to push through the National Bank Act. These new banks would operate under a tax-free status, and collectively have exclusive monopoly power to create the new form of money, bank notes. Though green backs continued to circulate, there numbers were not increased. Most importantly, the entire U.S. money supply would be created out of debt where bankers would be buying U.S. government bonds, and issuing them for reserves for bank notes. John Kenneth Galbraith wrote, “In numerous years following the war, the federal government ran a heavy surplus. It could not however, pay off its debt, retire its securities, because to do so meant there would be no bonds to back the national bank notes. To pay off the debt was to destroy the money supply.”

Later in 1863, Lincoln received unexpected help from Czar Alexander II of Russia. The Czar, like Bismarck in Germany knew what the international money changers were up to. Alexander II, steadfastly refused to allow international bankers to set up a central bank in Russia. If America survived, and was able to remain out of the crutches of the bankers, the Czar’s position would remain secure. If the bankers were successful in dividing America, and giving the pieces back to Britain and France, and both nations back to the control of the central banks, eventually they would threaten Russian again. So, the Czar gave orders that if either Britain or France, actively intervened by giving aid to the South, Russia would consider such action a declaration of war. Alexander II then sent part of his naval fleet to port in San Francisco.

Lincoln was reelected the following year in 1864. Had he lived he would have eliminated the national banks money monopoly, extracted from him during the Civil War. In November of 1864, Lincoln wrote a friend the following note, “The money power preys upon the nation in times of peace and conspires against it in times of adversity. It is more despotic than monarchy, more insolent than autocracy, more selfish than bureaucracy.” Shortly before Lincoln was murdered, his former secretary Salmon P. Chase, bemoaned his role in helping secure the passage of the National Banking Act. “My agency, in promoting the passage of the National Banking Act, was the greatest financial mistake in my life. It has built up a monopoly which affects every interest in the country.”

On April 14th, 1865, just forty-one days after Lincoln’s second inauguration, and just five days after Lee surrendered to Grant, Lincoln was shot by John Wilkes Booth at Ford’s Theater. Otto Van Bismarck, the Chancellor of Germany lamented the death of Abraham Lincoln, “The death of Lincoln was a disaster for Christendom. There was no man in the United States great enough to wear his boots. I fear that foreign bankers with their craftiness, and tortuous tricks will entirely control the exuberant riches of America, and use it systematically to corrupt modern civilization. They will not hesitate to plunge the whole of Christendom into wars, and chaos, in order that the earth should become their inheritance.” Bismarck understood the bankers plan, and that the international bankers were responsible for Lincoln’s assassination, which finally surfaced seventy years later, in 1934. (SOURCE)