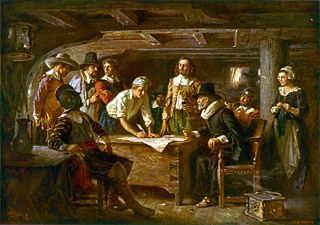 CAPE COD, 1620 ~ A group of fundamentalist religious immigrants from Europe joined together today on a tiny ship called the Mayflower harbored in Cape Cod. Their purpose was to sign an agreement before establishing a religious settlement in the area to be called Massachusetts. According to inside sources, the manifesto declares their intentions to use the settlement as a base for increasing their religious sect in the New World.

The band of 103 immigrants left Holland a few months ago, and endured treacherous storms during their travels. They came to North America for freedom to practice their religion.

The religious group’s radical leader, William Brewster, led the group in signing the agreement with each other. Another leader, William Bradford, inside sources say, may be drafted to run for mayor of the fundamentalist Christian settlement.

The Illinois Leader obtained access to the document, now referred to as the Mayflower Compact, revealing the radical agenda of the extremist fringe group called “Pilgrims”:

In the name of God, Amen.

We whose names are underwritten, the loyal subjects of our dread sovereign lord, King James, by the grace of God, of Great Britain, France, and Ireland King, Defender of the Faith, etc.

Having undertaken, for the glory of God, and advancement of the Christian faith, and honor of our King and Country, a voyage to plan the first colony in the northern parts of Virginia, do by these presents solemnly and mutually, in the presence of God, and one of another, covenant and combine our selves together into a civil body politic, for our better ordering and preservation and furtherance of the ends aforesaid; and by virtue hereof to enact, constitute, and frame such just and equal laws, ordinances, acts, constitutions and offices, from time to time, as shall be thought most meet and convenient for the general good of the Colony, unto which we promise all due submission and obedience.

In witness whereof we have hereunder subscribed our names at Cape Cod, the eleventh of November, in the year of the reign of our sovereign lord, King James, of England, France, and Ireland, the eighteenth, and of Scotland the fifty-fourth. Anno Dom. 1620. 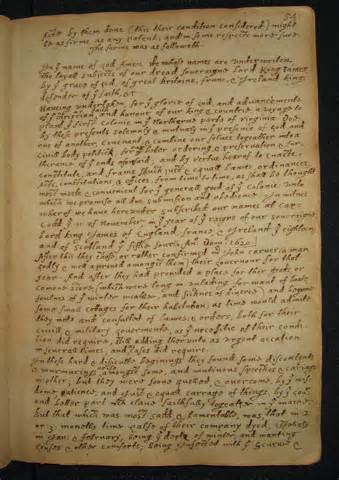 The Mayflower Compact was the first governing document of Plymouth Colony. It was written by the male passengers of the Mayflower, consisting of separatist Congregationalists who called themselves “Saints“, and adventurers and tradesmen, most of whom were referred to by the Separatists as “Strangers“. Observers say that with the time of year and the inclimate weather of the area the Pilgrims chose for their settlement, chances of the Pilgrims successfully establishing a religious colony are very slim.