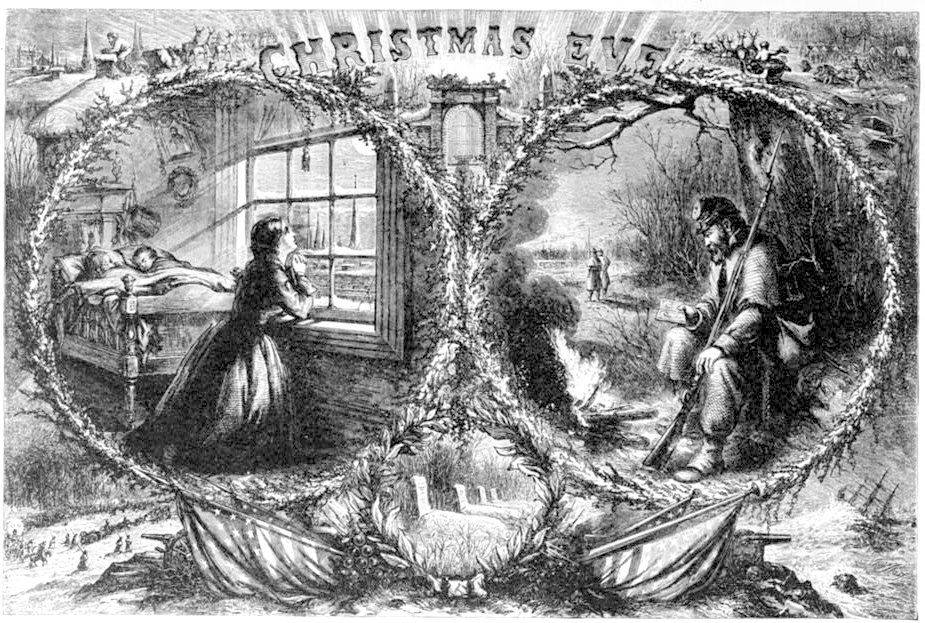 Following the stunning Confederate victory at the Battle of Balls Bluff on October 21, 1861, Leesburg welcomed a host of Southern soldiers. Young men from near and far wintered near the Northern Virginia town, and it was the first Christmas away from home for many. Families across the Heritage area were already separated by the Civil War, and darker days lay ahead. The holidays blanketed the area with cheer, even though the weather was warm and clear. Thomas E. Caffey, an Englishman, signed up with Co. D, the “Hamer Rifles”, 18th Miss., and had this to say about the regiment’s Christmas celebrated in their winter quarters at Morven Park:

While I now write, preparations are going on for ‘winter quarters,’ and the sounds of axes and falling timber are resounding through the woods on every hand. Game cocks tied to the tent by one leg, are crowing defiantly in all directions – chicken-fights are progressing in every sunny spot, while violins and circles of dancers are scattered in every warm and dry location, while others roar out bachanalian and war-like strains from every tent. It is Christmas! Far away from friends and home, these brave and simple-hearted volunteers make the welkin ring with their boisterous mirth – huge logs are crackling and roaring on camp fires – pots are boiling and bubbling, and hissing for egg-nog, beef and pork are frying, and bread is baking – the regimental band has been imbibing, and is now playing away with great gusto, while some have formed setts for quadrilles to be danced by the fire light.

It is Christmas! Groups are reading the newspapers and deciding the fate and progress of the war, officers and men are hobnobbing over the social glass; negroes are busy and gaseous over a pyramid of pots and pans, while the ear-splitting laughter and incessant rolling of eyes gives positive assurance that they have made acquaintance with something stronger than water. Boxes, bales, and trunks, and parcels have come from ‘home’ – coats, and blankets, and boots, and hats are hawked about, and swapped, and sold, and tossed about, while long letters from the ‘Governor,’ and short ones from ‘sweethearts’ are read, and praised, and laughed at, while ‘payday’ coming on the morrow, cheers are given for the quartermaster, and stentorian groans for the inartistic or tardy cash.

It is Christmas! Friends with mysterious bundles and parcels, hid under the coat, arrive from town, and dive therewith into the depth and recesses of the tent, and hide them under the straw – friends with turkeys and fowl, and a hundred other things, meet together and do hungry justice to the same, while songs and stories go the rounds of tents and camps, and everybody laughs, and everybody is ‘jolly’ except the poor and unfortunate frost-covered sentinel, who, with muffled form and a very red nose, walks his lonely rounds and grins at what he cannot then enjoy.

It is Christmas time, and even the lean, lank, solemn looking parson unbends in dignity for the occasion, and while forming one of a circle round the blazing logs, cup in hand, essays to joke, but being ‘coughed down’ for the attempt, winks ominously at the egg-nog, and apostrophises largely on the vanity of things generally. The colonel too, and the lieutenant, and the shrill-toned, brisk and soldierly adjutant smoke their Havanas on the portico of ‘headquarters’ with solemn dignity, while the French band-master electrifies a knot of youngsters with all sorts of ‘impossibilities’ on the trombone.

It is Christmas time, and coming but once a year none care for expenses. Yankees are the last persons thought of – cock-fighting and egg-nog, and egg-nog and cock-fighting interspersed with songs and egg-nog and story-telling are the prime order of things just now, and despite all the parson says, and nothwithstanding the ‘starchiness’ of full-blown officials, rye and ‘egg fruit’ are decidedly in the ascendant, and more than that has no baneful effect, since it simply lends to revive old associations and strengthen those bonds of brotherhood which has indissolubly linked us for ever to the fortunes of our country.

–  From a letter published by The Memphis Daily Appeal, January 7, 1862