“You have got our country …you want to force your religion upon us.” 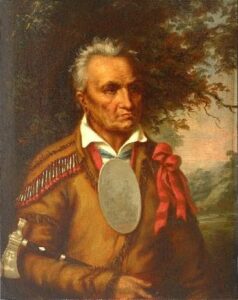 SENECA, N.Y., 1805 – Red Jacket Chief, of the Seneca Tribe and dominant spokesman for the Six Nations, eloquently challenged the ablest spokesmen among the Christian missionaries in an address here, replying to appeals to the Indians to be baptized and thereby take one more step toward integration into the American community.

To the surprise of these spokesmen for the Christian church, the eloquent warrior and friend of the late General George Washington, told the junior race that in his view the Indians have a better religion and one with less division than the white man. For good measure, using quotations that might I well have been taken from the Bible itself, he cited actions by the white man in encroachment upon Indian rights, in self-divisions over doctrine and in other matters, that constituted an indictment comparable with those spoken in earlier days by the great Reform leaders within the church itself.

For these reasons, as well as the simplicity of expression used by this warrior of warriors-whose name itself came from the wearing of a scarlet coat given to him long ago by British troops – his words are memorable. In his own language his given name is far more euphonious, being Otetiani, and his title as chieftain even more picturesque – Sagoyewatha. But as Red Jacket he must be known to posterity.

Friend and brother; it was the will of the Great Spirit that we should meet together this day. He orders all things, and he has given us a fine day for our council. He has taken his garment from before the sun, and caused it to shine with brightness upon us; our eyes are opened, that we see clearly; our ears are unstopped, that we have been able to hear distinctly the words that you have spoken; for all these favors we thank the Great Spirit, and him only.

Brother, this council fire was kindled by you; it was at your request that we came together at this time; we have listened with attention to what you have said. You requested us to speak our minds freely; this gives us great joy, for we now consider that we stand upright before you, and can speak what we think; all have heard your voice, and all speak to you as one man; our minds are agreed.

Brother, you say you want an answer to your talk before you leave this place. It is right you should have one, as you are a great distance from home, and we do not wish to detain you; but we will first look back a little, and tell you what our fathers have told us, and what we have heard from the white people.

Brother, listen to what we say. There was a time when our forefathers owned this great island. Their seats extended from the rising to the setting sun. The Great Spirit had made it for the use of Indians. He had created the buffalo, the deer, and other animals for food. He made the bear and the beaver, and their skins served us for clothing. He had scattered them over the country, and taught us how to take them. He had caused the earth to produce corn for bread. All this he had done for his red children because he loved them. If we had any disputes about hunting grounds, they were generally settled without the shedding of much blood. But an evil day came upon us; your forefathers crossed the great waters, and landed on this island. Their numbers were small; they found friends, and not enemies; they told us they had fled from their own country for fear of wicked men, and come here to enjoy their religion. They asked for a small seat; we took pity on them, granted their request, and they sat down amongst us; we gave them corn and meat; they gave us poison in return. The white people had now found our country; tidings were carried back, and more came amongst us; yet we did not fear them, we took them to be friends; they called us brothers; we believed them, and gave them a larger seat. At length, their numbers had greatly increased; they wanted more land; they wanted our country. Our eyes were opened, and our minds became uneasy. Wars took place; Indians were hired to fight against Indians, and many of our people were destroyed. They also brought strong liquor among us; it was strong and powerful, and has slain thousands.

Brother, our seats were once large, and yours were very small; you have now become a great people, and we have scarcely a place left to spread our blankets; you have got our country, but are not satisfied; you want to force your religion upon us.

Brother, continue to listen. You say you are sent to instruct us how to worship the Great Spirit agreeably to his mind, and if we do not take hold of the religion which you white people teach, we shall be unhappy hereafter. You say that you are right, and we are lost; how do we know this to be true? We understand that your religion is written in a book; if it was intended for us as well as you, why has not the Great Spirit given it to us, and not only to us, but why did he not give to our forefathers the knowledge of that book, with the means of understanding it rightly? We only know what you tell us about it. How shall we know when to believe, being so often deceived by the white people?

Brother, you say there is but one way to worship and serve the Great Spirit; if there is but one religion, why do you white people differ so much about it? Why not all agree, as you can all read the book?

Brother, we do not understand these things. We are told that your religion was given to your forefathers, and has been handed down from father to son. We also have a religion which was given to our forefathers, and has been handed down to us their children. We worship that way. It teacheth us to be thankful for all the favors we receive; to love each other, and to be united. We never quarrel about religion.

Brother, the Great Spirit has made us all; but he has made a great difference between his white and red children; he has given us a different complexion, and different customs; to you he has given the arts; to these he has not opened our eyes; we know these things to be true. Since he has made so great a difference between us in other things, why may we not conclude that he has given us a different religion according to our understanding. The Great Spirit does right; he knows what is best for his children; we are satisfied.

Brother, we do not wish to destroy your religion, or take it from you; we only want to enjoy our own.

Brother, you say you have not come to get our land or our money, but to enlighten our minds. I will now tell you that I have been at your meetings, and saw you collecting money from the meeting. I cannot tell what this money was intended for, but suppose it was for your minister; and if we should conform to your way of thinking, perhaps you may want some from us.

Brother, we are told that you have been preaching to the white people in this place. These people are our neighbors; we are acquainted with them; we will wait, a little while and see what effect your preaching has upon them. If we find it does them good, makes them honest and less disposed to cheat Indians, we will then consider again what you have said.

Brother, you have now heard our answer to your talk, and this is all we have to say at present. As we are going to part, we will come and take you by the hand, and hope the Great Spirit will protect you on your journey, and return you safe to your friends.

~ HiStory ~
The Senecas, members of the Iroquois Confederacy, fought on the side of the British in the American Revolution. Red Jacket, also known as Sagu-Ya-What-Hath, was a chief and orator born in eastern New York; he derived his English name from his habit of wearing many red coats provided to him by his British allies. After the hostilities, as the British ceded their territories to the Americans, the Senecas and many other Indian peoples faced enormous pressure on their homelands. Red Jacket was a critical mediator in relations between the new U.S. government and the Senecas; he led a delegation that met with George Washington in 1792, when he received a peace medal that appeared in subsequent portraits of the Indian leader. In 1805 a Boston missionary society requested Red Jacket’s permission to proselytize among the Iroquois settlements in northern New York State. Red Jacket’s forceful defense of native religion, above, caused the representative to refuse the Indian’s handshake and announce that no fellowship could exist between the religion of God and the works of the Devil. 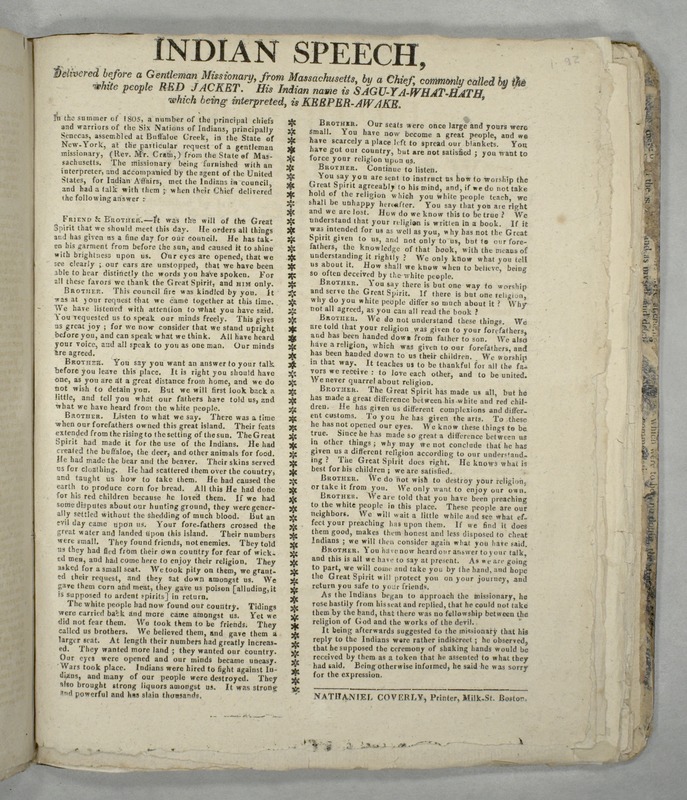