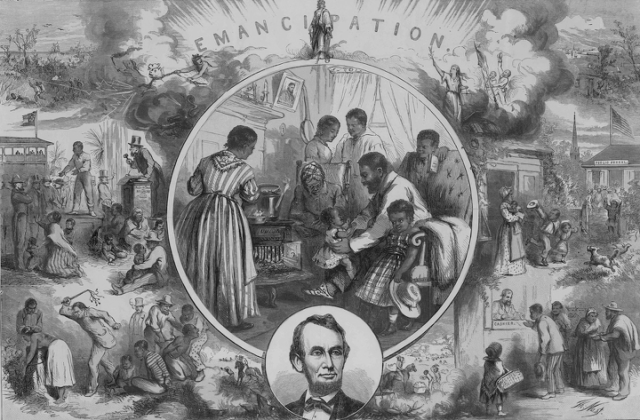 January 1, 1863 – President Abraham Lincoln issued the Emancipation Proclamation, as the nation approached its third year of bloody civil war. The proclamation declared “that all persons held as slaves” within the rebellious states “are, and henceforward shall be free.”

Despite this expansive wording, the Emancipation Proclamation was limited in many ways. It applied only to states that had seceded from the Union, leaving slavery untouched in the loyal border states. It also expressly exempted parts of the Confederacy that had already come under Northern control. Most important, the freedom it promised depended upon Union military victory.

Although the Emancipation Proclamation did not end slavery in the nation, it captured the hearts and imagination of millions of Americans and fundamentally transformed the character of the war. After January 1, 1863, every advance of federal troops expanded the domain of freedom. Moreover, the Proclamation announced the acceptance of black men into the Union Army and Navy, enabling the liberated to become liberators. By the end of the war, almost 200,000 black soldiers and sailors had fought for the Union and freedom.

From the first days of the Civil War, slaves had acted to secure their own liberty. The Emancipation Proclamation confirmed their insistence that the war for the Union must become a war for freedom. It added moral force to the Union cause and strengthened the Union both militarily and politically. As a milestone along the road to slavery’s final destruction, the Emancipation Proclamation has assumed a place among the great documents of human freedom.

by the President of the United States of America: 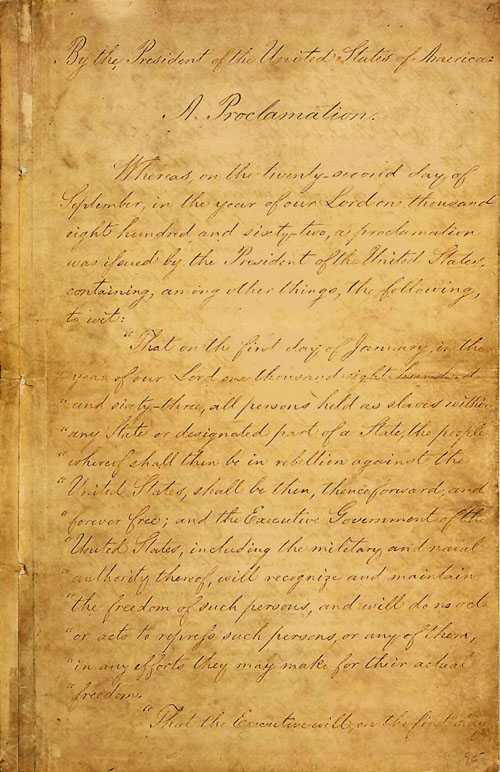 A Proclamation
Whereas, on the twenty-second day of September, in the year of our Lord one thousand eight hundred and sixty-two, a proclamation was issued by the President of the United States, containing, among other things, the following, to wit:

“That on the first day of January, in the year of our Lord one thousand eight hundred and sixty-three, all persons held as slaves within any State or designated part of a State, the people whereof shall then be in rebellion against the United States, shall be then, thenceforward, and forever free; and the Executive Government of the United States, including the military and naval authority thereof, will recognize and maintain the freedom of such persons, and will do no act or acts to repress such persons, or any of them, in any efforts they may make for their actual freedom. 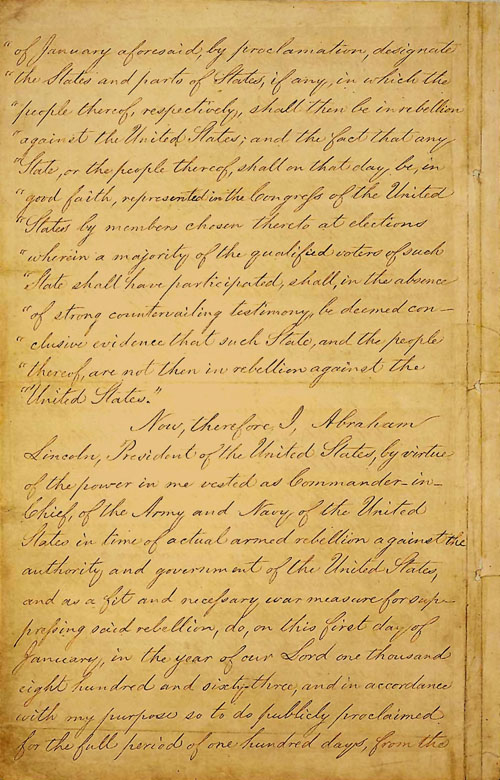 “That the Executive will, on the first day of January aforesaid, by proclamation, designate the States and parts of States, if any, in which the people thereof, respectively, shall then be in rebellion against the United States; and the fact that any State, or the people there of, shall on that day be, in good faith, represented in the Congress of the United States by members chosen thereto at elections wherein a majority of the qualified voters of such State shall have participated, shall, in the absence of strong countervailing testimony, be deemed conclusive evidence that such State, and the people thereof, are not then in rebellion against the United States.” 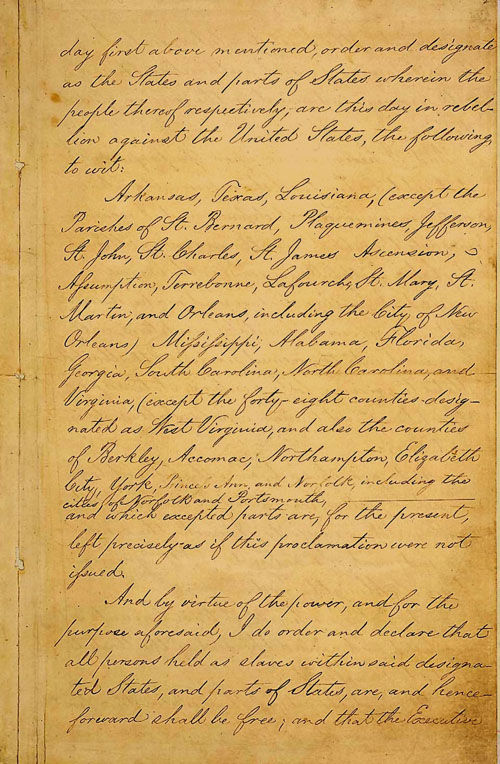 Arkansas, Texas, Louisiana, (except the Parishes of St. Bernard, Plaquemines, Jefferson, St. John, St. Charles, St. James Ascension, Assumption, Terrebonne, Lafourche, St. Mary, St. Martin, and Orleans, including the City of New Orleans) Mississippi, Alabama, Florida, Georgia, South Carolina, North Carolina, and Virginia, (except the forty-eight counties designated as West Virginia, and also the counties of Berkley, Accomac, Northampton, Elizabeth City, York, Princess Ann, and Norfolk, including the cities of Norfolk and Portsmouth[)], and which excepted parts, are for the present, left precisely as if this proclamation were not issued. 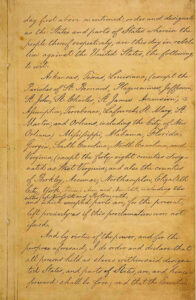 And by virtue of the power, and for the purpose aforesaid, I do order and declare that all persons held as slaves within said designated States, and parts of States, are, and henceforward shall be free; and that the Executive government of the United States, including the military and naval authorities thereof, will recognize and maintain the freedom of said persons.

And I hereby enjoin upon the people so declared to be free to abstain from all violence, unless in necessary self-defence; and I recommend to them that, in all cases when allowed, they labor faithfully for reasonable wages.

And I further declare and make known, that such persons of suitable condition, will be received into the armed service of the United States to garrison forts, positions, stations, and other places, and to man vessels of all sorts in said service.

And upon this act, sincerely believed to be an act of justice, warranted by the Constitution, upon military necessity, I invoke the considerate judgment of mankind, and the gracious favor of Almighty God.

In witness whereof, I have hereunto set my hand and caused the seal of the United States to be affixed.

Done at the City of Washington, this first day of January, in the year of our Lord one thousand eight hundred and sixty three, and of the Independence of the United States of America the eighty-seventh. 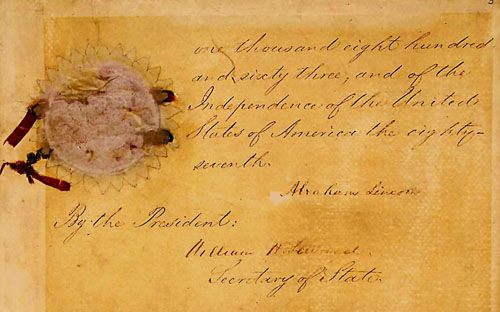 The five images posted above are Lincoln’s handwritten pages of the document. ~ Ed 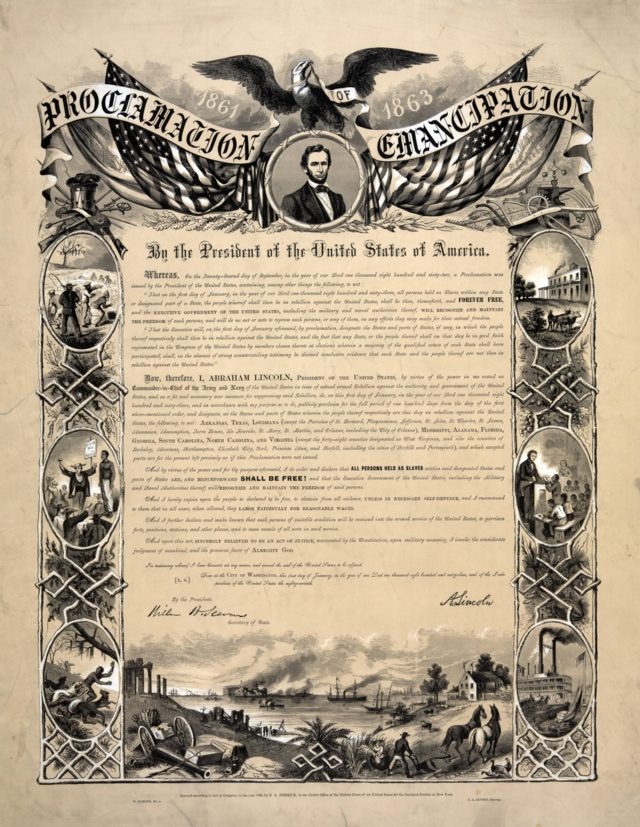