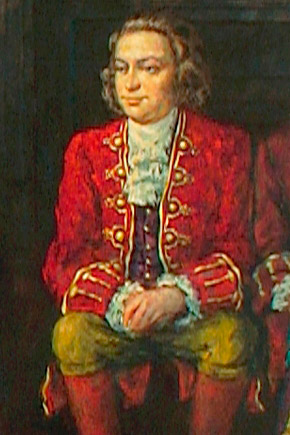 George Mason, “the father of the Bill of Rights.”

The amendments were introduced by James Madison to the 1st United States Congress as a series of legislative articles. They were adopted by the House of Representatives on August 21, 1789, formally proposed by joint resolution of Congress on September 25, 1789, and came into effect as Constitutional Amendments on December 15, 1791, through the process of ratification by three-fourths of the States. Although twelve amendments were passed by Congress, only ten were originally passed by the states. 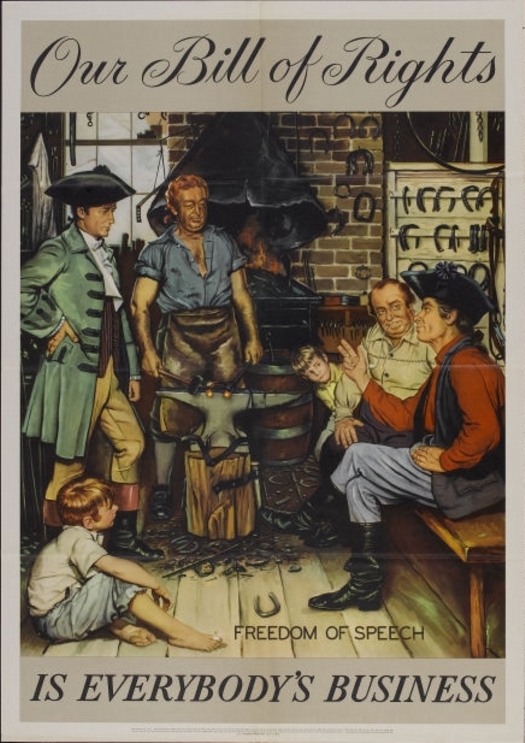 The Bill of Rights plays a key role in American law and government, and remains a vital symbol of the freedoms and culture of the nation.

On September 25, 1789, the First Congress of the United States therefore proposed to the state legislatures 12 amendments to the Constitution that met arguments most frequently advanced against it. The first two proposed amendments, which concerned the number of constituents for each Representative and the compensation of Congressmen, were not ratified. Articles 3 to 12, however, ratified by three-fourths of the state legislatures, constitute the first 10 amendments of the Constitution, known as the Bill of Rights.

Originally, the Bill of Rights implicitly legally protected only white men, excluding American Indians, people considered to be “black”, and women. These exclusions were not explicit in the Bill of Rights’ text, but were well understood and applied.

A careful examination of the document would reveal that four signatures are present at the bottom making the above statement incorrect. The four signers were:

Frederick Augustus Muhlenberg,
Speaker of the House of Representatives

Attest, John Beckley,
Clerk of the House of Representatives

Sam. A. Otis,
Secretary of the Senate 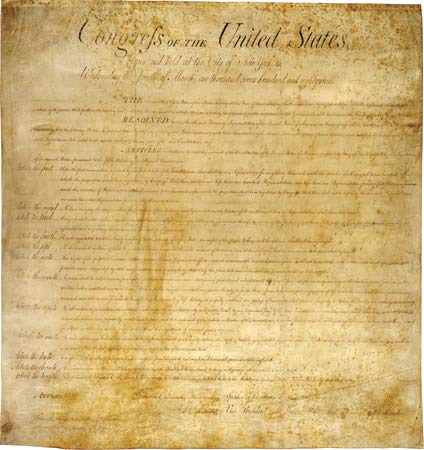 Congress of the United States

begun and held at the City of New York, on Wednesday the fourth of
March, one thousand seven hundred and eighty nine.

THE Conventions of a number of the States, having at the time of their adopting the Constitution, expressed a desire, in order to prevent misconstruction or abuse of its powers, that further declaratory and restrictive clauses should be added: And as extending the ground of public confidence in the Government, will best ensure the beneficent ends of its institution.

RESOLVED by the Senate and House of Representatives of the United States of America, in Congress assembled, two thirds of both Houses concurring, that the following Articles be proposed to the Legislatures of the several States, as amendments to the Constitution of the United States, all, or any of which Articles, when ratified by three fourths of the said Legislatures, to be valid to all intents and purposes, as part of the said Constitution; viz.

ARTICLES in addition to, and Amendment of the Constitution of the United States of America, proposed by Congress, and ratified by the Legislatures of the several States, pursuant to the fifth Article of the original Constitution.

Amendment I Congress shall make no law respecting an establishment of religion, or prohibiting the free exercise thereof; or abridging the freedom of speech, or of the press; or the right of the people peaceably to assemble, and to petition the Government for a redress of grievances.

Amendment II A well regulated Militia, being necessary to the security of a free State, the right of the people to keep and bear Arms, shall not be infringed.

Amendment III No Soldier shall, in time of peace be quartered in any house, without the consent of the Owner, nor in time of war, but in a manner to be prescribed by law.

Amendment IV The right of the people to be secure in their persons, houses, papers, and effects, against unreasonable searches and seizures, shall not be violated, and no Warrants shall issue, but upon probable cause, supported by Oath or affirmation, and particularly describing the place to be searched, and the persons or things to be seized.

Amendment V No person shall be held to answer for a capital, or otherwise infamous crime, unless on a presentment or indictment of a Grand Jury, except in cases arising in the land or naval forces, or in the Militia, when in actual service in time of War or public danger; nor shall any person be subject for the same offence to be twice put in jeopardy of life or limb; nor shall be compelled in any criminal case to be a witness against himself, nor be deprived of life, liberty, or property, without due process of law; nor shall private property be taken for public use, without just compensation.

Amendment VI In all criminal prosecutions, the accused shall enjoy the right to a speedy and public trial, by an impartial jury of the State and district wherein the crime shall have been committed, which district shall have been previously ascertained by law, and to be informed of the nature and cause of the accusation; to be confronted with the witnesses against him; to have compulsory process for obtaining witnesses in his favor, and to have the Assistance of Counsel for his defence.

Amendment VII In Suits at common law, where the value in controversy shall exceed twenty dollars, the right of trial by jury shall be preserved, and no fact tried by a jury, shall be otherwise re-examined in any Court of the United States, than according to the rules of the common law.

Amendment VIII Excessive bail shall not be required, nor excessive fines imposed, nor cruel and unusual punishments inflicted.

Amendment IX The enumeration in the Constitution, of certain rights, shall not be construed to deny or disparage others retained by the people.

Amendment X The powers not delegated to the United States by the Constitution, nor prohibited by it to the States, are reserved to the States respectively, or to the people.